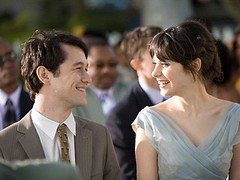 500 Days of Summer is a clever role reversal of the Adam-Eve chemistry and I was frankly surprised by how good the film turned out to be. Extremely inventive in its editing and story-telling, this film also boasts of a memorable soundtrack, right from its title credits to the closing ones. Call your date home, play this DVD, grab some popcorn, sit back and enjoy the movie. It’s a film worth revisiting again and again. Nominated at the 2009 Golden Globes for Best Motion Picture - Musical or Comedy.

500 Days of Summer must be the most circulated / rented DVD amongst the Siddharth Anand, Punit Malhotra, Karan Johar types. It’s a very obvious film to remake for Indian audiences - probably starring Imran Khan. The rom-com colours, quirky screenplay, crisp editing, non-linear story-telling and ability to laugh at itself, does a very neat invertendo of the Adam and Eve romance.

Unlike the cliches cast in stone by Pyar Ke Side Effects, in this film, it is Eve who is commitment phobic, wants a relationship that is casual and relaxed, whereas Adam is emotional and wants something long term. He is the one who asks the question that guys are so scared of: “So where do you think this is headed?” or “Are we a couple?”

On DVD, 500 Days of Summer is a breezy, often humorous and sometimes introspective film to sit through - almost perfect if you’re calling your date home. Right from the casting, apt for puppy love - Joseph Gordon Levitt (Tom) and Summer (Zooey Deschanel), to the picture post-card cinematography, to the odd Farah Khan-esque choreographed number (All I want is you), to the other lilting melodies in the soundtrack, to the inventive interception of the voice-over that navigates so effortlessly between the past and present, this film is right up there on the freshness quotient.

Director Marc Webb, who is helming the next instalment of Spiderman, has interpreted the script well. After a long time, here is a story about love (not a love story, mind you) that makes you think about reversal of roles.

How would it be if we boys became a cling-on, refusing to move-on, commitment-desirable types and the girls wanted nothing serious, very casual and use-and-throw relationships? That’s like a Harry Met Sally, upside down. Scary thought, if you ask me. The fact that Tom is the woman in the relationship is established by some fabulous touches. I felt really sad for him. A little heartbroken.

Summer’s character is unique. Deschanel plays Summer to a T - she’s a little eccentric, flirtatious and her long casual gaze and dialogue delivery is the most unusual I’ve seen among actresses.

I’d have loved it if the screenplay had added a stronger back-story for her - The explanation given was a little insufficient a reason to make her that way. Why hasn’t she felt love with men she’s been with before? What has made her immune to the most genuine, honest advances of a guy like Tom?

The writers of the film don’t tell us this, but hint at possible answers. A message they strongly advocate in the film is that love may not be a real thing after all - it exists as a fantasy in our minds and our expectations from love are only fuelled by pop-songs, movies and the romances we read about.

The DVD is a bit of a disappointment in terms of Bonus Features - there are just some extended / deleted scenes, but they really don’t work their charms like some behind-the-scenes footage would have. Webb’s direction managed to immerse me in the lives of the characters, and some interviews with the cast would have been refreshing. Sadly there’s none nor any dope on the making of the film.

The film has ‘feel-good’ written all over it - the songs are a big help - and I’d certainly classify it as a recommended viewing.

Yay! Thumbs Up, by JJ : fresh and different!!