There isn’t much to be enthralled about in the sequel to 300; 300: Rise of An Empire is a bit of letdown in almost every manner, except for a surprisingly thrilling turn by Eva Green. Watchable enough for hardcore fans of the genre and the first film, but the lower your expectations are, the better.

In a movie that is expectedly all about the violence and bloodshed that its prequel so gorgeously glorified, you’d think that you’d walk out of 300: Rise of An Empire thinking about all the red you saw.

On the contrary, the most striking thing about the sequel to 300 is Green; no, not the colour. I’m talking about Eva Green, who delivers a knockout performance – relatively speaking – as the battle thirsty commander of the Persian naval forces, who are out to raze all of Greece to the ground.

In fact, it is so unfair that war is considered the domain of men; because in this film, the women quite clearly outshine them. Even Lena Headey, reprising her role as Queen Gorgo, gets very little screen time, but still is far more impressive than the men-folk in the film. 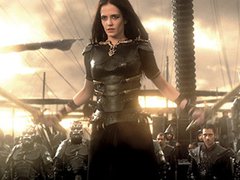 A lot of the events in this film actually occur at the same time as what we saw in 300. As Leonidas and his brave, but limited, band of Spartans take on the might of Xerxes at the Battle of Thermopylae, Athenian general Themistokles is waging war with the Persian navy, commanded by the ruthless Artemisia. The film makes big work of this rather thin plot, though, as it flashes back (and even flashes back inside a flashback) to show the lead up to the events of the film.

While the film eventually does serve up plenty of what one would expect – grand, gory action scenes in extreme slow motion – the film more than disappoints with its writing. Despite having some terrific opportunities on the story level – like 300, this film is also based on a cult graphic novel by Frank Miller – the team of writers and director Noam Murro treat it in the most ham-handed manner. They quite clearly were just itching to get into the fight scenes, more than anything else.

The film only briefly glances at the rise of Xerxes and how he came to be called a ‘God-King’, which is mentioned in 300. There was so much potential there, as well as in his complex relationship with Artemisia, that it almost seems like pity that so much screen time was wasted watching blood spurt in every conceivable direction.

Even the story of Themistokles seems intriguing enough to warrant more meat in the screenplay. Apart from the fact that Sullivan Stapleton, who plays Themistokles, lacks true charisma, his story itself is glossed over, in favour of – you guessed it – slashing, slitting and piercing human flesh.

Still, the film would have been far more fun if the action was at least of the quality of 300. However, that is quite not the case. Most of the film occurs at night, so the action scenes are too dark, and just not as eye-catching as what one would have expected. Add to that the 3D glasses, and you’re often straining to make out what is actually happening, even though you have the general idea that metal is making contact with body.

Eve Green’s Artemisia, then, remains the most fun thing about 300: Rise of An Empire. She snarls, fights, smirks and oozes raw sexual energy that is never quite given free reign – except for one rather terrifying kiss – and most of its enigma lies in the way it is held back. The film itself ends on a note that quite surely suggests that a third film is on its way. A chance to make amends, for sure, but by the looks of it, expecting much would be pointless.

Great review. Name of the movie 300: Rise of an Empire sounds interesting. Think I should watch the movie.

Joya has given this movie a Yay! Thumbs Up(99). Joya has posted 2 comments and has rated 2 movies. See Joya's page for more details.