3 Days To Kill, directed by McG, is a predictable action-thriller about an ex-CIA agent with family issues. A silly, sometimes funny, but mostly pointless film, it is mercifully brisk and short, making it an easy watch.

Liam Neeson must've been busy when they were casting for 3 Days To Kill; for this role seems right up his alley. That's the first sense you get as you settle into the film and get acquainted with soon-to-be-ex-CIA Ethan Renner, played by Kevin Costner. Because, you see, Ethan has daughter issues.

Yes, on paper there's very little about Charlie's Angels director, McG's latest film that you haven't seen or heard before. And like most CIA/espionage/high-stakes-crime based films, this one too is prone to many lapses of logic.

What makes the film not so difficult to sit through is the undercurrent of humour running through it. Combined with Kevin Costner's deadpan portrayal of his character, it gives some genuine laughs, something that really surprised me, considering the CIA backdrop that the film promised. 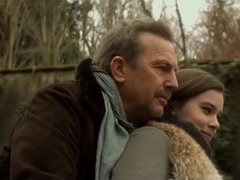 After a point you realize that the silliness is rather the point of the film than a flaw in it. Ethan Renner, after quitting the CIA, is again enrolled for one last job, with a carrot that is dangled before him; one he just can't say no to. In the midst of it, he attempts to patch things up with his estranged teenage daughter Zooey. All of this, for some reason, is set in Paris - which at least lends the film a certain amount of texture in terms of place, even if it is on a superficial level.

Ethan's relationship with his daughter is devoted nearly as much time as the action portions of the film, and most of the humour in the film is derived from how they end up intersecting a few times. Interestingly, these two threads of the film are also shot and cut quite differently. The portions with his daughter have a warmer, slower feel to them, while the CIA bits have a cold colour tone, with rapid cuts (which are often random and distract from the action.)

In the middle of it, there is the mysterious CIA operative Vivi, who actually recruited Ethan for this one last job. She has an inexplicable air of mystery about her, in terms of what she wears and where she spends her time, none of which is ever explained properly.

The biggest letdown of the film, once you get used to how silly it is, is the fact that a lot of mystery is built up, but it all fizzles away for a lame, predictable ending. There are many unanswered questions but you're too bored to ask them anyway. The film is, in fact, predictable for the most part, save for one sudden pre-climax twist that you never expected initially - but seems obvious in retrospect.

Again, it is left to the humour in the film to make it tolerable, which it does. Costner and Hailee Steinfeld, who plays his daughter, have an easy chemistry about them. There is no real depth to the father-daughter relationship, but it still makes you smile. Amber Heard as Vivi looks stunning, but all you can think about is what is the point of her at all. The film is also sorely hurt by the lack of a clear and powerful antagonist to Ethan Renner's character.

You experience the film, then, not knowing if it has any point at all. In fact, I couldn't shake off the feeling that I was watching a silly Hindi rip-off of a mediocre Liam Neeson thriller. That, really, sums up the 2 hours of 3 Days To Kill.