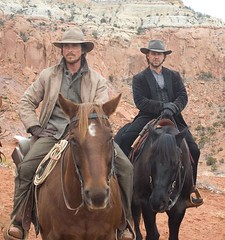 Gritty, realistic action movie, set in the Wild West. A glorious film, embodying the best of a genre that has nearly vanished from the screens.

For some reason, the Western as a Genre of film making has all but vanished from our screens (the writer has his views on the subject, but that would constitute a different article!). The Western was the quintessential embodiment of the Great American myth; the promise of the New Land, the wide open Frontier where a man could become rich irrespective of his class and background, and of Men who in wild and brutal times, stood for justice and fair play that was the heart of the American dream. They featured the lone Hero, who stood up for truth and honour and acted with courage when required. The Western genre has been used as an allegory (High Noon – 1952) and also as an ode to the Romantic outlaws who had to give way in the face of commerce and early capitalism (Sergio Leone’s all time classic, How the West was Won, and Sam Peckinpah’s spectacularly bloody The Wild Bunch). Clint Eastwood gave the genre another twist altogether in the 1990’s with Unforgiven, a dirty unflinching look at the entire myth of the Western and the American Dream. And now after years, we have 3.10 to Yuma.

Director James Mangold has helmed several films before, but never a Western. Indian viewers might remember Identity, a complex murder mystery, which was on show around five years ago. Let me state right at the outset, this film is not an action film. If as a viewer you are interested in chases and gunfights, well, then this film is not for you. This is not to say that there is no action; in fact it has a first rate stagecoach chase, quite a few gunfights, and a great climax featuring lots and lots of guns and shooters. But the difference is that the action is not meant to entertain and elicit “oohs and aahs”, but is instead used to give us insights into the possible personalities of the characters. This requires a well forged screenplay which pays attention to small nuances to delineate characters and also an accomplished director, and it is here that both Mr. Mangold and the writers distinguish themselves.

The screenplay works wonderfully to give us a whole bunch of people whom we remember long after the film is over. A ruthless and yet quite honest criminal who is also a charmer when it comes to women, a war veteran rancher deep in debt, a veterinarian who cannot shoot, a grizzled bounty hunter on contract, a trigger happy young outlaw, the young but somewhat fearful railroad man, an adolescent boy struggling to be a man; they somehow seem so real and present, that you empathise deeply with them and their circumstances. The director has followed one of the truisms of cinema, about cinema being all about reaction rather than action, and he gives us tight close ups of the characters’ faces, as contrasted to the panoramic country that they are traveling in. The dialogue is laconic and terse, and weaves in themes of justice and morality.

The film does not sing hosannas to the American dream; instead it very subtly shows us the hypocrisy, the exploitation, and the greed that made America what it is today. There is a sequence where we are shown Chinese laborers building railroad tunnels, cheap labour that was brought to America to build most of its railroad and also work the mines. In a passing shot we see an encounter between the young adolescent white boy and a Chinese laborer of nearly the same age, and the reaction on their faces says it all, about race and class. We also come to understand that law and legal rights are almost always subordinate to economic interests.

Russell Crowe is outstanding as the bad guy Ben Wade, his puffy face and the lines around his eyes speak volumes about his dissolute, yet intelligent personality. Christian Bale’s hard planed face is something that is not easy to forget either; his misery and anguish come through in his muttered dialogues and in the set of his jaw.

The film ends in a bloody and brutal climax which is well staged and leaves us feeling vindicated, in a manner that we really do not understand. Again here the director shows his class, the final interactions between the outlaw and the rancher as well as the closing scenes, weave in the earlier themes and bring them to a most satisfying resolution. The end remains true to the genre; about how Men must make their stand irrespective of how the bullets may fly and what it means to be a Hero.

Thank God for the Bollywood multiplex brouhaha, let us have more such films please.

PS And for all those who love pulp Western novels and films and the guns that feature in them, this movie has the works, the Spencer carbine, Colt revolvers, Remington sawed off shotguns, and the Gatling.

Yay! Thumbs Up, by Monica

A debt ridden rancher agrees to escort a criminal to the nearest rail head to put him on a train to Yuma.