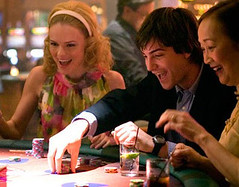 Based loosely on the real-life story of a group of MIT students who ended up taking on Vegas casinos at their own game, 21 offers an entertaining alternative to the usual muliplex fare.

Jim Sturgess stars as Ben Campbell, MIT grad student and aspiring Harvard entrant, who finds himself swept up into the secretive MIT Blackjack team. Sturgess puts in a nicely layered performance, appearing equally believable as his character moves between geeky college boy and Vegas high-roller. Kate Boswoth chips in as likeable fellow team member Jill Taylor. Sadly, despite a decent performance, Bosworth finds her character mainly utilized as the love interest rather than as a strong female lead.

Of course, a nemesis is required, and Laurence Fishburne is well suited to the role of casino security chief Cole Williams. Despite not much material to work with, the ever-reliable Fishburne gets the job done and brings depth to his character.

Although inspired by the real-life adventures of the MIT Blackjack team, 21 is still very much a dramatized account. In fact, there has been some controversy surrounding the Hollywoodization of the story; particularly in the ethnic makeup of the cast. In real life, the MIT team members were predominantly of Asian-American descent. But in the movie account, the key players are caucasian.

Controversies aside, director Robert Luketic ensures that the story rolls along smoothly and does a skillful job of explaining the statistical principles behind card counting without boring the audience.

Of course, whenever card games are depicted in cinema, there’s always some explanation required, even for a game as simple as blackjack. In 21, this exposition is less clunky than say, in Casino Royale, but it’s still there. Still, in the trade-off between clarity and economy, Luketic makes the right choices.

Despite this, several of the scenes rather feel like they were shoehorned in to perk up the drama. I have sympathy for the filmmakers here – how do you sustain audience interest for two hours in a story about college kids playing cards? – but it’s not hard to spot the melodramatic scenes injected to add spice to the story.

On balance, the movie is well-paced and still keeps a few surprises in store along the way. It also poses a few interesting questions - how does money change us? What really counts as ‘winning’ or ‘losing’?

As welcome departure from the usual roster of summer blockbusters, 21 is well worth a watch.

This review is by guest reviewer Paul H. Paul is an international man of mystery, he comes from the UK and lives in Pune. Paul H also blogs at http://worldofpablo.com.