Takes a shot at creating humour around honour killing. The ridiculously elaborate plan to stay alive is amusing but also is only as executable as you’d think—making the film predictable. Yet, it keeps you worried about the protagonists, which is the film’s biggest win. (Available on Zee5)

Arguably, the title 14 Phere gives the movie away. And even if we say it doesn’t, then the intrigue created by the title is completely satiated in the trailer. This gave me the impression that the execution will have interesting moments strewn across its length. Unfortunately, that doesn’t happen. On the other hand, though, Sanjay (Vikrant Massey) and Aditi (Kriti Kharbanda) get you worried. You want them to be safe and have your heart in your mouth till you know the end is near.

Some nice details feel like stand-alone sides rather than merging with or adding value to the main point of the film.

Of course, Massey and Kharbanda’s charm individually and together make that happen/ The side characters’ amusing performances help too. This entertainment is largely owing to their talent as actors rather than deep characterisations or craftily-written situations. You know what will transpire in the next hour or so. So, you are only waiting for how it will happen in the last twenty minutes. And you are hoping that the hour before will have some situations that will provoke thought or poke a funny nerve. Alas, the one-line plot description is the entire story.

We cut through the background within the title sequence and land right at the crux of the conflict. This setup is certainly not new to us. If not from real life, we know of families' disapproval of one’s choice in partner from our movies. From serious takes like death by suicide and honour killing to more modern takes like the young couple holding their ground till the parents give in—we have seen a spectrum of solutions.

14 Phere gives the situation a unique spin, which holds a lot of potential to entertain. At a superficial layer, it looks like the film wants to be different just for the sake of being different or portraying the maker’s and audience’s frustration with the same old story. Eloping is passe. Killing is done to death. What else could a couple do?

While you watch Sanjay and Aditi make a presentation of their wedding plans, you marvel at how ludicrous, improbable and unfeasible their alternative to running away is. But you also realise why it is important. It is this almost prank-like plan, or be shot or burnt to death if not cut into tiny pieces. 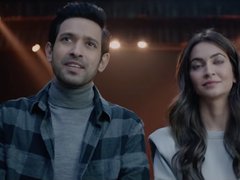 Here begins the hint of a social commentary. The young couple is trying its best to balance the love for each other with the care for their family. Sanjay makes an observation about his mom’s life that is so ingrained in real life that no one considers including it in a film.

Similarly, the film includes wedding festivities and details that Hindi films usually skip. For instance, the groom’s mom and other women don’t attend the actual wedding and stay back to ready the house for the new bride. The bride is not allowed to rest at the end of the most tiring day of her life. The groom’s sisters ritually block the way to the couple’s room to tease the new couple.

Alas, the one-line plot description is the entire story.

Such details, though, are not enough to add weight to the film’s basic storyline. They feel like stand-alone sides rather than merging with or adding value to the film’s main point.

And this could have still worked as finer points if I hadn’t known the entire plot before I even began to watch the film. 14 Phere’s trailer gives way too much away. I understand the point of the film was not to build it up as a thriller. But, then there is very little to hold interest without that intrigue.

So-So, Bolly Spice : ...As I said, I do wish there was more rom but I am so happy that there is a rom-com, that is not a ‘new way’ to tell a rom-com story. It felt like a classic Bollywood film and I loved it! Some missteps but in the end I really enjoyed it!... full review

So-So, by Rahul Desai, Film Companion : ...Other elements feel half-hearted. Like Sanjay’s stage-acting passion – which exists only so that the plot can include the audition montage. Or the coincidences – an early chance encounter between Aditi’s brother and Gauahar’s Zubeena, for instance, is poorly executed. The performances are easy. Massey is functional, but Kriti Kharbanda’s constant use of “yaar” rings hollow to the ears. The two seem to be saddled with characters who sound like woke versions of sanskari kids, if that makes sense. In pursuit of the prettiness of mainstream Hindi cinema, they sound perfectly progressive and urban in the big city – the small-town roots are barely visible – but appear as convincing as teenage Twitter threads while reasoning with their elders. The dissonance is stark. It’s like nothing exists between the lines. The film is only what we see – nothing more, nothing less. It’s why I never bought the “every scene must have a purpose” rule. Somewhere along the way, a story loses its spirit – and identity. And reviews end up using vague adjectives like “weird”. It’s a vicious cycle.... full review

So-So, by Madhuri V, Filmi Beat : ...Rekha Bharadwaj's soulful voice coupled with Shloke Lal's beautiful lyrics makes 'Ram Sita' a melodious hear. The 'Chamak' song might grow on you after repeated listenings. The rest of the soundtrack fails to register on your lips... full review

So-So, by Avinash Ramachandrani, indian express : ...Even as the curtains close with all the characters smiling, I couldn’t help but think of a bunch of what-ifs. Hope all’s well with what actually only seems like it ended well.... full review

So-So, by Manisha Lakhe, MiD DAY : ...ou know this film is not going to bring about any social change nor is it trying to create awareness about social issues related to inter-caste marriages. This is a fluff film to be enjoyed as if it were candy floss. Watch it because there is something new on Zee 5 and you have a couple of hours before the episodic K-drama, or whatever it is you watch diligently, drops its new episode. I don’t think this is a movie you will watch again twenty years later, but if you watch it now, you’d have a smile on your face and be happy you did.... full review

So-So, by Avinash Lohana, Pinkvilla : ...14 Phere does has its share of flaws, but overall it makes for pleasant viewing. A one-time watch is a rather apt description for this social comedy-drama.... full review

So-So, by Anita Aikara, Rediff : ...The movie delivers on the feel-good factor, but if you are looking for ground-breaking humour, it will fail to work its way into your hearts.... full review

So-So, The Quint : ...Caste is at the center of 14 Phere too but writer Manoj Kalwani’s writing resolutely tiptoes around it throughout. Mostly meh, with some portions particularly frustrating, it’s the reason why the story never truly coalesces.... full review

So-So, by Saptaparna Biswas, Times of India : ...Overall, the film would certainly appeal to those who love family sagas and shaadi dramas. Due to its simplistic portrayal of characters and clean comedy, it can very well be a weekend family movie time pick. Yet, better writing and some good dialogues could have brought about some noteworthy performances, given the relevance of the theme... full review

Thumbs down, by Anupama Chopra, Film Companion : ...Right after this emotional high point, the scene cuts to Aditi’s father talking to cops about the search for his daughter so he can kill her. The dissonance gives you whiplash. Later, Aditi reasons with her angry father – agar honour bachi hui hai toh kahe ki killing? When her brother instructs someone to throw petrol on Sanjay’s parents, the man asks: Asli wale pe ki nakli wale pe? I’m all for dark comedy but honestly, it was hard for me to find humour in this. It doesn’t help that Kriti Kharbanda, who plays Aditi, doesn’t have the acting chops to match Vikrant’s ease or conviction. She works like an overtly glamorous presence in a part that required more authenticity. It’s up to Vikrant then to save the day, but some tasks are too Herculean even for an actor as fine as him.... full review

Thumbs down, by Shubhra Gupta, indian express : ...Bit characters come and go in this convoluted plot. Sanjay’s cousin does a nice job of a cocky young lad. Aditi’s brother is good at bluster. Gauahar Khan leaps off the screen, even in her limited, sadly unfleshed role. Some of the accents are spot on. But between the long-drawn, wholly preposterous idea of fake ‘baraatis’, and two ‘shaadis’ (therefore, ‘chaudah phere’, geddit), there’s just confusion. And the whole comes off as plain tiresome... full review

Thumbs down, by Umesh Punwani, koimoi : ...all said Done, 14 Phere is a rom-com designed to be a ‘tragedy of errors’. The major problem lies when the script takes the actors for granted, relying way too much on the story. Couldn’t even recommend this for the performances... full review

Thumbs down, by Mayank Shekhar, MiD DAY : ...It’s probably meant to be a comedy of errors, but there are strictly no laughs. I can’t recall the songs. The romance is over, anyway. All they’re interested in is marriage. So what’s the point? Abhi kya? What else; inka vivaah! Toh phir? Nothing.... full review

Thumbs down, by Saibal Chatterjee, NDTV : ...Massey and Kharbanda make a passable pair and the supporting actors, notably Vineet Kumar, Jameel Khan and Yamini Das (as a silent, submissive woman who is a far cry from the garrulous mother/mom-in-law she played in the recent Haseen Dillruba) hold their own. But the performances cannot escape the brunt of the banal.... full review

Thumbs down, by Nandini Ramnath, Scroll.in : .... Vikrant Massey works harder than is required, while Jameel Khan, who is too gifted for this sort of thing, is wasted as the duplicate dad who cringes at Zubina’s hamminess. He isn’t the only one.... full review