George Clooney's fifth directorial effort, The Monuments Men, is a film that promises much more than it eventually delivers. The WWII setting and ensemble cast can't save the film from being the disappointment that it is.

The most audacious stories are often found in real life; and when these stories are adapted for the screen in the right manner, they usually have what it takes to enthral viewers. Ben Affleck's Argo, for instance, was the perfect example of how a real life tale can be adapted to make a thrilling film.

A cursory glance at George Clooney's latest, The Monuments Men, can make one feel that the film has precisely what it takes to deliver what Argo did - a hooking World War 2 based premise and a cast that has the chops to pull it off in style.

Think about it - an unlikely bunch of non-soldiers are brought together and sent in to World War II Europe to retrieve valuable pieces of art that were stolen by Hitler's regime, on his orders. Picassos and Rembrandts and Michelangelos; artworks that are like the markers of humankind's cultural progress; art that, if lost, would be like a loss of a fragment of humankind itself. 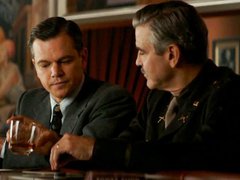 Yet, at least in cinema, there is but a thin line between subtlety and exaggeration; and in choosing the former, Clooney ends up making a staid film that is underwhelming at best.

Of course, it was rather brave of Clooney to choose the understated manner in which he chose to narrate a story that had enough in it to become a thrill-a-minute heist film. Hollywood studios aren't particularly known to favour the kind of narrative style he has chosen. The film has its heart in the right place, but ends up becoming a victim of its own manner. The question, really, is how subtle is 'too subtle'.

The film doesn't particularly have a graph; you expect it to rise and rise as it progresses, but it never does. You expect it to lead you to an exciting finale, only to leave you disappointed. Laced with a few genuine smile-worthy moments and with a large amount of respect for the masters of art, the film focuses more on instilling an awareness about just how important our art is, in the overall story of humanity.

Despite taking us through familiar people and places - at least from history textbooks, if nothing else, the film fails to truly engage and connect. In fact, the film is set in the fag end of WWII, when Germany had begin to withdraw a lot of their European occupation. The stellar cast - Clooney himself, Matt Damon, Jean Dujardin, John Goodman, Bob Balaban, Bill Murray and Cate Blanchett, amongst others, do a great job - precisely what was expected of them. However, the film jumps between their stories too often, which concurrently means that no particular character stays with you once the film is over.

As director, Clooney is certainly maturing with time. He easily seems more in control than he did in The Ides of March, for instance. As I mentioned earlier, the route he chose to narrate this particular story is a brave one; a world away from the one chosen by Affleck in Argo. One wonders though, whether it is that which proves to be the film's biggest undoing. Including the audience and evoking a response only in rare spurts, The Monuments Men is mostly just bland.