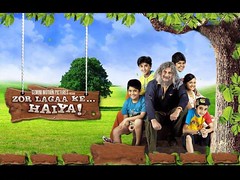 The new age schools certainly do a better job of making environment education more fun than this kids' film! And of sensitizing them to issues like poverty too. Very in the face and forcefully shoves values down your throat.

The words TRANSLUCENT replace the words 'Jai Ho' in the OSCAR-winning tune. And this is how my child is taught the meaning of translucent in his school. Educative, entertaining and to-the-point.

Compare that to a film which is, in all likelihood made to entertain. Its target audience is obviously kids under 12. And all they do is moralize. Okay, mercifully there are no parents lecturing children, it's the other way around. And how? Not more than one or two adults amongst the entire cast and supporting cast of 50+ care about environment. And all, note ALL kids can lay down their lives to save the planet.

If this one-dimensionality across characters was not enough, too many sub-plots are left without any closure - making you wonder why they were there in the first place. Not that you wanted more scenes with a huge sermon but at least some kind of an arc to the story would have helped.

Again, the main story doesn't have too many ups and downs either. It starts with an issue, moves on the another one, magically resolving the first. Then it stays with the other one and drags ad nauseam.

All child artists behave like kids who are practicing their lives' first skit at school - conscious yet self-important. The kids aren't given cute stuff to do either. The kind that would make you smile and at least keep you engaged, in the meanwhile. There are a number of references and spoofs of popular Hindi films, but I doubt many children would get the references because they might not have seen the original. And they are way to amateur and dull for adults to enjoy.

Also no where are the happenings anywhere close to reality. For example, that these kids have parents who watch out for them, or look up on what they are up to at least once in a while, comes forth only in the last sequence.

The climax though interesting because of its satire and the underlying truth is too late to redeem any part of the film. This is one of those that your kids might watch once and forget it soon-soon.

Thumbs up, by Chanda Gohrani, AOL INDIA : ...I would recommend ‘Zor Lagaa Ke Haiyaa!’ for children as well as adults.... full review

Thumbs up, by Sampurn, New Kerala : ...It is a fine effort by debutante director Girish Girija Joshi and deserves a huge applause.... full review

Thumbs up, by Goher Iqbal Punn, Radio Sargam : ...All the kids perform with such a ease that you love to say hats off to them.... full review

So-So, Times of India : ...Too much bhashan, loads of gyaan... full review

Thumbs down, Movie Talkies : ...Zor Lagaa Ke…Haiya is one of those films which fails to exploit its excellent premise.... full review

Thumbs down, by Joginder Tuteja, Now Running.com : ...Frankly, one expected a little more meat in the story around it's culmination... full review