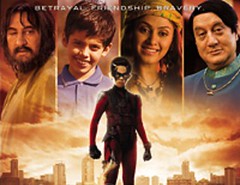 wogma rating: Add to “To Watch” list, watch some day (?) - That too for kids only, adults don't bother.

Harry Potter meets Krissh meets not-so-Home-Alone, unfortunately in a very superficial, blah sort-of a way. And yet, there is enough for the under-10s to enjoy indoors on a hot summer day.

The set-up is as Harry Pottery as it could get. Orphaned child is used as a house servant by close relatives. He has two friends who make life livable for him. The plot deviates from here into bizarre situations. And somewhere in the strange world created, science is given all the credit. But, in the eyes of a 10-year old, it must all be fun. So, it'd be all right for kids to watch it when it comes around on TV.

My issue with most of our stories is the lack of attention to detail. So our superhero 'zokkomon' doesn't have any superpowers, all he has is stuff enable by science. How then does he emit pretty lights around him? Maybe I'm just too scientifically challenged.

But, it's all good because kids will oversee such stuff. They'll just be awed by the cool things this boy their age can do. That's what it looked like from the reactions of the kids sitting beside me. They were getting scared, exhilarated, laughing at all the intended points. And if it has worked for the target audience, it has worked.

I think what worked is that the superhero didn’t go beyond his age; the pranks he played were well within a child's imagination. He stayed that age, he didn't grow up suddenly into doing larger than life stuff. Darsheel Safary's charming, not-overly cute persona works well with what he has to do in and as Zokkomon. And he's a good performer too. I loved his expressions in the roller coaster ride.

On the other hand, Anupam Kher was annoying as Deshraj. I think I have something against obvious wigs. But his role as Magic uncle was pretty amazing. His makeup was awesome and so was his demeanour. A pity that our writers don’t believe in character-building. It's not like they can't or they don’t know how to, because they started something really interesting by having the yin and the yang, in the form of science and emotions. But it's not taken any further, there's no high point of conflict.

Oh well, maybe that's too heavy for a kids' film. For what it is, the film is not good enough to haul the kids to a theater and cough up for the mandatory popcorn and soda. But it's perfect for a 2 hour off-time from kids when it plays on TV.

Thumbs up, by Nikhat Kazmi, Times of India : ...The performances too are warm, with Darsheel adding spontaneity and a charming vulnerability to the lonely superhero act. ... full review

So-So, Best Of Bollywood : ...Do not go with high expectations, this is just average stuff... full review

So-So, by Bobby Sing, Bobby Talks Cinema.com : ...Still looking at its fine production values and good enjoyable performances you can watch it with your kids but preferably after its official DVD release. ... full review

So-So, by Smita, Desi Martini : ...But my main grouse with the movie is the lack of logical explanations for the things that happen.... full review

So-So, by K N Gupta, SmasHits.com : ...The movie's co-writer and director Satyajit Bhatkal deserves a pat for making a children's movie with the best special effects. However, he fails in giving the plot a concrete shape.... full review

Thumbs down, by Subhash K Jha, Bolly Spice : ...The ineptness of the special effects is surprising considering the film comes from the reputed international producers Walt Disney.... full review

Thumbs down, by Payal Khanna, Desi Martini : ...waste of such good actors as they did not have any scope. ... full review

Thumbs down, by Anupama Chopra, NDTV : ...I think co-writer and director Satyajit Bhatkal meant Zokkomon as an empowerment fable for children and a paean against black magic and superstition but the film is just too clumsy. ... full review

Thumbs down, by S Rohatgi, Now Running.com : ...Not only does it have a weak plot, it defies logic. ... full review

Thumbs down, by Preeti Arora, Rediff : ...But a lackluster script and an overdose of clichéd situations turn this film into one more 'preachy affair'.... full review

Thumbs down, by Anuj Kumar, The Hindu : ...Also, we never get to know the logic behind rechristening Kunal Zokkomon in a place where people speak chaste Hindi and the kids are not shown watching any cartoon channel. ... full review

Viv_Bag: Zokkomon, we will never be able to make a good Kid Movie here, even if Disney tries it here...melodrama, bull shit

r1kartik: Not bad I say for a first time superhero movie. But wud have expected more attention to detail from Disney #zokkomon

firesail25: one of the worst ,idiotic movie of all times coming out today -#zokkomon

AmyBakeswithMom: Review: Zokkomon is another dud for Darsheel: Good versus evil. The age old theme of all superhero films. And ki... http://bit.ly/gWTK2H