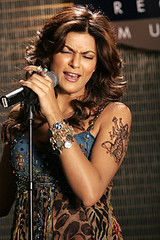 Take away Sushmita and the rating falls to the last slot…that’s how much the movie is about Sushmita and her much-publicized rock star character, Kria. Sushmita’s acting evokes emotion - the audience smiles when she is happy and tears swell up when she is sad. It sometimes feels like you are seeing a slice from her real life. She looks gorgeous too - not breathtaking-gorgeous, but wow-she-is-so-sweet-gorgeous. She has designed her own outfits and they are dazzling. A Sushmita fan might not want to miss this one.

For the rest, though, there is nothing much in there. Yes, Shiney Ahuja plays the doctor well, but since the story is all about the rock star, he can do only so much. He has some really insightful lines, especially when he is in the narrator mode. The other character artistes are just too loud and exaggerated. Most of them are have unnatural characters. Moushmi Chatterjee needs to do something about her diction.

One of the best things in the movie comes towards the end. It is the symbolism between a poem that Kria is writing and the situation she faces, this is played out very artistically.

The screenplay is very stretched out. There are many scenes, where the audience has enough time to think and say, “Okay, got the point, next please!” The story is different and good, but the end is so prolonged that we realize what the climax is going to be an hour before the movie finishes. The suspense therefore is effectively ruined! Then, you just sit there waiting for it to happen.

Of course, no opportunity is lost to put in a song. And why not? They have the perfect excuse! The atypical music is very easily overshadowed by the lyrics. To the eye though the songs are not much of a treat. The song that introduces Sushmita starts off as her performing on a stage and then becomes more like a video album giving it a very artificial look. Was somebody trying to save money by not doing a crowded, rock-show scene right through the song? And what’s with supposedly sensuous songs amongst unusually long white curtains?

Not all the technical nuances are handled well. While most of the medical information given out sounds close to reality. But then, when there is a person dying, isn’t a doctor’s first reaction to take him/her to the hospital?!? There are flaws on the rock star side too. Like, can a rock star break into song wherever she pleases, isn’t she bound by contracts?

Thumbs up, by Subhash K. Jha, Glamsham.com : ...But I wonder if it would've worked so well without the amazing Ms Sen!... full review

Thumbs down, by Aparajita Ghosh, Apun Ka Choice : ...Far from rocking, the movie doesn’t even stir or shake you.... full review

Thumbs down, by Taran Adarsh, IndiaFM, indiainfo.com : ...Sometimes, a thought-provoking idea doesn't reach the winning post due to the writer's inefficiency to narrate a poignant tale.... full review

Thumbs down, by Gaurav Malani, J.A.M : ...screenplay could well have been completed in just hundred pages and the movie could have been half its runtime length making it crisper and gripping.... full review

Thumbs down, by Deepa Gahlot, Sify Movies : ...Funding and opportunities in mainstream cinema are so tough to come by and Tanuja Chandra has consistently been making films...but is yet to come up with a credible and memorable female protagonist.... full review