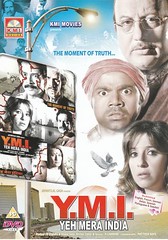 A day in the life of Mumbai. Its ups, downs and in-betweens are handled with care, sensitivity and yet shows the filth that needs to be cleaned up to make this a better place to live in. Despite this it remains a be-as-it-may, this is home and I love it.

Capitalism vs. communism, Dalit vs. Brahmins, Rich vs. poor, man vs. woman, North vs. South, fatalism vs. cynicism vs. self-believer, good vs. evil vs. not-so-good - and but ofcourse, Hinduism vs Islam vs. secularism. Yeh Mera India deals with all these concepts and more in its 130 minute run and does it fairly too. It employs some twenty odd characters and twines their lives together to make a believable albeit idealist picture of one city in this country.

It’s a very enjoyable collage of characters that make up Indian urban life - from the middle-aged woman watching repeats of soap operas, to young career-minded woman aspiring to get away from Indian way of life. The creepy, cheesy bastard to the activist who wants a change in the establishment and soon. Among all the contradictions you see the irony when a doctor becomes the creator of death and when a judge is asked to bribe, or asked to go to court.

While presenting this set of more-or-less realistic characters, Ye Mera India (YMI) has in its milieu - education, unemployment, underworld, judiciary, the naxalite movement, impact of jihad training on little minds, the bane of being a good-looking woman, TV TRP's dominating art - a comment on both the industry and the taste of what the audience wants. A setting where a person might not have money but he sure does have a mobile. A city that ain't for the simpletons. A city which supposedly thrives on lack of civic sense - from spitting on public property to lane cutting to road rage. The travel of farm-owner to becoming a suspect for robbery and faces assassination of her character. And in its midst comparing communism to religion.

Sure, some of the attitudes on display might be exaggerated - both good and bad. And there's a phase where the sorry gets exasperatingly sorrier. And the usual transitions in characters that are just too good to be true. Then, there's the preacher-teacher going around showing everyone THE right path. While it works at times, it happens too often and unfortunately becomes unintentionally funny. Also the climax is a bit too difficult to digest and takes a lot away from the beauty of the film thus far.

And yet it succeeds in making a point. As the mirror is held to various characters, the part of the audience that behaves like the character, sees its image on screen. Also when the intended-to-be-disgusting disgusts, you know all departments have worked completely and in sync.

This is accompanies throughout with smart dialogues. And despite the extensive use of abusive language, it adds to the ambience rather and doesn't one look out-of-place. The narrator in the form of a voiceover recites insightful poetry. Though it might be a tad overdone in the first half.

None of this would have worked had it not been for the wonderful choice of cast. And that almost each one of them stood up to their task. And we are reminded that Rajpal Yadav can give a subtle performance if he's allowed to.

A pleasant surprise, a decent eye-opener to the subtler hypocrisy in society Yeh Mera India should certainly be on your "too watch" list. If not the theaters, at the very least when its out on DVD.

Thumbs up, by Khalid Mohamed, aslibaat.com : ...Surprisingly the quixotic Censor Board has permitted mc-bc kind of dialogue, which compels you to wonder why tamer words are bleeped out as a norm in other films.... full review

Thumbs up, by Taran Adarsh, IndiaFM : ...But what dilutes the impact is the way some of these stories are culminated in the concluding reels.... full review

Thumbs up, by Gohar Iqbal Punn, Radio Sargam : ...What make the film classy are the well-penned dialogues, direction and the performances... full review

Thumbs up, real bollywoood : ...What makes Y.M.I a winner are its terrific dialogues and Chandra’s handling of disturbing sequences with every single actor from the ensemble cast delivering an excellent performance.... full review

Thumbs up, by SpiceZee Bureau, Zee News : ...The best part of the film is that each story connects with you and talks about the values which we have forgotten, as Indians, and it’s time start incorporating them.... full review

Thumbs down, by Rajeev Masand, IBN Live : ...bites off way more than it can chew. ... full review

Thumbs down, Movie Talkies : ...But his good intentions come unstuck as he brandishes a gun over every possible issue that plagues our society today. ... full review

Thumbs down, by filmbear, Upper Stall : ...The American DOP struggles so hard to get a single shot in focus, it’s like he’s on drugs... full review

Want to Watch, by besseopro.ucoz.com

A bunch of some 20 characters are picked as a representative of the socio-economical-religious background they belong to. And we become a part of a day in their lives.

ossum movie. All indian should see this movie

after Wednesday this is the heart touching movie

After long time this the real movie. We need more that kind of movie.

our society need that kind of movie more. Even if 10% effect that will do

It is very interesting to know that this article have been posted here. It is very informative. It gives a detailed description of the said topic being discussed. There are people also active in the said discussion. I am grateful to be a part of this.