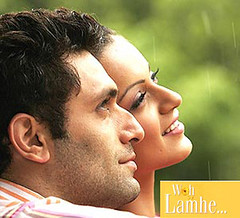 Rarely does one see the first two-three minutes of screen time establish the characters of the two lead actors so well. How I wish the rest of the movie was executed that skillfully too. For die-hard movie buffs just the first few minutes make it a must-watch in theatre. For the less-inclined, there are good moments, but there is no glitter-dance-colour-cinematography. Certainly wait for a somber mood to see this one. All songs other than the one in the second half have good music and beautiful poetry.

No one need tell the story – thanks to the marketing department that left no stone unturned in publicizing it as the Mahesh Bhatt-Parveen Babi love story. The story leaves a pretty big gap which makes you feel cheated. It feels like the first half is made with so much devotion and involvement that suddenly, the team wakes up…oops!!!…no time and money left to say it all, so let’s skip this part here.

Shiney Ahuja has given a laudable performance. You really feel for him right till the end. Kangna Ranaut’s dialogue delivery needs polishing, a lot of it! Also, either the dubbing is off, or she is trying to hide a lisp. The role required someone to shed clothes, and they found someone who had no inhibitions whatsoever, so what if even after make-up her face looks patchy.

Almost everything loses its way after half time. The reasonable dialogues are followed by inane ones. Really charged scenes give way to drab direction. The screenplay loses the slickness it had in the first half. Also, while some aspects of schizophrenia have been portrayed very well, others like side effects of medication, why a patient resists medication, etc are completely ignored.

This is one of those two-hours-and-a-few-minutes movies which makes you feel you have been sitting in that seat for more than three hours. If the audience is laughing out loud at serious scenes, you know they have been there too long.

Am I being insensitive by calling a supposedly sincere attempt to pay a tribute to Parveen Babi a marketing strategy? My thought while leaving the cinema hall – can anyone who was so deeply in love, make an exhibition out of it?

Thumbs up, by Nikhil Kumar, Apun Ka Choice : ...On the whole, ‘Woh Lamhe’ is a well-crafted, finely written, beautifully enacted movie that is definitely worth a watch.... full review

Thumbs up, by Prema K., Bollyvista.com : ...A highly emotional film, it should be lapped up by the older generation, especially Parveen Babi fans.... full review

Thumbs up, by Taran Adarsh, IndiaFM, indiainfo.com : ...Business at multiplexes should be bountiful.... full review

Thumbs up, by Subhash K. Jha, Sify Movies : ...Kangana keeps a tight control over overt articulations of expressions, so that when the outbursts happen they've a whiplash effect on the audience.... full review

Thumbs down, by Bhairavi Jhaveri, J.A.M : ...you can’t clearly distinguish between fact and fiction and that can leave the audience a bit irritated.... full review

Thumbs down, by Nikhat Kazmi, Times of India : ...The problem with Woh Lamhe lies in its relentless chest-beating and woe-mongering.... full review