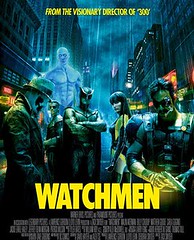 The long awaited adaptation of the famous graphic novel is a trifle disappointing.

The Watchmen has for long remained one of the most inaccessible of the graphic novels, inaccessible when it came to transposing it to the big screen. The novel is dense, multi textured, and works on at least three levels. It has a plot which is highly nuanced and extremely well detailed, its characters are a far cry from the standard “super hero” genre, and its themes remain extremely contemporary and disturbing.

The audience for this movie would clearly be divided into two, those who have read the novel and would want it to be replicated down to its tiniest detail, and those who have not and who would see the film as “normal” viewers. The former would be the legions and hordes of fans that have analysed and discussed the novel and its symbolisms, allusions, and connotations ad nauseam, while the latter would by and large have no clue about what they are to encounter.

I belong to the first group and therefore it is really difficult for me to write about the film as a “normal” viewer. Comparisons with the novel are unavoidable, but I have tried to restrict it to a minimum.

Let me then start with the screen play. The novel has enough material to make a mini series, but to fit into a big screen format it has been reduced to a running time of just less than three hours. The screenplay has been pared down to the essentials that help keep the plot moving and simultaneously introduce us to the “Watchmen”, a group of “superheroes”, by way of multiple back stories and flashbacks. A lot of detail and intricacies have been sacrificed for cinematic convenience. The director tries to make up for this by packing a lot of cues into every frame; cues that help the viewer understand that the universe of the Watchmen is not “real”, but an imagined alternate one. So there are news paper headlines, images on television that reference to real life incidents of the 70’s and 80’s, TV interviews, and the presence of at least five historical characters including Richard Nixon and Henry Kissinger.

The title sequence is ingenious, a series of sequential images in “slow still motion”, that depict the passing of time and concomitant changes. The entire title sequence is set to Bob Dylan’s 'The times they are a Changing', and it comes off very well. In fact certain iconic songs are used very well in the film, Simon and Garfunkel’s 'Sounds of Silence' beautifully underscores the mood of another sequence. What I really loved was the wailing, wrenching, Jimi Hendrix version of Bob Dylan’s apocalyptic 'All along the Watchtower', which sets the mood for the surreal climax.

The acting is top notch, the actors are “unknowns”, all barring Billy Crudup who plays Dr Manhattan, all naked, godlike, and blue to boot. Crudup’s acting is superb, his character seems detached from human concerns, but through his soft voice and facial movements, he creates a persona that comes across as vulnerable, powerful, but yet deeply human. Malin Akerman as Silk Spectre 2 is sometimes jarring, but she does well enough, as her role really does not demand too much. But the prize goes to Jackie Earl Haley who plays Rorschach. He dons a mask through out the film, we get to see his face only in the end and that too briefly, but through his hoarse rasping voice and the set of his shoulders, he conveys his uncompromising morality. He is aided by the fact that some of the most powerful dialogues (mostly as a voice over) belong to him.

Director Zach Snyder is good with CGI, going by his previous film 300. Here he does not overdo the special effects; the visual impact of Dr Manhattan’s character is very well done. The film makes an effort to replicate the panels of the graphic novel as far as possible and the visual composition is very well designed.

For a “superhero” movie, there are hardly any action scenes, just two to be precise, involving fisticuffs. They seem rather redundant and are downplayed; the movie could easily have done without them. The climax is rather disappointing and this is the movie’s fatal flaw. The climax just does not have enough punch, and it comes across as rather tame and inconsequential. This could possibly be due to two reasons; in the novel it is the atmosphere and the ambience created that matter more than the outcome, or it could be due to the fact that the elaborate plot deals with larger metaphysical concerns which do not translate too well cinematically, or well, both.

For those who have not read the novel, the film might be difficult to grasp (this is what some of my “normal viewer” friends have told me). But for those who have the courage, it might well be worth the effort to watch this film. The film is good, but definitely not great. One does get a feel of the “Watchmen” universe all right, hopefully a viewing might prompt some film goers to lay their hands on what for my money, is the best graphic novel till date.

A group of retired “super heroes” get together to find a killer, as one of their own is murdered.