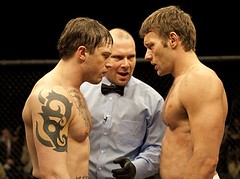 Warrior is not the kind of film that builds up an excitement about it from much before you watch the film. A film about the physical and emotional battles of two brothers, the poster and trailer look intense and heavy. Admittedly, there were moments in the film which didn’t fit. But the overall effect of Warrior leaves you with a contemplative after-taste.

When a movie, with a genre you don’t particularly care about, gets you passionately involved in a discussion about the outcome and characters – you know it’s a movie worth its money. Warrior does that to you, engaging you in a fighter film about two estranged brothers, ex-Army officer Tommy (Tom Hardy) and School teacher Brendon (Joel Edgerton).

Both enter an MMA (mixed martial arts) tournament with a 5 million cash prize for different reasons. It’s a battle within a war – and it transcends to an emotional flight of two brothers. Tommy’s battling with his own demons, and the tournament for him becomes an escape. Brendon, on the other hand needs the money to prevent his home from being held by the bank.

The family’s a broken one – ex-Alcoholic father (Nick Nolte) who lives alone and two brothers who have gone their separate ways. Through the film, you can sense the complexity of each relationship. The brothers broke apart when the parents got divorced – and imaginary boundaries were formed. The father's drinking past has led him to isolation from the sons. Yet Tommy returns to be trained by his father for the tournament – and somewhere then, you know there is scope (and are hoping) for reconciliation.

Does it incorporate clichés? Yes, you can expect drama and a few tears, alongside some heavy-duty MMA action. It’s the kind of sport I routinely stay away from when on TV – mostly because I never understood how someone could make a sport out of beating each other up so brutally.

However with Warrior you learn to move past the fundamentals. You feel the blood and bones of the fights and you know the outcome, but that’s acceptable because it takes you with it on the journey. The treatment is a tad bit clichéd – because you know who’s going to win the fights, you know how, and while the tension is being built up between the father and the brothers, you know where you’re headed.

The film works mainly because of the superb performances; clear winner remains Nick Nolte. A vulnerable yet tough ex-alcoholic and fighter, he deals with the strange turn of events in a realistically painful way. Tom Hardy is in his element, as an aggressive, emotionally burdened character – results of which show in his fighting. Joel Edgerton is heart-warming; you can feel his pain.

By the climax of the film, you start to feel that the weight of the script lapses, but director Gavin O’Connor manages to divert your attention to the intense fights. The overpowering feeling of redemption hovers around the movie, and before you know, you get powerfully involved with Warrior. I’m quoting a friend here, who shared my exact sentiments of the film, “I think there’s still some scope for Hollywood”.

Yay! Thumbs Up, by manoj Kumar