A Walk Among the Tombstones

Despite its sober pace, A Walk Among the Tombstones is that rare film which manages to transport you into the world it is set in. Written for the screen and directed by Scott Frank, the film also has the added benefit of having Liam Neeson play a character you don’t expect so much from him.

Though far from perfect, writer-director Scott Frank’s A Walk Among the Tombstones, adapted from a Lawrence Block novel of the same name, comes across as a refreshing change. Perhaps it was the sight of Liam Neeson in the publicity material that caused one to fear that the film would once again have Neeson play what he’s been doing so frequently in the recent past. Thankfully enough, his character as well as the film itself are treated with rare patience.

Set in the year 1999 (the period building up to the greatest of anti-climaxes, that Y2K non-event), Neeson plays Matt Scudder, a recovering alcoholic and retired (for a reason) NYPD cop who now takes up cases as a private investigator, even if he is an unlicensed one.

A Walk Among the Tombstones has an intriguing air about it, all the way through. Aided greatly by Mihai Malaimare Jr. 's cinematography, but propelled mostly by Scott Frank’s mature, stoic handling of the film, it is the atmosphere of the film that is its biggest strength. Reminiscent often of Denis Villeneuve’s Prisoners (though not nearly as haunting), the film unfolds at its own gentle pace. 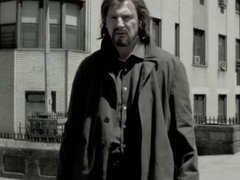 Apart from the mature treatment, the film also gives us a more real hero than we’ve come to expect from any Hollywood film lately, let alone one that has Liam Neeson in the lead. It is great to see him not effortlessly mowing down multiple baddies at one go, actually get beaten up a little bit himself, but still show the spirit to carry on. In one of the best scenes of the film, a man draws a knife on Scudder; the way the scene eventually plays out will surprise you, and it will underline why sometimes it makes so much sense to infuse realism into cinema.

The film also gives us a pair of unlikely bad guys. David Harbour, who plays one of them, is terrific in particular. There is something chilling about the remorseless way in which they do what they do, though their background and motivations aren’t sufficiently explained. My other grouse with the film was the fact that the slow pace and spine-tingling ambiance all seemed to be building up to something that would grab at your gut, but that doesn’t quite happen. The film still will have your stomach in a knot for the most, but amping up the shock value somewhere would perhaps have served the film well.

Then again, you realize that that never seemed to be the director’s intention in the first place. There’s a message or two in the film (through the character of Scudder himself, as well as his interactions with a homeless boy named T.J.); there’s a vacant, sepulchral feel that draws you in; and there’s a nice turn by a terrific actor playing a character truly worth rooting for. That was what Scott Frank always seemed to hold as his trump cards, and they’re what deliver a decent film - one that demands patience, yes, but which ultimately rewards you with that feeling of having inhabited a world outside of your own.

Want to Watch, by Anoop

A Walk Among the Tombstones - Cast, crew, links

Very well presented. It has instilled a desire to watch the movie. Will come back after doing so!!!

Anoop has given this movie a Want to Watch. Anoop has posted 11 comments and has rated 2 movies. See Anoop's page for more details.