An uninspiring portrayal of patriotism.

What is that one thing all historic,Indian patriotic films have in common? Oh yes, you guessed it right. Freedom fighters holding firelights in their hands and belting some heavily-worded, inspiring songs. I always wonder why the British captured freedom fighters while they were in hiding and never while they were singing openly. But that is how things are portrayed in our films. Being a patriotic tale, I was expecting all this mindless drama in Vitti Dandu. The film didn’t surprise me, barring its basic storyline.

Revolved around vitti dandu – a rural game, the film is a fictional incident that took place just six days before the nation got independence. But at its core lies a heartwarming relationship between a grandfather (Dilip Prabhavalkar) and his grandson, who is now narrating that story to his own grandson. As he takes a stroll down memory lane, the tone of his voiceover changes abruptly. His narrative shows you other characters recounting their own memories; as if being a firsthand witness to every happening. This whole affair makes you wonder if the character is genuinely reciting the tale or director Ganesh Kadam is forcibly showing it.

Vitti Dandu is an absolutely refreshing story on paper. But it turns out to be an exaggerated one on screen. A conventionally-written screenplay and over-the-top direction fail to match the sincerity of the story. Kadam rather tries to depict it in the same fashion as many other films of its genre, eventually affecting performances of some brilliant actors. Except a few sequences, Prabhavalkar performs at his usual best. Rest of the cast is passable. They seem to be driven by their characters, but end up doing unnatural theatrics. 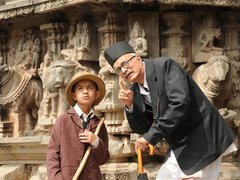 The film’s cinematography sorely misses the point. A simple treatment could’ve helped set the tone of 1947. Production design, too, fails to distinctively create that era. Editing doesn’t help the film either, making an already lackluster narrative even more vulnerable. Contemporary sounds effects and lip-syncing songs are totally out-of-place. Instead of intensifying your experience, they just add to the boredom.

Indian films are no match to Hollywood in visual effects (doesn’t mean we’re superior in other departments). They are, in fact, wonderful examples of disastrous VFX. This is despite the fact that major Hollywood productions are outsourced to Indian VFX studios. Considering its budget; I don’t want to delve into Vitti Dandu’s visual effects quality, but the choice of it. The director’s preference to obviously fake appearances for the jeep-driving sequence is definitely startling.

The climax sequence is one of my favorite terrible moments in the film. It somehow reminds me of those mindless, south Indian action potboilers. I literally couldn’t stop myself from laughing. This is something unique that makes Vitti Dandu outshine other Indian patriotic films. An achievement in itself, isn’t it?

Vitti Dandu is a story of patriotism. It also brings forth the relationship between a grandfather and his grandson, who is now narrating that story to his own grandson.