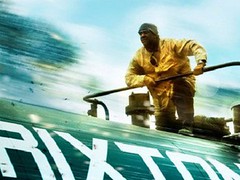 Its a simple story line. We know the stakes in the first ten minutes of the movie. We know who are the heroes who are going to pull it off. But the movie has its fair share of unpredictability and complications to keep you engaged and make this a thrill ride. Watch it for sure.

Before I saw this movie, a fellow reviewer at wogma and a friend, said to me – “This looks like 'The Burning Train' all over again.” I had similar notions about the film and was not too excited about watching it. The promos gave away all the story there is – an unmanned train carrying highly toxic inflammable chemicals for cargo is heading at a very high speed towards a densely populated area and someone has to stop it before it causes mass destruction. But as you watch the movie, whenever you begin to think it's all predictable and boring, the movie throws in some masterfully shot action sequences, or some complications that lead to change of plans. The movie excels in both these departments and the action sequences are good enough to give you a rush. The complications make you think of ways to overcome them.

Most people in the theatre, were talking to each other while watching the movie, and for once, it didn't annoy me. For on more than one occasions, I did the same with my friends. We discussed strategies, “Why don't they do this instead?” or “They should try that!” I believe a movie has done its job well, when it gets the audience so engaged. More so, when in the movie, they eventually discuss and try out half the ideas that we were floating around in the theatre. It made the story believable (it is inspired by a true story after all) and made us feel involved. Admittedly, there are some loopholes and heroics that are not seen in real life. But hey, whats an action movie, without some heroics, right?

The ending might not satisfy everyone and may make you feel a bit cheated. There has been a lot of chatter in discussion forums over the net, about the choice of actions they took in the movie, and how they could have been more effective. But if you keep an open mind that all actions to prevent a disaster have to be taken with the approval of bureaucratic people who try to play safe in such situations and the time crunch does not always bring out the best in people, you'll thoroughly enjoy this movie.

Denzel Washington is good as ever in the role of veteran engineer who is close to retirement. Chris Pine does well in his role of a newly assigned conductor who is working out his family issues. How tragedy makes them friends, is again no rocket science, but executed well. The direction is flawless and is the life and soul of the movie. The train sequences have been shot so masterfully that it gives you plenty of edge-of-the-seat, breathtaking moments. The screenplay gets a bit off the course at times, but since they had little story to play around with; you don't feel it sticking out as a sore thumb. Dialogues are clichéd, straight from the old-school action films, but the action more than makes up for it. The background score is fantastic and gives a lot of depth to the action sequences.

After the first fifteen minutes or so, the movie never hits a low. It's a thrill ride, with no unnecessary stunts or over-the-top action sequences, which makes it one of the best thriller movies in recent times. The lighter moments which make fun of bureaucracy are fun to watch too. Watch this for sure, preferably in theatre.

An unmanned train carrying highly toxic inflammable chemicals for cargo, is set loose towards densely populated area of Stanton. It is predicted to cause mass destruction of property and take thousands of lives on collision. When all efforts to stop it seem to fail, a veteran engineer and his newly recruited conductor take matters in their own hands and set out to stop it. It is a movie about how they do just that.