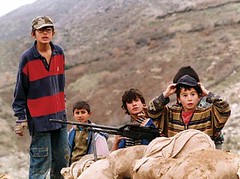 Picture a smile creeping up your face; but you find yourself stopping it because what you want to smile about is a very serious matter. Mostly because you don’t even know what is making you smile. Immediately after that, you find yourself with a lumpy throat and wide, horrified eyes – viewing something that makes your gut wrench.

This is an experience Bahman Ghobadi’s

The film revolves around three main characters – Satellite (Sohran Ebrahim) the youngest authoritarian in the village - a boy who is most resourceful. He controls all the children who diffuses landmines with their bare hands and exchange them for machine guns in the local market.

On the other hand, there’s brother-sister Agrin and Hyenkov, the calmest yet most affected children of the lot. Hyenkov has no hands; he uses his lips to diffuse the mines. Agrin is quiet throughout the film, but in her eyes you can virtually see the entire war. It’s a helpless, weak and desolate perspective which reminds you every minute how lucky you are to be only watching the film.

More than loss of innocence,

Keeping the emotional overtone in the film aside,

Primary reason to pick up a

The realities slap you in the face with every passing second but it also has a surreal after-ring to it.

This feeling is best expressed with one hard-hitting yet surreal scene- a baby tries to make a turtle drown in a small pond, and through the baby’s perspective you get an underwater shot of the turtle wading, almost flying around like there’s no worry in the world. You may just hear laughter at some point in the film – maybe of a child or maybe even your own – but it’s a laughter wrapped with a palpable sense of danger. Watch the film if you can watch turtles fly in spite of broken limbs.