Philosophizes a little too much with little insight. And I wonder where we have seen the story earlier? Hmmmm...

Every other line that Shekhar (Aditya Seal) says has the word “life” in it. That is how much he philosophizes. Okay fine, I might be exaggerating a tad bit. But what could have been insightful, instead incites eyerolls.

the film is all about romance and remorse – intense emotions neither of which unfortunately touch a chord.

You have to give it to Tum Bin 2 for having two equally decent human beings as contenders for the lady in the love triangle. Else, it would have been very easy for the audience to have someone to root for. Unfortunately, this opportunity to engage is lost by a dull implementation of the concept.

That aside, the most chemistry you see is that between two mourning people - a would be daughter-in-law and father-in-law. And this is supposed to be a romantic film. This is interesting considering that the characters are saying all the right things when they talk about romance. So in that sense some of the dialogue is good. But, it doesn't leave an impact.

It is not like the performances are awful. Sure, they aren't the greatest but they aren't the kind that you usually get in films with this budget and this style of execution. Aditya Seal and Neha Sharma actually emote aptly. While the same cannot be said about Aashim Gulati, the rest of the supporting cast do well to keep things real.

Given that the various departments of film are just about average but not below average, the culprit in pulling it down might as well be the pace. With a song at every turn, even if it is running in the background and not lip-synced, the film is quite slow. 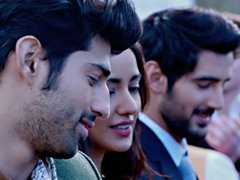 And of course, to make matters worse it is predictable. In fact, so much so that I placed a bet with myself – I will up the rating a notch if the interval point doesn't come where I think it will. This was 20 minutes into the film about an hour away from interval. I won. And just in case you are wondering, no I didn't have to change the rating.

Of course, we shouldn't be waiting for the unexpected when the makers seem to have understood the word “sequel” as same-ish story with a different setting rather than “what comes next”. For an almost repeat show, the film is all about romance and remorse – intense emotions neither of which unfortunately touch a chord.

Thumbs up, Bollywood Hungama : ...The film's cinematography (Ewan Mulligan) is top-notch. The way in which he has presented the film and shot the locations are extremely top-notch and exemplary. On the other hand, the film’s editing (Farooq Hundekar) could have been tighter. ... full review

Thumbs up, by Renuka Vyavahare, Times of India : ...Despite the odds, if you like old-fashioned love stories with great music, Tum Bin 2 is a partially heartrending tale that can be watched for its beautiful message and sincere execution. ... full review

So-So, by Subhash K Jha, Bolly Spice : ...This one has more than its fair share of flaws. But it isn’t unwatchable. The film’s high aesthetic qualities make sure of that. ... full review

So-So, by Bryan Durham, DNA : ...What to do: The first half kinda builds you up while the meandering second half brings you down with its inordinate length. Closure comes a little too late. A shorter runtime and fewer songs might have made this a better experience. But still not as good as the first film.... full review

So-So, by Rachit Gupta, Filmfare : ...Tum Bin 2 is Anubhav Sinha’s rehash of his first film for the new audience. Millennials who’ve grown up with romances like The Notebook or the current crop of tweens and teens who enjoy movies like The Fault In Our Stars or Aashiqui 2 will have lots of meat in this light but breezy romantic saga. ... full review

So-So, by Johnson Thomas, Free Press Journal : ...The songs are hummable at least, the cinematography is a lure but the melodramatic treatment and the overwhelming background score makes the experience quite a tedious one. Performances go over-the-top to stage-manage affect. ... full review

So-So, by Vishal Verma, Glamsham.com : ...Seasoned performer Kanwaljit Singh is fantastic. Sandali Sinha - the lead actress from the original appears for a one scene cameo and looks good. ... full review

So-So, by Sweta Kaushal, Hindustan Times : ...The lead actors are not convincing -- neither in dialogue delivery nor in emoting. Kanwaljeet Singh (who plays a sweet and loving dad) and Meher Vij are the only ones who really get their characters right and warm up your heart with their performances. ... full review

So-So, by Kunal Guha, Mumbai Mirror : ...If you're going through a rough patch in your relationship, opt for this one. It will convince you that you're better off by yourself. ... full review

So-So, by Saibal Chatterjee, NDTV : ...The audience might not be overly dukhi with Tum Bin 2, especially owing to its commendably sophisticated soundtrack. But this sequel is unlikely to have anybody asking for more. ... full review

Thumbs down, by Rajat Tripathi, Bollywood Life : ...Tum Bin is a shiny bright red balloon that is floating upwards towards a pointed needle... full review

Thumbs down, by UDITA JHUNJHUNWALA', FirstPost : ...Unlike the musical success of its predecessor, Ankit Tiwari and Nikhil-Vinay’s soundtrack does not deliver any memorable songs. What you do notice are the swells in the background music to heighten the emotional peaks, and if that doesn’t move you, perhaps the copious tears shed by Neha Sharma will.... full review

Thumbs down, by Anupama Chopra, Hindustan Times : ...Neha Sharma, who plays the woman inciting this furious devotion, retains a single expression of anguish on her face. Aashim Gulati is even more stilted. The only spark comes from Aditya Seal, who looks appropriately conflicted. ... full review

Thumbs down, by Suhani Singh, india today : ...Arriving 15 years after the first one, Tum Bin 2 is stale, all-too-familiar, superfluous sequel that never strikes the one place it really should - the heart.... full review

Thumbs down, by Surabhi Redkar, koimoi : ...Like the film’s dialoge ‘pyaar bewaja hota hai’, this film is also equally ‘bewajah’. Spare yourself from this romantic drama! A 1.5/5 for the film. ... full review

Thumbs down, by Mohar Basu , MiD DAY : ...In between buckets of melodrama and copious tears, the film drags on falling back on the trappings of the original. Penance and guilt are studied closely all over again. Sinha will want you to believe that relationships are made of marriages and the years you put in them. Could he sell it well? Hardly! ... full review

Thumbs down, by Jaidev Hemmady, Movie Talkies : ...In other words, Tum Bin 2 is not worth the time and effort… ... full review

Thumbs down, by Sameeksha Dandriyal, News18.com : ...Overall the film thrives on its emotional quotient and the picturesque locales in Scotland. Since it has nothing new to offer, it comes across as just another mediocre film. Go for it if you are love typical Bollywood romance and cheesy love lessons, otherwise, catch its television premiere on a good lazy afternoon. ... full review

Thumbs down, by Manisha Lakhe, Now Running.com : ...The moment Boy1 comes back from the dead, the movie just turns into a farce. There is no tragedy like Sangam (Raj Kapoor, Rajendra Kumar and Vyjayantimala) no soul like Saajan (where Salman Khan and Sanjay Dutt both love Madhuri Dixit). This movie is plain comical. Each boy jealous of the other and the girl staring at both open mouthed. You begin hoping the movie would have the two lads flying away into the sunset leaving the silly Girl alone. ... full review

Thumbs down, by Sukanya Verma, Rediff : ...Tum Bin II's out-dated twists, needless complications and comical confusion over the sacrificial lamb prolongs the rona dhona by a good half an hour and still cannot settle who loves whom or if at all. ... full review

Thumbs down, by Namrata Joshi, The Hindu : ...Taranjeet’s two Kaur sisters had potential to be quite a riot, but they get hemmed in. The pick of the picture is Kanwaljit Singh, ever so dignified as the gentle patriarch. And then there are Jagjit Singh and Rekha Bhardwaj singing ‘Teri Fariyaad’. But then you are much better off listening to the two on your own music system than on the big screen. ... full review

Thumbs down, Zee News : ...Overall, "Tum Bin 2" had the potential of being a love story that could warm the cockles of your heart, but somehow this one does not, despite the strong performances by Aditya Seal and Neha Sharma. ... full review

AnmolAlam: You know when you crack jokes about a movie but actually you're crying from the inside bc it's deep. Yeah that's me during tum bin 2

gurujeet212: Tum Bin 2 Movie Review: While the first half engages you emotionally, a tedious second half loses steam. 3/5 Star https://t.co/UezcxqxtzR

Claptistani: Tum bin 2 was beyond shit

AnamikaS: Rock On 2... Tum Bin 2... Force 2... These sequels are nothing but sheer torture! Don't Waste your time and money on these films! #Bollywood

Thanks, you just saved my BookMyShow coupon. I'll now rather use it for Dear Zindagi. Love from Dibakar...