A cute comment on everyday, urban life. Becomes a little 'out there', every once in a while. But so does everyday life, right? While the philosophising is a tad lame, the romantic bits are adorable.

Tu Hai Mera Sunday strings together many observations from every day life. In fact, you are taking a peek into just a few weeks of the lives of five men. This is done in a breezy manner. However, every once in a while it breaks into intense drama and/or philosophy. This break in the light breeze holds the film back.

A two hour version of “What is this life if full of care, we have not time to stand and stare”

The film thankfully doesn't spend too much time on the history of the five lives, but we come to know these men reasonably well by the way they talk to each other and others around them. They are kept together by their weekly game of football. Their lives, individually held together by their Sunday football time.

The writing has a lightness about it that hooks you in, even if you are not completely involved with the characters. Not only does it have organic, daily life humor even the flow of the stories is smooth. Through the film, you can see the comment on lack of space in urban life – physically and mentally. This philosophy of not “standing and caring” keeps a low profile and suddenly has an outburst and you can see through the cracks.

You decipher the structure. The major religions/communities are represented through the characters. It is by design. At least two characters stay in areas that are dominantly populated by people from their community. One is a nice guy, one is a nice guy with a bad boy image, one is a nice guy but has angst filled within, one is a nice guy who wants to rebel, one is unhappily married. One has issues with his parents, one with his kids. One has trouble at work, one is comfortable in his skin. By the end, all but one of their stories are resolved nicely, without much ado.

While this sounds formulaic and is too, to a large extent, there are charming subtleties. For instance one isn't aspirational – that's a rare trait for one of the main heroes of a story. Then, Tu Hai Mera Sunday does so well with its romantic scenes – maybe because they wouldn't necessarily qualify as romantic in the typical sense of the word. You sense the romance because the chemistry is obvious, not only to us as an audience, but to the two parties too. And we know they know and are trying to play it out so that it works out for them. These were my favourite bits in the film. 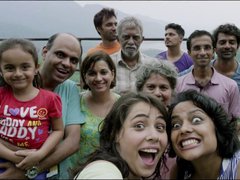 A lot of Tu Hai Mera Sunday's charm lies in the hands of its performers. And they don't let the film down. So grounded are each of the performances, that as an afterthought I wondered if the characters were written so that the actors could be just themselves.

If it were not for the overt philosophisation and dramatisation, Tu Hai Mera Sunday would have worked much better. But, the characters are a combination of what defines them as humans and what they would like to be. Which is why the dramatisation seems bizarre. In real life, we don't really become we really want to be in one sudden stroke, right?

While this sounds formulaic and is too, to a large extent, there are charming subtleties.

Also, such films feel like they come from a very personal space. A space that is so close to the writer/director's heart that the audience is kept at a distance, like a witness. As if they want to say, “what do you know about me or my life?” In that sense, it precludes judgment. This is not specific to Tu Hai Mera Sunday, but more about films with relatively smaller budgets, slice-of-life themes that are philosophical takes on life.

Thumbs up, by Subhash K Jha, Bolly Spice : ...This is a film whose characters I carried with me long after the film was over. Every actor, including the unknown Rama Joshi who plays Vishal Malhotra’s harried mother, and Meher Acharia-Dar who plays Arjun’s sprightly temperamental sister, is an unsung hero in this gem of a film that must be seen. ... full review

Thumbs up, by Ankita Chaurasia , Bollywood Life : ...Tu Hai Mera Sunday is one of those films that will make for a pleasant watch over the weekend, making you ponder over the futility of the rat race and might make you consider pursuing the deeper aspects of your existence. And it will entertain you. You should definitely go for this one. ... full review

Thumbs up, by UDITA JHUNJHUNWALA, FirstPost : ...Tu Hai Mera Sunday is a sweet ode to Mumbai that stokes our love for the city, chinks and all. ... full review

Thumbs up, by Vishal Verma, Glamsham.com : ...All said and done, TU HAI MERA SUNDAY is a moment of charming and intimating relish of life that demands a 'space' from those who care for cinema that celebrates life and the possibility in the positivity it offers. Go make your day today with this Sunday. ... full review

Thumbs up, by Umesh Punwani, koimoi : ...We usually take one hour to file the review but I took two for this one because Tu Hai Mera Sunday is special. Don’t expect your mainstream Bollywood film from this one. This is one simple film trying to tackle few simple things which are usually overly thought by many. ... full review

Thumbs up, by Raja Sen, NDTV : ...The cast is rather fabulous. Barun Sobti, a wavy-haired hero-type with an easy charm, plays Arjun with a great sheepishness, especially when it's hinted that he may be a virgin. Shahana Goswami plays Kavi, the no-nonsense girl he likes (who would like a bit of nonsense after all, thank you very much), and her performance is effortless. The two are lovely together, enough to forgive the film the indulgence of escalating their relationship too fast at the end. Shiv Subramanyam is wonderful as the old man who, as he gets comfortable, regains enough coherence to start using English words, and one of the film's most tender performances comes from Rama Joshi as the harried Catholic mother torn between the children she doesn't want to see grow up. Maanvi Gagroo is quite terrific as a bouncy girl who wants everyone to be in on the fun, Rasika Duggal uses her infectious smile to great effect, while Jay Upadhyay's Jayesh Bhai and Nakul Bhalla's Mehernosh really tie the film together. ... full review

Thumbs up, by Saibal Chatterjee, NDTV : ...Tu Hai Mera Sunday abounds in characters that we can relate to instantly. But it is this spirited woman - she is defined by her ability to smile her way through adversity - who stands out and leaves us wishing that there was more of her in this lovely little film about real people confronting real problems. But there isn't much else that the film lacks. It sets itself a modest target and achieves it without breaking a sweat. Don't wait for Sunday, watch Tu Hai Mera Sunday right away and spread the word. ... full review

Thumbs up, by Namrata Joshi, The Hindu : ...The likeable cast lends an added dose of freshness and plays off well against each other. A film about people you would know but will still not get tired of seeing again and again.... full review

Thumbs up, by Pallabi Dey Purkayastha, Times of India : ...For anyone who feels burdened and bogged down by life, this light-hearted tale of uncertainty and survival is a definite watch. Like they say, laugh it out! ... full review

So-So, by Harshada Rege, DNA : ...Watch it to see some ordinary stories come alive on the big screen. ... full review

So-So, by Rachit Gupta, Filmfare : ...This film briefly makes you think about life in the big city. It has noble intentions and its character quirks are designed to both entertain and understand the story. But the good writing doesn’t always translate into the screenplay. Tu Hai Mera Sunday is a decent watch. It’s definitely a better story than its trite title. A feel-good film especially for younger citizens of India’s big booming cities.... full review

So-So, by Johnson Thomas, Free Press Journal : ...Dhaimade doesn’t dig deep, he prefers to keep the narrative frothy and entertaining, therefor ends up making it all enjoyable but not exactly memorable. So, while there’s latest promise in this slice-of-life dramedy, not enough was being done to showcase it. And that’s a pity. Nevertheless, this one is cute and entertaining!... full review

So-So, by Rohit Vats, Hindustan Times : ...Tu Hai Mera Sunday is concerned about our well beings and that makes it notice-worthy. It’s a sweet, little film asking for your support.... full review

So-So, by Mohar Basu , MiD DAY : ...Even as the narrative is bogged down by clichés of an aarti-chanting Gujju family or an iniquitous senior colleague targeting a damsel in distress, it benefits heavily from the delightful equation Barun and Shahana weave. Their relationship covers an entire gamut of emotions – from strangers to friends taking aimless strolls and falling in love. The last scene of the two will sell itself to those with a taste for mush. ... full review

So-So, by Kunal Guha, Mumbai Mirror : ...Director Milind Dhaimade balances the parallel stories in the film evenly and with an underlying vulnerability. He allows his characters to demonstrate their traits and only occasionally, becomes a little too preachy. ... full review

So-So, by Rajeev Masand, News18.com : ...Occasionally the narrative sputters like an old car on account of stray, boring scenes, or when multiple songs eat into the narrative. Yet the performances are charming, and also the romantic moments between the men and their respective partners. Especially Sobti and Goswami who’re self-assured and bring a conversational feel to their lines. Rasika Dugal, meanwhile, delivers a terrific cameo as a captivating neighbor. ... full review

So-So, by Manisha Lakhe, Now Running.com : ...The film has been through the festival circuit and yet, it does not feel aged. There are some glitches, and the title of the film is weird, but you forgive them simply because you want this life with friends. All in all, this movie is a delightful watch. ... full review

So-So, by Sreehari Nair, Rediff : ...This is a film in which the snapshots work, but the collective voice simply fades out. ... full review