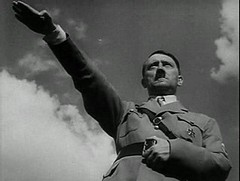 Triumph Of the Will

Triumph Of The Will is one of the best propaganda films made in cinematic history. Directed by Adolf Hitler’s favourite film-maker, Leni Riefenstahl, it captures the grand welcome Germany offers Hitler during his review visit to Nuremberg for the Nazi Party Congress. Some outstanding speeches by the dictator are shot with an accomplished camera lens. If you’d want to imitate the Fuhrer’s mannerisms and accent any day, this is the film you’ve gotta watch, on loop.

The first effect that Triumph Of The Will produced on me, was to make me temporarily forget Adolf Hitler’s crimes, by simply bowling me over with his oratory skills through the speeches that this documentary is full of. Indeed, there is no other speaker the world has seen, who can not crack you up in that silly moustache, and yet mobilize an entire nation to act as per his command.

The second effect: An immense admiration for the film’s female director, Leni Riefenstahl (pronounced Ree-fen-staal) who was commissioned by Hitler himself to make this film.

Triumph Of The Will documents Hitler’s visit to Nuremberg to attend the Nazi Party Congress, and the manner in which Riefenstahl has captured the grandeur of that visit, is very wow-worthy. Not just in scale, but also in her employment of camera technique and aesthetics - stuff which perhaps only a woman’s eye can uniquely observe. I say this, because she succeeds in making Hitler not only handsome, but someone who looks to be in charge of his people.

Right from the introductory scenes where Hitler’s aircraft floats through the clouds, to its shadow passing over the streets of Nuremberg like a blessing, to his descent and eventual appearance in front of his supporters - it feels as if God himself emerged from the doors of the plane. Riefenstahl does well to hold your attention right upfront. Just when you think that this may turn out to be yet another film filled with grainy, fast-forward worthy footage from history, you’re surprised to see how well-preserved the material still is (a big pat on the back of Enlighten Film Society for making this available in India).

Riefenstahl’s crew shot the four-day Congress and in the process, collected over 60 hours of footage. The 109 minutes that you finally see in this film are a mix of Hitler’s speeches made on each day, the Republic Day-kinda parade presented for him displaying the might of the German artillery and Youth Army. There are some rare moments too: you spot Hitler smile once in a while and also witness him getting humbled by the support.

His speeches are undoubtedly fiery and the manner in which they’ve been shot, is nothing short of an Obama address. He is often erected on a podium high up in the air, and resulting effect seems to resemble a religious address from the Pope. Hitler however, speaks without any reference material in front of him. He talks right from the heart and with so much passion, you fear his moustache might explode into bits, or his teeth might crunch to pieces. His comments are highly provocative, prejudiced, but his sense of patriotism is unique, almost equating it as a religion of sorts.

Throughout the film, the camera does a fine job of capturing people’s reactions, through tight close-ups - be it of the Youth Army poised in attention, or the little kids playing the drums for the band like there was no tomorrow. A chill ran down my spine thinking that all those kids and young men would be dead by now.

This film is an accomplishment in cinematic technique, for managing to pull off a grand event of this nature - that too by a woman film-maker in what was then, a man’s world. The agile camera movements, the tight tracking frames of Hitler, the obsession with finding textures in the sea of army men walking in discipline, the low-angle shots providing Hitler a Godly halo - all of them tie in well together and give enough justification as to why this is one of the greatest propaganda films of all time.

Leni Reifenstahl, an actress herself, made this film on Hitler’s request. Although skeptical at the beginning, since she didn’t understand the importance of Hitler’s visit and the visit’s political implications, she agreed only when the Fuhrer, a self-confessed admirer of her work, convinced her that he wanted an artistic viewpoint in shooting the proceedings. In hindsight, it seems like a great decision, but it proved detrimental for the advancement of Riefenstahl’s career. She came to known as a Nazi pin-up girl and despite she breaking new ground in filming technique with every film, critics always ended up pointing out fascist tendencies in her work.

Which is why, Triumph Of The Will is a significant film in the course of cinematic history. It covers up Hitler’s crimes so well, sealing once and for all, the ritual of German worship of their great dictator. But it also dug a coffin for its extremely talented film-maker, who is today credited for inventing and enhancing innovations like underwater photography.

Parts of the film are certain to bore you - like the never-ending parades and the on-going orchestra, which forms the background score. But watching Hitler at the microphone is a weird experience - its a mix of amusement, admiration and hatred. That’s a feeling few men in the world can generate.

Yay! Thumbs Up, by Aly

So-So, by Jeff : It helped me with my project so thanks :)

Triumph Of the Will - Cast, crew, links

It is worth noting that it is still considered a very dangerous movie. Few germans have ever been allowed to see it. For good reason.
If you show it to young people you have to give them a very serious talking to first.