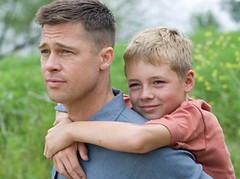 The Tree of Life

Tree of Lifeis an indulgent film – if you share the same vision as the director, you’ll have entered a life-altering zone with the film where the beauty and grandeur of life will shake you and overpower you. But the film also has the capacity to alienate you with its overtly religious undertones and slow pace.

Terence Malick’s Palme D’or winner Tree of Lifedemarcates its audience into two – the kind that has the patience to watch a tree grow over the years and the kind that will keep coming back every 10 years to quickly monitor its progress. But both kinds acknowledge the magnificence of the tree.

Tree of Life is a film that unfolds slowly. In all its passion, whispers, colors and surrealist imagery it tries to tell you the story of a family, and how they grapple with life and death. But it’s not a grim existential crisis, the movie talks about nature and about grace (personified by the father and mother, played by Brad Pitt and Jessica Chastain.)

The imagery is all-encompassing poetry. We pass through the life of a family living in an American suburb in the 50s, through the eyes of the younger son, Jack (Sean Penn), who struggles to find answers for his brother’s death, his mother’s soft charm, his father’s disciplinarian demeanor and how that all cumulates into life.

We bustle through old-school visuals with watercolors, smokes, liquids, paints and dyes – all of which take us through a symbolic, colorful and magnanimous process of how life originated. It’s a montage of waterfalls, and erupting lava, amoebae forming, reproduction of every species and every aspect of nature scanned beautifully. The most refreshing twenty minutes in the film, mostly because the visuals are old-school and thankfully we aren’t subjected to high-end visual effects and graphics.

We keep sifting through patient and extravagant shots of nature, of life in general and intercutting visuals of the O’Briens' lives. It’s a film about life, and it’s a preachy film but each shot manages to take your breath away. Coupled with the gospel like background score and divine cinematography, the audio-visual experience is almost sublime.

However, the narrative structure is leisurely and repetitive; you feel like a slither of a water color, trickling down as slowly as possible, never stopping but moving sporadically. You’ll notice the religious undertones of redemption and forgiveness, you’ll see life through a supreme being’s eyes, but you’ll also zone out amidst all the lovely visuals because the film is basically like an extremely poetic sermon. Some words stun you, some inspire, but some just bore you.

If you’re looking for a glimmer of intimacy, inspiration and just to be awed by the naturalness of life, Tree of Life gives you that. The film will motivate you to cleanse your soul, introspect, restructure your life around the beauty that this world is and all that.You’ll just need lots of patience to move with the film.

Yay! Thumbs Up, by leto5 : motivating