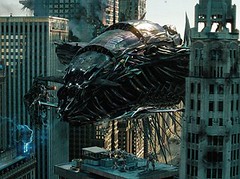 Transformers Dark of the Moon

More of the same ol' kaam-tum-dhasshum-kaching-boom-kaboom-screeeech-repeat. The concept is as cool as it was in the first film, but then I might as well just have watched the first one, right? Nope, neither the 3-D nor the rambling story add value.

I love action films and I love the idea of machines transforming into other machines. Seriously, it's damn neat. It's not only the idea but also the slick way they've been transforming since Transformers (the first in the series). I like how the machines move and the sounds they make while they are at it. As sarcastic as it may sound (given the rating), I mean it. But more of the same? For all of two and a half hours? Naah. Don't make me hate something I love, by overdoing it.

Actually, I had already had enough with Transformers: Revenge of the Fallen . The monotony of the action sequence in the climax made me nod off for a good twenty minutes. I'm not proud of it, especially since I was accompanying a Transformer-enthusiast. Oh no, I didn't sleep during this one, I was going to review it, so I couldn't sleep. So, that's no credit to the film.

For the non-action minutes in the film, which might be all of 20, there are a few good comic lines and a lot of mumbo-jumbo about freedom. There are good aliens vs. evil aliens. And how they cross and double-cross each other and humans. Which also means, the humans don't get much room to emote. They are scared and tense most, and they continue being that way through the rest of the film.

I understand and, maybe, even have come to terms with the fact that action films - of course not all of them - cannot be bothered with a story. And with Transformers: Dark of the Moon I wasn't expecting one either. But the very least they could have done was get creative with the action and the 3D. Some of the ways in which one car turns into a mean machine and back, it looks like a mere cut-and-paste from either an earlier scene or another car, color-corrected.

More action, I don't mind. More of the same - I have trouble spending time, energy and money on.

Yay! Thumbs Up, by Aniket Thakkar : No great story. No great acting. Cars turning into robots and fighting it out - always awesome.

Yay! Thumbs Up, by Lakshya

Yay! Thumbs Up, by Mike Poole

@Lakshya oh well, i just felt it was more of the same.

@Shashank I like the Harry Potter books much more than the films, but the films are awesome too. Haven't watched the Twilight series.

I loved for the sake of Leonard Nimoy(Good ol' Spock) who gave his voice to Sentinal Prime. He's been lending his voice to Fringe and now Transformers 3 post his retirement from acting. Now, I know they were just trying to cash in on his hard-core fandom among Star Trek fans by showing his clip on TV in one of the shots and then making him say one of the cult dialogues from all times - "The need of the many, outweigh the need of the few" from The Search for Spock; but I loved to hear the words none-the-less. And finding such easter eggs in the movie was fun too.

I used to wake up at 6 in the morning when I was growing up, to catch the Transformers animated series on Star Plus. So am crazy about the franchise. Sony and star were good in those days with shows like Transformers, Different Strokes, I dream Of Jeanie, Bewitched, Grandiser, TMNT, etc. Good ol' days.

I don't like the way they've made the Transformer films full of campy cheesy humor, but it always excites me to watch Optimus fight it out on big screen. Who doesn't like cars transforming into giant robots and fighting with swords? I didn't go expecting a story or performance, though Patrick Dempsey of the Grey's Anatomy fame didn't disappoint. I'd given up on that long ago. I wanted to see Prime vs Prime and some good action and I got it. So it didn't disappoint, but I wonder about the possibilities with this franchise.

Now I wish, someone(how I wish he be Nolan) could reboot it the way they did with the new Star Trek movie, or with X-Men first class. Fingers crossed.