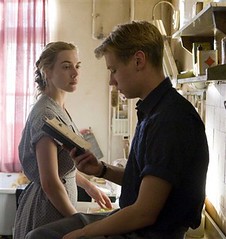 A love story, between two disparate characters that examines the frailties of the human condition.

That the specter of the Holocaust continues to prey upon the psyche of Europe and to some extent America, as evinced by the number of films and documentaries that are made with unceasing regularity, nearly seventy years post World War II, comes as no surprise, given the agony and torment that the Holocaust generated. Some of the notables in the recent past have included, Roman Polanski’s The Pianist, Roberto Benigni’s Life is Beautiful, and Steven Spielberg’s Schindler’s List. Most of them have depicted events from the Jewish point of view; of suffering Jews struggling for survival in the face of extreme cruelty perpetrated by the Nazis, or else they have been about people who in some way rescued Jews from the “Final Solution”.

The Reader deals with the Holocaust too, but presents itself fundamentally as a love story and a tale of lost innocence; a love story between two highly disparate individuals who in some ways are quite like each other. The film follows a non linear narrative; continuously juxtaposing the present with the remembered past and then plunging back into the not so recent present. This could get confusing for some viewers; but as one has to follow the lives of primarily the two main characters and their encounters with each other, a little patience is well rewarded. Stephen Daldry who earlier gave us the beautifully understated Billy Elliot is in charge here, and he makes a solid job of it.

The film opens with an adult Michael Berg played by Ralph Fiennes, ruminating over his past where he has a chance encounter with Hannah (Kate Winslet). We do not see Fiennes for nearly two thirds of the film, except in brief moments, as the story is about his younger self and that is played by David Kross. The first half of the film is shot in soft focus and in warm colours, highlighting the first flush of love for the young Michael and also possibly the discovery of his own sexuality. This phase of the film comes across as idyllic, and we slowly come to understand that both Michael and Hannah have some things in common.

The rest of the film then deals with more traumatic events, events that have influenced a nation and whose very presence seeps into the lives of future generations. The film raises questions about collective guilt, shame, individual choice and responsibility, and the notion of justice as different from law and morality. These issues are teased out through the lives of the two protagonists, who exemplify “normal” individuals, but from two different generations. Both protagonists have made choices, and continue to make them, but we are never very sure about their motives. This ambiguity in both the characters is highlighted repeatedly, thus possibly making us aware of the shortcomings of being human; shortcomings for which we have no clear answers. The strength of the film lies in how it takes the overarching theme of the Holocaust and examines it through the perspective of two ordinary German citizens. The script builds layers by commenting on the nature of forgiveness and reconciliation, by examining the role of the legal system, and by depicting the tremendous repercussions such “historic” events have on day to day living.

The film has no heart stopping moments, no heart wrenching dialogues; it is deeply emotional but it is all done in a subtle and restrained manner. As with life, the film does not offer us a closure and a neat resolution, and questions remain unanswered. Ralph Fiennes is a pleasure to watch as always, while David Kross portrays the adolescent and later the troubled young Michael Berg, very well. Kate Winslet’s ample curves are on display early on in the film, but it is in her face and her eyes, that her character germinates.

The Reader is not an easy film to watch especially for Indian viewers; we have nothing comparable to the Holocaust embedded in our collective consciousness. True, the Partition and its related cruelty and inhumanity have happened, but they seem to have been completely buried as far as popular culture is concerned, barring a stray film here and there. That the Partition has spawned and continues to spawn intolerance and violence has not really been examined and commented upon. That could possibly be because we as a Nation, collectively reject notions of History, and instead are very comfortable embracing Mythology in its stead.

The Reader is a very European film, in the sense that it examines History through a critical lens and digs deep into the collective well spring of national consciousness. Definitely worth a dekkho.

PS. The film uses the leit motif of reading and of a literary consciousness to underscore the lives of the two protagonists. Again very European, this use of literature and literacy as a perspective on human thought and action.

Yay! Thumbs Up, by Hindilyrics4u.co.in : For all English Songs Lyrics visit this website

Yay! Thumbs Up, by Hindilyrics4u.co.un : Lyricswale is a comprehensive website for all Hindi/Tamil/Telugu Songs Lyrics Fans

A brief summer romance between a fifteen year old boy, Michael and an older woman, Hannah, ends with Hannah’s sudden disappearance. Hannah later reappears, but Michael discovers that she has been hiding a dark secret.