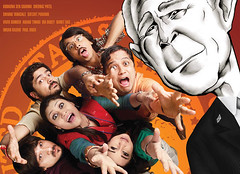 The President Is Coming

An extremely ridiculous premise used to spoof everything from reality TV shows to jingoism. Subtle humor to on-the-face silliness makes it easy to keep that smile on for the entire 90 minutes.

President Bush has provided us with loads of entertainment over the last eight years. So what if they were with headshakes-in-despair. Six Indians who represent the other billion of us wait for a handshake-in-desperation with THE man in The President is coming. It is as much a comment on our obsession as a nation with the American dream - love it or hate it - as it is about the nation who chose this man twice to lead their nation!

A Math nerd, a farmer, a stockbroker, a wannabe-Paris-Hilton, an accent trainer and a leftist novelist - are all motivated to meet President Bush on his visit to India. If that wasn't diversity enough - one of them is a South Indian, one a hardcore Maratha, another a Gujrati, then a Bengali and two "better-exposed" city-bred youngsters. You can imagine the amount of fun this medley can cause all thanks to of course - stereotyping. And they do it largely without slapstick!!

Filled to the last bit with sarcasm, The President is coming is consistent with the typecasts it initiates. It's not satire for the sake of satire. The characters are all someone you might've met - at work, in family, amongst friends, friends of friends. Which is why it is charming and the humor keeps you engaged. At no point is it rolling-on-the-floor-laughing, but I found myself snickering throughout. Yeah, in many ways it makes you feel good about yourself - Like you are not one of them, though they have been chosen to represent you - the youth of India - to a foreigner.

Each character is also the extreme of the stereotype it represents, almost on the border of exaggeration, but you know it's not. The writer takes you to the brink of a believable character and very smartly stops. Yet, a lot of the plot is contrived. And I'm not even talking of the basic premise. There are tangents that the movie goes off on which are kind-of to exhibit a character's quirk. But, since 8 characters are being squished together in 90 minutes, many of these remain half-baked.

And yet, the movie is enjoyable like a sitcom. Enjoy the now of the joke. And this is possible because of some awesome casting. From the guy who plays the geek from Bengalooru to the possibly-illiterate stockbroker. Needless to say you can laugh only if the dialogues are bright and they are timed well. And this combination occurs often enough.

It is one of those that you see on a lazy Sunday afternoon when you are in the mood for something light and when you are done you forget it. No more and no less.

Thumbs up, AOL INDIA : ...Made in English, the film is for a niche audience, but is a must watch for all irrespective of whether they love or hate America.... full review

Thumbs up, by Aparajita Ghosh, Apun Ka Choice : ...Originally a play, the story has been adapted well on the big screen by director Kunaal Roy Kapoor.... full review

Thumbs up, by Baradwaj Rangan, Blogical Conclusion, The New Sunday Express : ...The President is Coming proves that there’s nothing quite as funny as the truth – if only we’d stop squirming about it.... full review

Thumbs up, by Sanjay Ram, Business of Cinema : ...The President Is Coming is a fine example of situations that when treated right turn intensely funny.... full review

Thumbs up, by Rajeev Masand, Buzz18 : ...Uncontrollably funny for the most part, the film works on the strength of its smart dialogue and sturdy performances from the ensemble cast... full review

Thumbs up, by Khalid Mohamed, Hindustan Times : ...Shot in the manner of a student’s diploma film, it lacks that indefinable quality which elevates the unconventional into a power statement.... full review

Thumbs up, by Taran Adarsh, IndiaFM : ...The humor here is very tongue-in-cheek and even though the making is amateurish, you can't help but break into guffaws at several points.... full review

Thumbs up, by Gaurav Malani, indiatimes : ... Much like any drama, this film too relies strongly on the performances and succeeds significantly on that front.... full review

Thumbs up, Intermission, The Bookeazy Blog : ...The movie is a treat to the mature (hah!) audiences. A filler to the boredom, an addition to your ‘watched’ list, a good laugh at the end of the day.... full review

Thumbs up, Movie Talkies : ...This film is definitely a writer's and actor's dream and both departments have been handled terrifically.... full review

Thumbs up, by Anupama Chopra, NDTV : ...The film is an equal-opportunity offender taking potshots at everyone and everything, from our obsession with all things American to President Bush to Khaadi-clad NGO workers.... full review

Thumbs up, by Arpana, Now Running.com : ...As part of its tongue-in-cheek humour, the "The President Is Coming" begins stating that "the film claims to be a fake documentary" and builds the situation in such a funny manner as if it actually happened.... full review

Thumbs up, by Sonia Chopra, Sify Movies : ...They are extraordinary actors all but the funniest, perhaps, is Anand Tiwari’s rendering of the bulls-and-bears spouting, self-made Kapil Dev.... full review

Thumbs up, by Harshita Kohli, StarBoxOffice : ...It will give you the perfect laughter dose to start the New Year.... full review

Thumbs up, by Nikhat Kazmi, Times of India : ...The President is Coming is an amateurish, yet funny satire that not only lampoons Bush, but also takes a rib-tickling dekko at the stereotype of the Indian youth.... full review

Thumbs up, Zee News : ...Filled with tongue-in-cheek remarks, the film is funny, cheeky and an assured laugh riot.... full review

So-So, by Goher Iqbal Punn, Radio Sargam : ...‘President Is Coming’ is laced with an intelligent script since it depicts many social issues confidently in a humorous manner.... full review