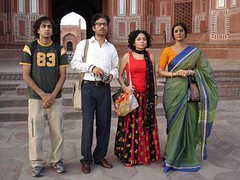 This is story-telling at its best. Especially considering there was nothing very unique or great about the story itself. I was mesmerized by Tabu’s acting. Simple day-to-day dialogues and none, if not necessary added to the elegance of the movie.

In general, I like movies which have a strong compelling story. Once in a while though, comes along a movie like ‘The Namesake’ where the direction, screenplay and most importantly - the acting make you forget that the story is ‘nothing spectacular’. And this is despite the fact that it is relatively slow paced.

The story is no doubt a truthful and authentic narration of the average NRI family who moved abroad in the 70s - from the locations and sets to the accents and reactions of various characters. Especially, how Tabu and Irrfan lose the heavy Bangla accent gradually as the years go by. This could also mean that people who haven’t lived outside India for an extended period of time might not identify with the characters. They will enjoy the narrative nevertheless.

While the characters of Ashima (Tabu) and Ashoke (Irrfan Khan) are sketched out in quite some detail and are played out beautifully, some parts of Gogol’s (Kal Penn) character seemed superficial, especially his love life. By any standards, this is a Tabu movie all the way. The lady gracefully ages from a daughter to a wife to a mother. It is amazing how with just one movement of her eye, you know exactly what her character is feeling.

However, since it is a movie that tries to be as close to reality as possible, it is the missing nuances that bothered me a couple of times during the two hours. I must admit that I haven’t read the book, and this could be one of those things that didn’t find their way into the movie.

High on emotions and jerking tears along the way, this one is worth a watch just for the performances. The beauty lies in the depth of the relationships touched upon. This is one of those rare occasions where how the story is told consumes the audience rather than the story itself.

Thumbs up, by Aparajita Ghosh, Apun Ka Choice : ...Not once are the emotions overblown... full review

Thumbs up, by Sanjay Ram, Business of Cinema : ...You can almost smell the air and feel the wind while watching the film... full review

Thumbs up, by Rajeev Masand, IBN Live : ...It's clear that the film's central theme is alienation from other cultures and one's own, and it's remarkable how the director hits the right note from the very start.... full review

Thumbs up, by Taran Adarsh, IndiaFM : ...The sequences that hold your interest are mostly those that feature Irrfan and Tabu.... full review

Thumbs up, by Subhash K Jha, Sify Movies : ...Mira Nair stays wedded to a muted emotional expression even in the strongest moments of drama... full review

Thumbs up, by Naomi Datta, Times Now : ...makes a fairly good film out of a fairly nothing novel... full review

Thumbs up, by Nikhat Kazmi, Times of India : ... The Namesake is a Haiku about Hindustan: minimalist, magical and intensely moving.... full review

So-So, by Sreeram Ramachandran, M TV : ...Somehow, whether you like these films or not, you end up relating to the characters and not wanting bad things to happen to them... full review

Thumbs down, by Pankaj Shukla, SmasHits.com : ...Scriptwriter Taraporevala tries his best to keep the people in illusion that something big will soon happen, but nothing like it takes place.... full review

Yay! Thumbs Up, by TimELiebe : Quiet episodic but very well-acted and written story of the life of a NRI family in New York.

Ashoke (Irrfan Khan) and Ashima (Tabu) get married the arranged marriage way. Ashima goes to New York with Ashoke who is studying there. They do well for themselves and start a family. The story then goes on to show the various facets of their relationship with their children.

Am glad you did that anonymous. I identified a lot with Tabu's character.

Thanks for stopping by.

Thanks for your input, Jayanta. Well, I thought Gogol's character was not fully fleshed out, especially considering that he was one of the most important character in the story. Have no complaints about how Ashima and Ashoke's characters were handled, though.

I am your namesake it seems ;o)

Well I too have something to say about the movie...

Hey namesake! Cool write-up you have there. I like the brevity of your reviews. Thanks for stopping by.

@Meetu - a few of us (I,my wife Tammy, Bruce Coville's wife Kathy, and our friend Cynthia) watched THE NAMESAKE. While it's different from the usual kind of Indian movie we've seen (understandably given it's from Mira Nair, who's one of Tammy's favorite Indian directors), it was a enjoyable, well-acted, modestly-emotional movie about...life.

I liked Kal Penn's performance more than you did, I think - probably because he felt like a typical good American young man from a non-Anglo culture fitting in in America: A bit self-centered and embarrassed about his traditional parents, wanting to make his own way in the world, but still a loving son who doesn't ditch his family obligations. Given that most of us know him as the Indian stoner Kumar in a popular movie comedy series, his nuanced performance here is quite a revelation.

@TimELiebe That makes sense. This was the first time I saw him. I have always wondered what it'll be like to see 'The Big Bang Theory' trio in different roles.

Kal Penn's been in other American movies and television shows that you'd be more likely to see, Meetu. He was one of Lex Luthor's henchman in SUPERMAN RETURNS, he was one of the numbered doctors on HOUSE, and a ::sigh:: terrorist on 24 (because what else does Hollywood cast desi actors as if not terrorists - or socially inept, thickly-accented scientists/doctors/computer experts?).

What he's mostly doing these days is working for U.S. President Obama (under his real name, Kalpen Modi), and going back to college to get a degree in International Security.