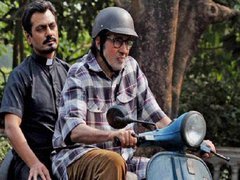 TimELiebe has given this movie a So-So(Thumbs WAY Up on the Acting, and Way DOWN for plot & pacing). TimELiebe has posted 437 comments and has rated 180 movies. See TimELiebe's page for more details.
Fan

TimELiebe has given this movie a So-So(Thumbs WAY Up on the Acting, and Way DOWN for plot & pacing). TimELiebe has posted 437 comments and has rated 180 movies. See TimELiebe's page for more details.
meeta

TimELiebe has given this movie a So-So(Thumbs WAY Up on the Acting, and Way DOWN for plot & pacing). TimELiebe has posted 437 comments and has rated 180 movies. See TimELiebe's page for more details.
meeta

TimELiebe has given this movie a So-So(Thumbs WAY Up on the Acting, and Way DOWN for plot & pacing). TimELiebe has posted 437 comments and has rated 180 movies. See TimELiebe's page for more details.