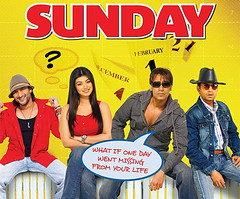 Given the humor, Sunday could have done so much better if an elegant approach was used. Instead we have a loud, garish product. A few good laughs Make it a lazy Sunday watch, if at all.

Why is subtlety so underrated? Sunday could have been so much more had it been a little less zealous about showing itself off - by misusing the music, giving the colors an extra-shine, and the overall video-album like tone of the movie.

The basic premise is not bad at all, and the writers manage to squeeze in a social message too. However, the 'whodunit' script can't escape the usual suspects - the never-ending chase, the ill-placed songs, and the stretch-till-after-it-breaks rubber-band climax. Keep in mind that I am trying my best to overlook the improbable situations, the continuity lapses, and the glaring loopholes. After all, it’s a senseless comedy which is at least making an attempt at sense. Got to give credit where it's due.

What makes Sunday worth a lazy Sunday afternoon watch is its sense of humor. It ranges from mundane to tongue-in-cheek to witty to hilarious. And the lines are carried off well by the cast - from the top (Ajay Devgan) to the supporting cast (Vrajesh Hirjee). Most of the characters have individual characteristics which help the audience identify them. This is in contrast to characters from other such movies where any character could be replaced by the other.

It’s the other technical aspects which pull down the movie to very low levels. The background score is truly overwhelming and at times completely taking on the workload of all the action - the comedy, the drama, the fight sequences. In all likelihood this was a purposeful decision, but I think the humor would have been better supported if the background music stayed in the background, instead of being in the face and making sure you notice how many songs from yesteryears the makers know.

The camera angles were all over the place and the cuts too many - which can be called stylish if you are watching a 5-minute song on MTV, but not so if it is a 2+ hour movie and you are watching it on the big screen. Also, the decisions of when to use black-and-white and when to bleach the reel seemed rather random. However, some of the transitions were interesting and creatively executed.

One thing that can be surely said about the songs when you have two item numbers is that they are going to be arbitrarily placed. And Tusshar Kapoor for an item number - now that's what I call creative! Music and lyrics are something that you wouldn't remember a couple of minutes after they are over.

I see Sunday as something that could have been much better. Especially, considering it had decent dialogues - an essential for comedies - and an adequate cast to pull it off.

Thumbs up, by Prathna Tiwari, Bolly Spice : ...Sunday's main asset is its’ apt screenplay that carries not a single dull moment... full review

Thumbs up, by Taran Adarsh, IndiaFM : ... Known for intense roles, Ajay Devgan shows a flair for comic moments and gets it right.... full review

Thumbs up, by Gaurav Malani, indiatimes : ... The movie clicks for the fact that humour is integrated with the mystery and the comedy tracks aren’t kept parallel to the plot.... full review

Thumbs up, by Harshita Kohli, indya.com : ...Although the first half leaves you a bit confused because it jumps from one scene to another too quickly, the second half more than makes up for it.... full review

Thumbs up, Movie Talkies : ...The romantic angle falls a little weak in this film as there is not much chemistry... full review

Thumbs up, by Vijay, MovieWalah : ...In his funniest role till date, Irrfan is simply brilliant when he tries to do Don-III... full review

Thumbs up, musicNmovies.info : ...Performance wise, everyone seems to be in ease... full review

Thumbs up, Times Now : ...Arshad Warsi as Ballu really makes you laugh- his one liners are the best & his comic timing bang on... full review

So-So, by Subhash K Jha, All Bollywood : ...What lifts the rather involved plot is the insouciant spiri... full review

So-So, by Naresh Kumar Deoshi, Apun Ka Choice : ...‘Sunday’ does have an engaging tale, a murder mystery, at its heart. Around it revolves the humour – a healthy cocktail of situational comedy and plain slapstick... full review

So-So, by Hetal Adesara, Business of Cinema : ...While unexpected, the climax lacks impact. It fails miserably to bring out the “Oh My God” reaction that you expect from a murder mystery.... full review

So-So, by Rajeev Masand, IBN Live : ...he so-called suspense, when revealed, is so lame that you wish they hadn't digressed from the comedy at all.... full review

So-So, by Hanumant Bhansali, Radio Sargam : ...Ayesha is beautiful, and loyal to her character as ever... full review

So-So, by Nikhat Kazmi, Times of India : ...it is Arshad who walks away with the film as a serious guy who doesn't see anything funny in his humdrum life... full review

Thumbs down, by Baradwaj Rangan, Blogical Conclusion, The New Sunday Express : ...going by the success rate of these films, I wouldn’t be surprised if, in the near future, multiplexes everywhere take to installing braincheck rooms outside the cinema halls... full review

Thumbs down, by Anand Vaishnav, Buzz18 : ...Ayesha Takia is likeable as the girl who can mimic anybody... full review

Thumbs down, by Shubhra Gupta, Express India : ...So what does Rohit Shetty do with this lot in his new film, the remake of a Telugu superhit? Loses the plot, that's what.... full review

Thumbs down, by Martin D'Souza, Glamsham.com : ...Ajay Devgan is trapped in a role which he should have left behind ages ago... full review

Thumbs down, by Khalid Mohamed, Hindustan Times : ...Ajay Devgan, should get this straight — he is not 'cute' and using an ice-cream cone as a prop won't make him more likeable... full review

Thumbs down, by Amit R Agarwal, merinews : ...Directorially, the film wastes a lot of time to introduce the characters... full review

Thumbs down, Mumbai Mirror : ...so you can get done with the car-chases and action sequences and outdoor scenes in a few days flat. Oh, the plot, I forgot.... full review

Thumbs down, by Ashok Nayak, Now Running.com : ...Sunday is a disaster... full review

Thumbs down, by Joxily John, Planet Bollywood : ...Ajay Devgan is just passing by on this lazy Sunday and does not exactly leave a mark... full review

Thumbs down, by Sukanya Verma, Rediff : ...More whos, whats and hows lead to an utterly depressing and lame climax for which Shetty simply cannot be pardoned.... full review

Yay! Thumbs Up, by Hindilyrics4u.co.in : Visit this site for all HINDI songs Lyrics

A woman is murdered. We don't know who did it. In another thread Seher (Ayesha Takia) is being chased by people she has never met. Everything is a mystery. See how the two threads meet and what a Sunday has to do with it in Sunday.

[...] Meetu expected much more from the movie and wonder’s “subtlety - whither art thou?” Sunday could have been so much more had it been a little less zealous about showing itself off - by misusing the music, giving the colors an extra-shine, and the overall video-album like tone of the movie. Linked by BA. Join Blogbharti facebook group. [...]

I've been looking for a good, unbiased review of this movie and I found it here. Thanks, Meetu! If I manage to catch 'Sunday' this Sunday, we can discuss it later in the week! :-D

much like bhool bhulaiya this genre mixing doesnt seem to work. i was afraid they would bring in action too..what with the cars blowing up and all.
the acting was pretty good, some of the scene transitions were very nice and the delhi monuments were well shot. the background score was way too loud, the songs unnecessary and the juvenile gay jokes avoidable.
you should put a "could-have -been-better" in your rating scale.

So, did you catch it over the weekend, Ideasmith?

Chugs, the blowing up did make it action...and don't forget the autumn-leaf-fight-scene! "could have been better" - so tempted to add one under each rating, so i can have a nine-point scale!

Meetu: Nope, didn't manage it. And this weekend and the next and any time in between are reserved for the Kala Ghoda Art Festival. :-p I guess I missed a Sunday after all!

Oh, you have so many better things to do, then! How does a missing Sunday matter?

Nirmal, I can actually imagine foreign backpackers cramming in to save on money. I personally know a couple people from UK who have travelled on top of buses!

But yet, I know what you mean. Even if this one can be argued out, there are surely many more which cannot be. Thanks for taking the time to have this discussion.

>> I haven’t watched enough of the movie

Thanks and will do!

For all Hindi/Tamil/Telugu songs lyrics

Visit this site for all HINDI songs Lyrics