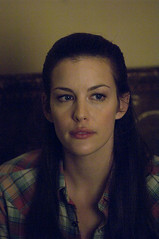 Strangers has a smart plot and is played out very well by the lead actors. However the classy story-telling format takes away from the nitty-gritty of the characters and their motivations.

Stories that don't have any characters that you can feel for are mighty difficult to narrate. And it is the narrative style here which though different is a bit overdone. So, while the plot refrains from spoon-feeding (thank you!), the leaps in the otherwise stylistic narration take away a bit of the crispiness.

The non-linear narrative keeps you alert but gets in the way of character development. Which is why the gray characters seem distant. You can't sense their desperation. That none of the characters are wrong and no one is certainly all right is beautiful. But, before you begin to get the nuances of the character and sense their frustration, the narrative shifts to another time or place or both. This is very disorienting, especially towards the end.

Besides that however this technique of story-telling is used effectively to pique interest. The hard work that goes into the details of editing is apparent. Where exactly to cut from one sub-plot to the other is ever so important in such a movie. While these cuts worked at most times they seemed to have adversely effected the pacing towards the end.

Strangers offers another great performance by Kay Kay Menon. And it is a pleasure to see Jimmy Shergill in a role that does his talent justice. It is to their credit that understanding what their characters were feeling, at any particular moment, needed no words. The relatively sparse dialogues are smart and at the very least cliché-free. The women on the other hand are not given enough room to showcase their capabilities. It seemed as if a lot less attention was paid to their roles and lines, which translated to lesser screen-time.

It was nice to see use of handheld camera where it made sense, to create effect. E.g. in the train shots. Use of close-ups to bring focus to the expressions of the speaker at dramatic moments seemed purposeful and thus created the necessary impact. The lighting too was used tastefully.

The decision to go the stylistic narrative route at a slow pace along with a 90 minute run-time has taken its toll on character development. An interesting plot loses steam because of the urge to do too many things in too little time.

Parental Guidance: The basic concept of the movie is extra-marital affairs and the tone of the movie is very serious. However, there is no on-screen sexual or violent content.

Rahul Bedi (Jimmy Shergill) meets Sanjeev Rai (Kay Kay Menon) on a train and wants to spend his journey in getting to know his fellow-passenger. What their conversation is all about is for you to find out.

well i didnot personally like the movie. in fact it was pathetic. i was bored in the first half and slept the second one. the acting is marginal over all close to 2/5 thats it. dont go to the movie if you hav somethin better to do