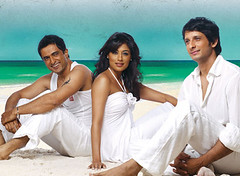 An intense look at characters, their motivations and their inter-relationships. If only the resolution didn't seem funny and thus out-of-place.

Over 40 hours since the country has been held hostage. Each one of us hostage to TV channels, internet reports, or twitter and some of us hostages inside the Taj, or The Oberoi or Nariman House. Each one either scared or worried or angry or frustrated or some combination thereof. But each one of us helpless.

What can we do? Abuse the government, opposition, media? Did that and got bored within 20 minutes. What else can I do? The only thing I can think of is to panic as little as possible and continue the routine. So here I am doing what I do every Friday. Trying, albeit unsuccessfully, to ignore what's happening 150kms away, trying to keep my angst on the world outside from making a judgment on the world inside the dark, secure(?) cinema hall.

Bold themes and atypical resolutions are fascinating. And this time around Onir explores relationships in detail - the love angle, the love triangle, the husband-wife, the parent-son. Unexpectedly though, the brother-brother relationship is left half-baked, even untouched. Yet, there is enough in there to keep you engrossed and wonder, what next?

The basic premise, the love triangle, takes you through the confusion of the mature characters. There's no beating around the bush. The characters all behave like a normal person in that situation would. The second premise feels like it is right out of a Mahabharat side-story that made it to an Amar Chitra Katha comic of its own. Boons and curses. And then the inevitable loophole or way-out of the curse. It was comical too, but very contemporary. At one point I actually thought Shabana Azmi was going to pull a Kunti

Maybe I'm just seeing war where there isn't any...

Sharman Joshi is just awesome as the unsure guy who is torn-between-two ideologies. Chitrangadha Singh looks ravishing and convinces us that she's one confused woman. Boman Irani as the daddy cool, and Shabana Azmi as the mom wanting to fit in with the new generation, are used more as comic relief. But they fill the screen with life even when they are taunting or angry. The chemistry this cute, oldie couple shares makes you want to be like them, when you are older.

I want to grow old. I don't want to die today. I want lessons on how to be that sarcastic mom-in-law...

Of course, the witty lines - funny or otherwise - help every one set the right mood throughout the movie. Your heart might not reach out to any single character, because none of them want to do the "right thing". But, except for Harry's (Sanjay Suri's) exaggerated selfishness, the situations are real enough for us to keep judgment at bay too. Each character seems right in their confined space. And the lines get blurry, as they always do, as you add in external factors - people or situations.

This is one of those movies I'd watch again when I'm in a less agitated frame-of-mind. If not for the unusual storyline and climax, as a study of characters.

Yes, the situation has improved and the mind feels more relaxed now...gotten used to it? Already??

Thumbs up, by Nikhil Kumar, Apun Ka Choice : ...In a movie like ‘Sorry Bhai’, it’s more appropriate to judge the actors’ job from viewpoint of the chemistry between them rather than individual performances.... full review

Thumbs up, by Rajeev Masand, IBN Live : ...Sharman Joshi plays his part with such sincerity, you’re willing to look at his flawed character with renewed sympathy.... full review

Thumbs up, by Debatru De, India Target : ...The film is a total fun and romantic comedy laced with lots of moments that will surely make you cry and smile at the same time.... full review

Thumbs up, by Subhash K Jha, Now Running.com : ...This isn't a film about confrontational relationships. The characters prefer to keep it nice and peaceful on the surface.... full review

Thumbs up, by Subhasish Chakraborty, Passion for Cinema : ...Technically, the film is good. The cinematography and sound are excellent. Screenplay and dialogues mostly come across as witty... full review

Thumbs up, by Raja Sen, Rediff : ...Azmi is the film's crux, and you honestly couldn't ask for a better pivot.... full review

Thumbs up, by Sonia Chopra, Sify Movies : ...The chemistry between Azmi and Irani is just crackling; their intelligence, talent and comic ability shining through ever so often.... full review

Thumbs up, by Nikhat Kazmi, Times of India : ...The saas-bahu relationship never got more feisty and funny.... full review

So-So, by Gaurav Malani, indiatimes : ... But despite being conventional, Sorry Bhai is not essentially predictable.... full review

So-So, Movie Talkies : ...cinematography of the movie is very good. Mauritius has been very well canned with its picturesque beauty, the water, the beaches etc.... full review

So-So, by Anupama Chopra, NDTV : ...The actors add some heft to the skimpy script. Sharman Joshi is wonderful as the hapless bumbler, bewildered by his own emotions.... full review

So-So, by The ThirdMan, Upper Stall : ...Technically, it is refreshing to see a film where the technical department, be it the sound design, background score or editing, has a level of subtlety and is largely unobtrusive and sticks to the demands of the script,... full review

Thumbs down, by Jaya Biswas, Buzz18 : ...Sorry Bhai has nothing outstanding to offer besides a few amusing moments.... full review

Thumbs down, by Khalid Mohamed, Hindustan Times : ...Onir's direction is as sincere as a Boy Scout’s which is why you wish he’d get a script that syncs with his heart and mind... full review

Thumbs down, by Sampurn, real bollywoood : ...The film is predictable from the word go and the dull pace literally puts you off to sleep.... full review

Thumbs down, by Harshita Kohli, StarBoxOffice : ...Onir's film has everything going for it. But only on paper. The screenplay needs to be a lot tighter and the acting a lot more awake.... full review

Siddharth (Sharman Joshi) falls in love with his brother's (Sanjay Suri's) fiancée Aliya (Chitrangadha Singh). That has to have complications.

Hey Karmishtha...i wrote this review this way only because i couldn't get the situation in Mumbai out of my head that day. Why did I watch the movies in the first place, then? Because just like there is no reason for schools to shut down in Pune when Bombay is in trauma, there's no reason for me to stop work.

It's sad that the search engine brought you here.

Sorry Bhai is the latest film in the market and hope it will do the good thing. The song of the film is very nice.

Thank you dushyant kanal, I sure will!

Saw this on DVD tonight, Meetu - it was…different than we expected, and surprisingly likable if a bit dozy of a movie. The premise was very similar to MERE BROTHER KI DULHAN, except played with no big musical numbers (except the one over the end credits) or comedic shenanigans, and more heart than you'd expect for a premise that is (as you point out in your review) as old as storytelling itself. I have to say, how they worked out the story hole they'd dug themselves into was - innovative, to say the least! :D

Our favorite characters weren't the kids, but Boman Irani and Shabana Azmi as the feuding but loving parents of the two men. Irani may have started a bit larger-than-life for his realistic character, but he gained depth and poignancy as the movie went on. We liked it, and didn't expect to - so that was a nice surprise!

TimELiebe has given this movie a Yay! Thumbs Up(Realistic Depiction of a Bollywood Staple Plot - No Song&Dance Numbers, Just Well-Drawn Characters). TimELiebe has posted 434 comments and has rated 179 movies. See TimELiebe's page for more details.
meetu

@TimELiebe yeah, it isn't a bad film at all. I'm glad you liked it. A little different from the regular masala. :D