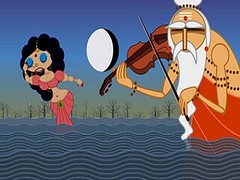 You know you’re in for a treat the minute you see the level of animation in Sita Sings the Blues. It’s cute and simple and yet incorporates multiple layers to tell one legendary story. Paley has found a way to mix the two most strikingly opposite forms of art – the blues and traditional Indian mythology in a way that lends to the flavour of the film. It’s a set of vibrant versions of The Ramayana that should not be missed.

The Ramayana has been re-told and re-depicted countless times. I first heard of the story of Ram and Sita through my Grandmother, and back then it was a pretty straight one - a flat, legendary epic about morals and bravery. Most of us try to retain the tale as it is, which is why we have Ram-Leela and innumerable theatrical versions of The Ramayana, and I’m sure when I tell the story to my children, I won’t change it one bit. Sita Sings the Blues, on the other hand, celebrates the watered down versions of the Ramayana, as we know it now in the 2000s, in the most colourful, polychromatic manner possible.

Nina Paley’s Sita Sings the Blues is not just an animated version of The Ramayana. It incorporates multiple narratives of the same story, told in different settings and tones. The primary narrative is the epic tragedy – conveyed by animating static paintings/photographs of Sita, Rama, Ravana and Hanuman, which is backed with a morally serious voiceover.

This narrative serves the educational purpose of the film, using the traditional dramatic style of story telling. It sets it apart from the musical episodes of the Ramayana, which uses a more comfortable and digital animation. These episodes include jazz vocals of the 1920s by Annette Hanshaw, suggestively trying to imply a convergence between musical entertainment and tradition - also because story telling for us has now become just that. Sita sings the blues in this narrative to tell us her story.

The most endearingly ironical parts of the movie are the two parallel narratives, which run alongside this vibrant play of characters. The first one uses shadow puppet animation, voiced by 3 Indians who seem to know only bits and pieces of the Ramayana, recite the tale in an urban and confused manner. One can relate to their recitation mostly because the language is colloquial, the facts are half-baked and derived by searching deep into those memories that have been passed down from generation to generation of every Indian home. It’s endearing because any of those voices could easily be me – and that is a striking vision on the director, Paley’s part.

All of these multiple variations of the story are interspersed with a modern-day autobiographical account of a married couple (Nina and her husband) living in San Francisco, who face turbulences because the husband leaves for work to Trivandum. The animation is like a pencil cartoon, and the idea is to relate this with the sacred story only to contrast it with current day happenings. While on one hand, you have devotion and everlasting love between Sita and Ram, you also have an American couple that stands on the absolute other end of the spectrum.

The DVD of Sita Sings the Blues also has a collection of the movie’s soundtrack – which is absolutely charming. Get hold of the DVD to learn more about Annette Hanshaw and for an audio interview with Nina Paley, where she discusses how the idea came to her, and more about her autobiographical story in the film.

Sita Sings the Blues is an absolute deconstruction of conventional story-telling customs, which served one purpose and had one linear story. These parallel narratives whirlpool into one basic idea – In how many different ways can you tell the same story? Each narrative uses different animation, a different tone – be it musical, modern or epic and they all come together to endorse plurality. It’s a plurality of understanding, plurality of ideas and plurality of existence.

Yay! Thumbs Up, by TimELiebe : Low-budget, well-done animated version of THE RAMAYANA, with early jazz songs and clever commentary.