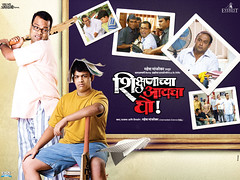 A valid point made but nothing we don't know from our experiences. Also unfeasible/impractical solutions provided make it further from real life. And sarcasm is used to preach.

Science, Commerce, Arts? - A very common question 20 years ago, when I was supposed to decide my line of interest at age 15.
"Commerce?" - cool, you can do a CA, ICWA (MBA was a little too much to think of for a "girl" from my community).
"Science?" - oh excellent. Engineers, Doctors, they have a lot of 'scope'.
"Arts?" - Why would you do that to yourself? You are smart, intelligent, you scored well. No one talks about mere mortals.
I went on to finish my CA, never practiced accountancy, and years later figured I'd like to watch movies and write about them. Only then did I know, there were actual books and courses I could have done that were closer to this field. Who do I blame? The system? Parents? Myself? A film that touches upon this theme, is sure to touch a chord within me, but…

Shikshanachya aaicha gho says the system and over-ambitious, misguided parents are responsible. Fair enough. What's the solution? They haven't given a practical way to resolve this. I understand that the onus of providing a solution does not lie on a movie, but without that the film was seriously hollow. I'm told what I already know in a loud and brash manner. It doesn't really make me want to think about it after I'm out of the theater. Let alone take action to correct the wrong.

What it does though is that it involves you in most parts for the two hours that you are there. You want to reach out to the guy who's heart is in cricket but is forced to learn 12*6. You want to shake his dad awake for cornering his boy thus. But, the resolution to the conflict comes very conveniently and harshly. In its way, the film tries to tell the parent, "Look at what had to happen for you to realize you are wrong!" And when the 'happy realization' dawns upon him, it creates an unrealistic monster.

Reaching out to the higher ups in the system is surely a way, to correct the situation. But they make the system look unbelievably approachable. However, I liked the fact that our suffering parent was surrounded by the nicest of people. He had neighbors who'd help and money-sharks, who reached out to him. While it could be a little too good to be true, but I'd like to believe that the world is not that bad-a-place after all. Example, I have good neighbors, so there's no reason for a film to not have them.

But barring that, the other stuff in the film, like the acting and dialogue, are more than annoying. The dialogue and the "preachy" tone in which it is delivered in has a very specific theatrical quality, which doesn't work in a film. Similarly, the acting looks more like it is for a live audience.

While many of us would find the issue close to heart, somehow it lacked the depth and thought to seep deep into me. Though you see the angst that the makers and the characters might be feeling, it doesn't take you further. It's unfortunate, but it is a good start-off point for better films on this topic.

Do movies like actually provide any food for thought..? Like 3 idiots didn't other than say what was wrong.. what about this movie?
And yes the title has put me off..

No Janaki, that's what I'm trying to say. There are no practical solutions. And if they didn't want to give a solution, it'd have been just fine. It's not a films onus to give solutions to problems created over ages, but giving such solutions is just making the viewers laugh at them and a mediocre product.

There is that...
also would like to read a review by you on Natrang..

Coming up in just a bit. Writing it as we exchange comments :)