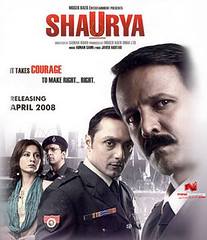 Shaurya dishes out a strong flavor of anti-fundamentalism with a negligible measure of sermons. That in itself is a rarity. While it might not rise up to the standards of "A few good men", it has its intense moments that work.

NOT A REVIEW - just some thoughts from a look at the official website...

Shaurya, which means courage, seems like a movie with a backdrop of war or border politics. While war movies are not for me, I love it when they have a story set in context of the army/military life. If done well, it can be great cinema. I enjoyed 1971 for instance.

This line in the director's note caught my eye -

I don't know about the box office success of the film but even if 40 people see the film, I want 39 to say that the film touched them.

I think saying that out loud takes courage! Of course, makers want their movies to be seen. But there are only a handful who accept that they haven't made one for mass appeal.

We have a delicious non-"star" cast Rahul Bose, Jaaved Jaaferi, Kay Kay Menon, and Minissha Lamba. What's more some of these people have individually written at the movie blog! While the word Shaurya means standing up to your pre-defined morals to Rahul, it's all about sacrifice and selflessness for Kay Kay, Here's what G. R. Khairnar and Sabrina Lall have to say about it in short paragraphs. Amrita Rao sees courage in the little things that make life and Rani Mukherjee is smitten by the courage women possess.

All very good...unless of course, it is written by someone in PR. But, even if we give them the benefit of doubt, I hope the movie is not as preachy as the site reads. I seriously hope some energy is reserved for actual dialogues in the movie and hasn't been all spent on the voiceover at the website.

I don't like reading the synopsis of the movie, but since it was the first thing on the site, I read a couple of lines. They, in combination with the background picture, instantaneously reminded me of one of my favourites - A few good men. Could be a good thing or a bad thing...hmmm...

Yes, it most certainly is a rehash of A few good men. The context has been Indianized effectively. And this despite including Indian movie-making elements like melodrama, out-of-context absolutely-unnecessary songs, difficult-to-digest climax, etc. The Rob Reiner courtroom drama is more about its characters, Shaurya is more about the issue it is trying to highlight. I would say the best way to appreciate the latter is by blocking out the former. After all, even if Kay Kay Menon is no Jack Nickolson, he still is Kay Kay Menon. Not impossible. Give it a try.

Most of the first half is spent in building characters and you hardly know a fact or two about the case, army lawyer Major Siddhant (Rahul Bose), has to handle. Very deliberately then, the movie moves on to the strong point it wants to make - egos of people in power need to be punished for misusing that power to dominate over minorities (women, religious minorities, etc). This is, of course, done using only one of the minorities as a case in point. But the general application is confirmed when you read about various such cases where the same principle can be applied. It takes courage but it needs to be done.

In my mind, it takes courage just to cast Jaaved Jaaferi in a non-slapstick role. It's no earth-shattering performance, but a mere exchange of glances showcases what this man is capable of. Rahul Bose with his casual-cum-sincere demeanor makes you believe the transformation his character goes through despite the gaps in the script. That you feel like slapping Brigadier Rudra Pratap Singh for his overconfidence and high-strung attitude, says it all about Kay Kay Menon.

Now, why overacting is reserved for the women, is beyond me. Of course, I am not asking the men to overact too. But, it really makes me wonder about the kind of women moviemakers have in their lives? They get shrill to express excitement (Minissha Lamba) and are exaggeratedly listless when they are sad (Seema Biswas).

Besides that, Shaurya's characters become believable not because of the way they are etched and shaded-in but because of the dialogues each of them is given. Each character is strongly opinionated but very rarely does one choose to lecture the other or the audience.

The conversational tone might have a lot to do with the camera angles and compositions chosen. Tight close-ups or just having the speaking person in frame has been noticeably avoided. This makes it look more like a dialogue rather than a monologue even though there are relatively long monologues throughout the movie. Other than that the coverage of the scenic beauty, the editing, and the background music are very below average. Abrupt cuts are very disctracting. And did loud compositions ever work in displaying the character's internal conflicts?

Had these things been a bit better, Shaurya would be a crispier, tighter output. Nevertheless, the story and dialogues supporting the story are strong enough to make a case for this one.

Thumbs up, by Aparajita Ghosh, Apun Ka Choice : ...he way Menon lends a domineering and sarcastically condescending persona to his character leaves you flabbergasted... full review

Thumbs up, by Daliya Daspurkayastha, Bollywood Mantra : ...The screenplay and cinematography by Carlos Catalan’s is very tight and flawless... full review

Thumbs up, by Martin D'Souza, Glamsham.com : ...The script could have been tighter; like what for instance is the role of journalist Kaavya Shastri (Minisha Lamba)?... full review

Thumbs up, by Taran Adarsh, IndiaFM : ...SHAURYA isn't a flawless script. But it has been treated with utmost realism and sensitivity by Samar Khan.... full review

Thumbs up, by Anupama Chopra, NDTV : ...But incredibly enough, Samar, his writers and cast pull it off well. Of course the best scenes, like the explosive climax, are cogged, right down to the dialogue, but Samar adds a Hindu-Muslim angle, some nice male bonding scenes and a moving mother figure to the story... full review

Thumbs up, by Subhash K Jha, Now Running.com : ...Credit must go to the writer, director and the dialogue writer (Aparna Malhotra) for telling it like it is about the alienation of a community... full review

So-So, by Khalid Mohamed, Hindustan Times : ...All seen and absorbed, the result is bearable... full review

So-So, by Jaykumar Shah, Planet Bollywood : ...Now we come to the culprits that made this movie less than it could have been.... full review

Thumbs down, by Dipali Turakhia, Buzz18 : ...The promos were very deceitful and if you hoped a fantastic version of Few Good Men, then you my friend will be sorely disappointed.... full review

Thumbs down, by Rajeev Masand, IBN Live : ...What I can't understand about filmmakers who plagiarise successful American films is their misplaced holier-than-thou attitude;... full review

Thumbs down, by Raja Sen, Rediff : ...what does it mean for a film called Shaurya, a film about true valour and the human spirit and a moral code, turning out to be yet another rip-off?... full review

Thumbs down, by Raja Sen, Rediff : ...The ethics of shameless plagiarism aside, the fact remains that tight and loyal adherence to a great script ensure a pretty watchable film,... full review

Yay! Thumbs Up, by Forex Market : this movie is very lovley yaar

Yay! Thumbs Up, by shashank singh

Nay! Thumbs Down, by Rajan

[...] recommends Shaurya. With a cast of Kay Kay Menon, Rahul Bose, Jaaved Jaferi and Seema Biswas, it sure sounds [...]

Hey Rupali! I did catch the movie and enjoyed it. Here's my full review.Well, a lot more than the styling is like A few good men. The major plot points are same. Anyway, it's all okay, since it's done fairly well.

Thanks for clarifying about the blogs. It would be nice to know in what capacity you were involved with the movie.

Thanks for stopping by and taking the time to comment. Much appreciated!

would hv never watched it had you not recommended and must say enjoyed the flick.

I completely disagree. This movie was a joke. They had their facts wrong. Shoddy research. And for whatever Rahul Bose's good points maybe, emulating Tom Cruise isn't one of them. It was plain hilarious watching that march of his, esp. with the aviators on! A lot of technical errors too, but you don't focus on those so I'll skip that.

Oh well, Sumit, I liked it despite its flaws. There were things that were done well, and I liked that. I didn't get the sense that Rahul was trying to emulate Tom. Actually, I felt Kay Kay was emulating Jack Nicholson, but he did a pretty good job.

It will be cool to know the technical flaws too. Always ready to learn ;)

what is forex trading system

But let me tell you a little something: Gone are the days when you simply start a blog and people come flocking by the millions. People need to be able to find you and no, they aren’t going to come looking.