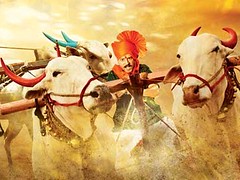 wogma rating: Watch, but no rush (?) - Cinephiles, though, could venture to theatres for this one.

Sharyat is a film whose strongest point is its technique. Rarely does one see a Marathi film where pains have been taken to make sure that the film looks good. With the backdrop of bullock cart races in rural Maharashtra, Sharyat has a nice, rustic feel to it, some strong characters and most importantly, some impressive production, considering it is a Marathi film. However, the mediocre screenplay pulls the film in the opposite direction. The weak script notwithstanding, Sharyat is a film that you won’t regret watching, primarily because of its look and feel, its interesting premise and the character of the protagonist, played by Sachin Pilgaonkar.

Sharyat made an impact on me with its posters itself – with Sachin Pilgaonkar’s fiery look and the rustic feel that I got from it. While the film itself will definitely not re-write cinematic history, Sharyat is an important film for Marathi cinema. Finally, technique in Marathi cinema seems to be coming of age.

Sharyat has some impressive production, looks slick in spite of the village setting, and also manages to squeeze in a few Matrix-esque bullet-time shots. True, there are times when the technique seems over-done. There is an overdose of motion blurs and ramped jib movements, and the film often appears excessively colour-corrected. However, I’m willing to overlook this in the interest of the larger picture – no one can say that technique hasn’t reached the shores of Marathi cinema.

Directed and co-written by Viju Mane, Sharyat firstly needs to be lauded for its choice of theme. It revolves around the traditional bullock cart races that are held in rural Maharashtra, and the fierce battles that ensue to gain a specific honour that victory in the annual races bestows. Sachin plays Dhananjay, an ace bull racer who hasn’t raced in five years because of a tragedy that forced him to leave the village altogether. Circumstances bring life a full circle for him, as he has to race yet again for a multitude of reasons.

The film, not surprisingly, has its share of flaws, its screenplay being the biggest. It could have been far more taut even in its main plot; a half-baked love-story on the side makes it worse. Thus, in spite of the fact that the film’s runtime is just a shade over two hours, it stills seems longer than it needed to be. It is also often prone to some over the top drama and inane plot twists.

Adding to the film’s woes are three unnecessary songs - two item numbers (one of them with a particularly derivative and silly hook line) and one romantic song (which incidentally looks a lot like ‘Ishq Sufiyana’ from The Dirty Picture.) The songs themselves are fairly ordinary. The only memorable song in the entire film is the title track ‘Sharyat Lagli’. It is catchy and is placed well in the film.

While there are no major complaints with regards to the performances in the film, I often found myself wishing for Sachin’s dialogue delivery to be a little less stilted and stoic. He has a great intensity and completely looks the part. But there were times when the way he delivered his dialogue just didn’t do justice to the emotion in his eyes. Sachin Juvekar, who plays Sachin’s brother, is mostly endearing, with the occasional tendency to go over the top. Veteran Marathi film and TV actor, Neena Kulkarni (also a known face in Hindi films) plays her part well. Tejashree Pradhan is pleasant, but has a truly insignificant role.

Which brings me back to the technique. Marathi films, by their sheer lack of commercial viability, will never be able to match the scale and technique of Hindi or Tamil films. In fact, these days even the average budget of a Malayalam film is significantly higher than that of a Marathi film. While that truly is a pity, the bright side of it is that Marathi filmmakers are forced to stretch every rupee to try and make their films ‘look good’.

For that reason alone, Sharyat (reportedly made at a budget of about 3 crore) is a film to be proud of. In spite of all of its glaring flaws which otherwise could have put me off, Sharyat is a film that I don’t regret spending money on, because I could see the filmmaker’s intent to make sure that no one could look at this film and say that Marathi films are shoddily produced. Hopefully, Sharyat will set a new precedent for technique in Marathi cinema.

Yay! Thumbs Up, by Aniket Joshi

Recommended, because of the nature of the central plot