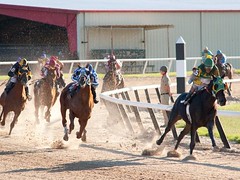 Life of Penny Chenery and her horse Secretariat which went on to become a record setter back in 1973. Great story but unimpressive screenplay makes this one engaging for those who know about horses and horse races. Others can watch to find out about it.

Based on a true story, the movie is about Penny Chenery/Tweedy (Diane Lane) who, in her unwillingness to just sell off her father’s farm, ends up owning and breeding one of the greatest racehorses. A semi-retired trainer Lucien Laurin (John Malkovich) who took up the responsibility, does probably the best job that one could. And its groom Eddie Sweat (Nelson Ellis) who knew the thoroughbred for the longest time, handles him with the same dedication that he handled several other winning horses. The chestnut colt was one of the youngest horses to win races, and two of its records still stand today.

At a slightly clumsy pace, the movie is not exciting at all the times. It is slow and un-happening in large parts which one might as well sleep through. But the other extremely well-done sequences compensate for the glitches. The dialogues are just at par, with only a few good lines here or there. Most of the conversations fail to to engage, where they could have been phenomenal inspirational lessons. But then that is what makes the film look real and unexaggerated in the end.

I would have honestly loved to see better acting from Diane Lane, where she's more free and genuine. The forced dialogues and uncomfortable body language for a lead is a huge put off. Malkovich is apt in his little-crazy trainer role, which I am sure, comes from the real Lucien Laurin. The best is Nelson Ellis (Yes, Lafayette of True Blood), in his limited role gives precisely a father’s reflection as he grooms the much famed horse. Margo Martindale does justice to the father’s secretary, Miss Ham who has been around horses and races more than Tweedy and looks after the family. Appreciable was Otto Thorwarth who plays the horse’s jockey, who is a real life jockey and now wants to pursue acting.

I really enjoyed the second match seen on TV as the Tweedy family saw it. It was the recording of the actual race. Also the other races, which last for a short while but show real action. I also enjoyed the mute nuances, which said a lot more than any of its dialogues.

The movie is good if you can deal with the slow parts. It has a great story but lack of pace and directional competence will make this one a martyr. If you are really keen, then watch on screen.