A muted and dragged form of storytelling that can be watched with a lot of patience.

With an impressive beginning and a brilliant end, Rukh meanders in the middle, tediously, slowly and monotonously. Yet the middle does what the storytellers had supposedly intended to do—condition you to a black and white perspective about its characters and events, which it later, very successfully, also challenges. Thus forcing you to see the same thing from different perspectives or rukh.

Overall, story-lovers should see it to experience the conditioning and un-conditioning. That aspect is good. But it will require some effort from you to bear the pace and minimalism.

Rukh uses a muted and dragged form of storytelling to portray characters who have grappled with their past for quite long, and seem to have lost all steam to counter any more surprises in life. They are in the midst of the so-called moving-on phase when an incident forces them to revisit the past and make sense of it by discovering the truth.

The difficulty of unraveling the truth is compounded by the characters' ambiguous (you can call it grey) rendition—a sorrowful yet detached widow, a distanced yet inquisitive son. There’s also a friend and corrupt business partner whose true intentions and expressions are hard to read. The actor playing that part—Kumud Mishra—was, it seems, asked to keep it transient (he, however, fails to make the transient look effortless and natural). A couple of other associates also straddle the black and white tracks. The confusion this creates is boggling but later you realise it is also important.

Rukh can also be called a coming-of-age film because the son's inquisitiveness is the driving force, the catalyst, which brings him not just the respite but also the necessary redemption.

Performance wise, Manoj Bajpayee is brilliant in a muted cameo, he does more with his appearance and body language than with words. Everyone else appears grappling with the desired levels of muteness. Sometimes it works, sometimes the actors give away the directorial effort put in making them look and act their part. 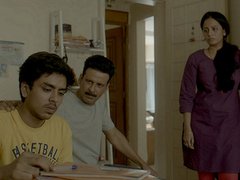 Three songs are embedded into the narrative but fail to provide any poetic interlude to the audience. They merge with the widespread monotony.

Overall, story-lovers should see it to experience the conditioning and un-conditioning. That aspect is good. But it will require some effort from you to bear the pace and minimalism. You can expect good cinematography though – framing, and composition is particularly good, almost by the book. Dialogue-lovers will be disappointed, they are too minimal in general and sometimes sound like they are deliberately written to calculatedly shroud the truth. Performance-lovers may also not feel fully satisfied.

I will say give this a miss. However, if you decide to put in the effort to watch, watch it in a sitting. Don't take breaks in between. Allow the conditioning and un-conditioning to happen.

Thumbs up, by Baradwaj Rangan, Blogical Conclusion, The New Sunday Express : ...A gun shows up in a scene and foreshadows its second appearance a little too tidily. A game of chess is abandoned midway (the king, subsequently, is plucked from the board) — again, too tidy. But the rest of the film is a mess, in a good way. The people are a mess. The situations are a mess.... full review

Thumbs up, by Rahul Bharadwaj, Desi Martini : ...Do not miss Rukh , Bollywood is in big time creative mode with this one. ... full review

Thumbs up, by Devesh Sharma, FirstPost : ...If there is any stance of this writer that he found challenged was that films do not need aggressive promotional campaigns to make a mark. All a powerful film needs is a good first impression through the trailer, which packs in a substantial chunk of the story, and the ability to tell much more which surprises the audience who choose to give it a chance. ... full review

Thumbs up, by Rohit Vats, Hindustan Times : ...Rukh has its own narrative technique. To categorise Rukh as an art-house film would be an injustice to Atanu Mukherjee’s talent. It’s a ‘different’ film, for the want of a better word. ... full review

Thumbs up, by Saibal Chatterjee, NDTV : ...This film, an exemplar of the virtues of staying true to a chosen creative arc, announces the advent of a new writer-director clearly blessed with instinctive control over the medium. ... full review

Thumbs up, by Rajeev Masand, News18.com : ...This is a heartbreaking indie about saying goodbye that nevertheless ends on the high note of hope. ... full review

Thumbs up, Sify Movies : ...Overall, despite a few blemishes, Rukh is a film that keeps you riveted. ... full review

Thumbs up, by Reza Noorani, Times of India : ...It's a rare, mature thriller that delivers the goods and keeps you engrossed. Don't let this small film slip under the radar, because this will stay with you long after you leave the theatre. ... full review

So-So, by Bobby Sing, Bobby Talks Cinema.com : ...Overall, RUKH is an above average, performance oriented film that can only be appreciated if you are ready to go for a different, slow moving narrative asking for a lot of patience. ... full review

So-So, by Johnson Thomas, Free Press Journal : ...As a result, you never get to the point where you can empathise with the characters and their myriad problems. The background score by Anjo John has its moments but even that doesn’t help establish a firm foundation. This film may hit all the right keys but the sound it makes is not as harmonious as one would have expected. There’s barely anything here to leave a lasting impression! ... full review

So-So, by Umesh Punwani, koimoi : ...Rukh is not your usual Bollywood thriller, it has subtexts, every scene defines something. It requires only your patience and nothing else. Go for it only if you can keep your phones aside for the entire film and sell yourself to it. ... full review

So-So, by Kunal Guha, Mumbai Mirror : ...Rukh aspires to be arthouse but doesn't quite manage to deliver a prophetic message or pass for an edgy thriller. But to its credit, since it unveils the story at a leisurely pace, it keeps you curious for a large part of its runtime. ... full review

So-So, by Sreehari Nair, Rediff : ...Like Divakar’s final duel, in which he forsakes the coins on the board and keeps his chess-loving father suspended in limbo, Mukherjee, after establishing his unique voice, leaves the game unfinished. ... full review

So-So, Zee News : ...Overall, despite a few blemishes, "Rukh" is a film that keeps you riveted. ... full review

Thumbs down, by Suhani Singh, india today : ...Mukherjee lingers on with the far-too-restrained tragedy, it's the performances here that deliver. Tambe does a credible job as the grieving wife-mother struggling to cope with a death. But the shining, all-too-brief, star here is Bajpayee whose work brings this drama the poignancy it needs.... full review

Thumbs down, by Manisha Lakhe, Now Running.com : ...The TV show Crime Patrol has better plots (and more coherent dialog) you think. Then the back-story of how the surly son beat the heck out of a school bully and was then sent away to boarding school pops up. Instead of empathising with his teen angst at being sent away, you now wish the lad was the one in an accident instead. ... full review

Thumbs down, by Namrata Joshi, The Hindu : ...In the name of introspection, understatement and subtlety the performances don’t rise beyond the straight, the blank and the deadpan. This, despite an ace bunch of performers. Only Smita Tambe as Dhruv’s mother Nandini makes for a fluid presence. Rukh is too wilfully hemmed in and held back for its own good. ... full review