You'd expect a RoboCop reboot from the director of Elite Squad to be an entertaining action flick. Instead, what you get is an all-too-familiar attempt that barely holds its own.

If you're a fan of the original 1987 RoboCop, this 2014 version will disappoint you sorely. It has none of the spunk and clever audacity of the earlier film, and takes itself entirely too seriously. Thus, despite having a far superior cast to the original, particularly the supporting cast, the film rarely rises above any generic action film of the recent past.

As we're introduced to a future where unmanned robots are intelligent enough to be deployed for law enforcement abroad, on the American homeland they're still illegal. The scheming private corporation that builds these robots then creates something that can woo the American citizens as well - man plus machine. RoboCop.

Largely, the plot of the film is quite like the earlier film. In fact, the tweaks to the plot actually make more sense than the original film. Also, the gritty, hand-held feel adopted this time round is more in sync with the kind of films we're used to today. But what really lets the film down is its screenplay. 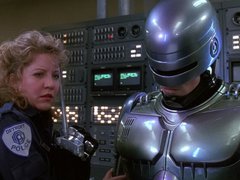 Predictable to the core, the film pretends to have twists and turns, but they are ones that can be spotted from a mile away. Like the original, it attempts to be a commentary on American capitalism and political hypocrisy as well. For example, it seems quite typical that American-built robots are being used outside the country for law enforcement, but aren't used on American soil. But these attempts come across as too blatant, instead of the pulpy satire that the original managed to pull off.

There is also an attempt to highlight how, no matter what, a beating human soul trumps cold machine intelligence. This, however, is so half-baked that it comes across as looking juvenile.

Surprisingly enough, Brazilian director José Padilha, of the cult Elite Squad fame, doesn't manage to leave a stamp on this film. It comes across as far too familiar from the word go, and not one sequence stands out or stays with you post the film. You wait with bated breath, for instance, to see RoboCop come to life in full glory, but when it eventually happens, it falls flat.

If there is anything in the film that stands out, it is the supporting cast of the film; namely Michael Keaton as Raymond Sellars, the boss of OmniCorp, and Gary Oldman as the conscientious Dr. Dennett Norton, the man responsible for creating RoboCop. The two of them, in their respective cheesy roles are absolutely top-notch. They overplay their characters just right, for a film like this.

On the other hand, one wonders what in the world Samuel L. Jackson was doing, embarrassing himself as the loud television host Pat Novak. Swedish star Joel Kinnaman plays the role of Alex Murphy and RoboCop, but he just doesn't get enough scope to perform. It almost seems like he was merely going through the motions.

There's some fun to be had in watching RoboCop spar with Rick Mattox, a robot controller and tactical advisor who despises the idea of a hybrid robot-human. However, this doesn't have too much overall impact on the film, because it isn't devoted too much time.

This new RoboCop is mere dejá vu, and not of the good kind. You'd be better off catching the original on DVD, or watching Padilha's two Elite Squad films instead.

So-So, by Anup : Not an action flick

Pradeep - I have mentioned in some earlier conments that u r great as a reviewer but skip many of hollywood movies recently Robocop(Yes its impossible to catch every movie)....
And here is u ,, with the review of Robocop....Thanx
Although this movie doesnt satisfy u as a action flick because Robocop is still fighting for gaining his position in the city,,,,for the first time i have seen that ,, whole of a movie is made like its just cementing a base for its sequal,,,,,so m waiting for the sequal,,,,and expect it to be better

Anup has given this movie a So-So(Not an action flick). Anup has posted 437 comments and has rated 108 movies. See Anup's page for more details.