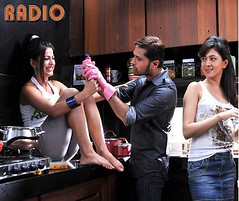 Superb, outstanding, fantastic, mindblowing - IT'S NOT! Quirky rom-com it is. Same old story told with a slightly interesting narrative style. Not enough to make a movie worth going out for.

Radio comes across as an attempt at comic-strip romance - absolutely unnecessary chapter-divisions and all. I realize the chapter titles were supposed to be funny but they fall flat after the third time they come up on screen. Points can be granted for trying to make the entire look and feel incline towards eccentric. And that was refreshing. But the story was so random that even though it was meant to add to the madness, it didn't quite work.

Especially after the funky start, the resilient radio that lasted through a monsoon and played Binaca Geet Mala 30 years ago. Wasn't it Cibaca Geet Mala and aired on Radio Ceylon at that time? Anyways, after the initial interest, the film was all downhill.

The repetitions of the meaningless "it's complicated" stamp on the chapter title cards got annoying really quick. Oh yes, and how can I forget the "mann ka radio" sounding itself off every 8th minute. One of those nice tunes which get annoying just because they stick in your head and just won't go away. Not the tune's fault I guess, but something is wrong if you are irritated with yourself while humming it.

So, however intentional the randomness might have been, it ended up only getting annoying and boring by the end. The not-so-great, not-so-bad performances of the cast certainly didn't add to the experience. That it didn't take away anything from it, doesn't say much either.

Thumbs up, by Ankit Ojha, Planet Bollywood : ...it is the screenplay that gets a completely different finishing touch. ... full review

So-So, by Nikhil Kumar, Apun Ka Choice : ... Himesh seems to be trying too hard to cement his footing as an actor because the effort he makes to get his act right in ‘Radio’ is quite apparent in his performance.... full review

So-So, by flyingrodent, Upper Stall : ...Zakir Hussain as the Punjabi father is the standout performance with the best lines delivered with admirable ease... full review

Thumbs down, by Bobby Sing, Bobby Talks Cinema.com : ...The movie moves in & out of a radio station which remains interesting in the start but tends to go repetitive and annoying towards the end.... full review

Thumbs down, by Sonal G, Bolly Spice : ...Paresh Rawal's cameo was totally wasted due to the incredibly lame dialogues given to the veteran.... full review

Thumbs down, by Taran Adarsh, Bollywood Hungama : ...The film has some melodious tracks, but how one wishes the super music was complimented by an equally superior script. ... full review

Thumbs down, by Anand Vaishnav, Buzz18 : ...If you thought Karzzz had gems, this one is a treasure chest of corny one-liners... full review

Thumbs down, by Deep, Deep's Home : ...The movie had so many flaws, very poor actors from each and everyone except Sonal Sehgal.... full review

Thumbs down, by Deepa Garimella, fullhyd.com : ...dialogues and situations are corny. For example, there's a scene in which the trio, for the heck of it, break crockery at a restaurant and make other guests do it as well. The best actors during that scene are the pieces of crockery - and the members of the audience, for having acted like they were awake.... full review

Thumbs down, by Martin D'Souza, Glamsham.com : ... The hit song 'Maan ka radio...' which has been making waves on air for the last few months does not get even a decent footage... just bits of it..... full review

Thumbs down, by Mayank Shekhar, Hindustan Times : ...The title track sounds inspired from the ethnic-electronica Deep Forest, and the sorts... full review

Thumbs down, by Rajeev Masand, IBN Live : ...unintentionally hilarious film that unsuccessfully tries to tap the youth and its preoccupation with current fads - from social networking sites like Facebook, to idle chats in coffee-shop... full review

Thumbs down, by Susan Jose, India-Forums : ...you have to accept Himesh's music is original. But the choreography and the settings of the songs will make you remember Savage Garden's Ooh I want you, Shania Twain's Don't be stupid, Khuda Ke Liye's Bandeya, Ronan Keating's When you say nothing at all and Backstreet Boys' Get down.... full review

Thumbs down, by Mihir Fadavanis, india.com : ...since Himes bhai doesn't resemble Brad Pitt, it is hard to digest the fact that two saucy, intelligent girls have the hots for him.... full review

Thumbs down, by Shubhra Gupta, indian express : ...Radio’ also uses that other word ‘closure’ before it, well, closes. ... full review

Thumbs down, by Gaurav Malani, indiatimes : ...Himesh Reshammiya lacks screen presence so much so that when he is pondering on a park bench, Neena Lalchandani overshadows him. Neena who, you ask? The inscribed name to whom the park bench is dedicated to.... full review

Thumbs down, by Amrita, Indiequill : ...Pooja being a selfish, needy, emotionally manipulative ass who we’re supposed to find sympathetic because she… uh… let me think… breaks plates at restaurants? I got nothin’... full review

Thumbs down, Movie Talkies : ...there is no doubt that Himesh has improved immensely from his last outing as an actor... full review

Thumbs down, by Anupama Chopra, NDTV : ...Vivan and his women, Shanaya played by Shenaz Treasurywala and Pooja played by Sonal Sehgal, constitute cinema's most banal ménage a trios. ... full review

Thumbs down, by Ashok Nayak, Now Running.com : ...Some of the dialogues are so funny, so cheesy and so corny that you can't help but explode into peals of laughter every time Himesh utters a word.... full review

Thumbs down, by Joginder Tuteja, Now Running.com : ... the songs are soothing but they are so many and come in quick succession that they tend to become distracting after a whil... full review

Thumbs down, by Gaurang, Passion for Cinema : ...Radio is indeed hip and cool. And is also a lesson in the progressive modern life fundas and lingo.... full review

Thumbs down, by Tony, Radio Sargam : ...My pet dog Babloo can show more emotions than Himesh has in this film and Babloo does not sing through his nasal – which is a plus.... full review

Thumbs down, by Great Bong, Random Thoughts of a Demented Mind : ...Within the first few minutes of the movie, we are told his character drives the best of cars and he is “awaaz se famous”.... full review

Thumbs down, by Dipen Shah, Rediff : ...Shenaz is passable but newcomer Sonal really needs to improve her acting skills if she wants to retain her career... full review

Thumbs down, by Sonia Chopra, Sify Movies : ...The main sore point is that the divorce is shown as the wife’s fault who screams incompatibility and files for divorce even as he begs her not to.... full review

Thumbs down, by K N Gupta, SmasHits.com : ...The audio track is a true winner and reinforces his expertise, both as a singer and a composer. ... full review

Thumbs down, by Jahnvi Patel, StarBoxOffice : ...A few songs are copied from English numbers (Teri Meri Dosti is uncannily similar to Shania Twain's Don't be stupid), Jaaneman's video borrows elements from Ronan Keating's When you say nothing at all and the ladder scene between Himesh and Shenaz takes you back to Richard Gere and Julie Roberts in Pretty Woman minus the passion and chemistry.... full review

@nikhil actually @Adam is right. I've apologized on the Paa Review page. I should be more careful.

@sushil aah! My grandpa used to listen to it all the time. Thanks for the info. And yes, cheers for the good times! ;)