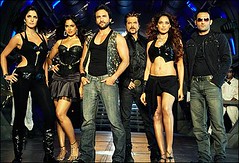 A couple of not-so-unique yet brilliantly done action sequences and a few breathtaking aerial shots might make you want to watch in the theaters. But the acting, the merry-go-round plot twists, and the dialogues are barely average.

Race has got its audience hooked with its slick promos and peppy music. Even its romantic number "pehli nazar" has a certain lilt about it that has everyone from the radio jockeys to my 6 year-old son humming it.

Unfortunately, however, there is no interesting information other than the synopsis and character sketches floating around the net. The 7.4MB press-kit (Downloads) on the official web-site too is geared more towards people who are interested in ogling at the extremely good-looking cast. Of course, we do have a write-up on the director duo and the producers, but nothing new on the movie. Anyway, here's hoping that the movie is more than just the cast looking good.

No doubt, some of the action sequences and a few of the aerial shots can be enjoyed only on the big screen. But, barring these, there isn't anything spectacular about the execution. In fact, a good many departments are just about mediocre - acting, dialogues, set design. And I am not even talking about less superficial things like character and tension build-up.

The screenplay for Race seems to be in a race with itself at, at least, a couple of levels. (Sorry, the use of "race" was just too irresistible!). At one level, we have one sub-plot waiting to chop into action as soon as the previous one is done. At another, each sequence is trying to outdo the other in terms of "gotcha! You didn’t see that coming now, did ya?"

The narrative was interesting till it maintained the scheme of letting the audience know a little more than the other characters in the movie. Later it becomes the regular "Guess who's the bigger fool?" for the audience too. And in a way, you can take a fair guess at what is coming. If it's not going to be the obvious, it's going to be the opposite of the obvious, so there you go.

The good thing though is that the women too have an actual role in the scheming. Don't worry guys - its Bipasha, Katrina and Sameera - they won't let you down if you are here for the skin show. They are not great at emoting. Anyway the story is more about their devious minds and not their emotions.

You don't really feel for any of the men either. They are all so engrossed in outsmarting the other that they forget to feel deceit or love. There is this one-off expression by Akshaye Khanna that makes you laugh - intentionally, intentionally, so it's alright. It was all too funny, to see the actors complementing each other's acting skills on screen. Just in case no one else did that?The Karamchand-Kitty gig mimicked by Anil Kapoor-Sameera Reddy is rather tedious and so is the monologue by Johnny Lever.

The dialogues do sound very labored. A lot of labor seems to have gone into searching the internet for sms jokes. Then they are laboriously forced into the flow of the story. The one-liners range from adult, as in they are 18 years old, to sexual-innuendo adult.

The action sequences weren't fresh either. The one introducing Saif Ali Khan, and the climax, are executed really well, but there's nothing unique or stunningly creative about them. I absolutely enjoyed some of the aerial shots. Especially, the winding roads (South Africa, supposedly) with the backdrop of the rugged terrain indeed make you feel like whizzing past them. And if it's a Ferrari, who's complaining?

What seemed rather amateurish, especially considering it is a high budget movie, is the art design. Good thing a lot of it was outdoors. From the hospital in South Africa to the tacky signboards that said "Department of Home Affairs" or "Stallion". Even movies on a shoestring budget do better than that. Or this song "Khwab dekhe jhootha mootha" with its ugly pink stars in the background which reminded me of a shabby set in Marigold.

"Pehli nazar" always sounded good and, sans Atif Aslam in your face every 4th second, looks good too. The title song and "zara zara" are foot-tapping numbers. And they do have purpose, you see. They are strategically placed after a twist/turn/roll in the tale. So, the audience can ruminate over the recent events of the story. Another purpose that they dutifully serve, of course, is to promote the movie. And whoever chose the songs that would go into the promos did a great job. Because the songs that didn't make it are really awful - "dekho nashe mein" and "Khwab dekhe jhootha mootha".

Having said all that, I must say there is something about the movie that made it work overall. I don't know exactly what. Because each department has some major flaw or the other. It just maybe that the departments synergized well enough to let it have a general "one-time watch" feel.

Save for a couple of stunts and some of the many aerial shots Race doesn't really warrant a trip to the theaters. If the director duo, were woken up in the middle of the night and asked, "Ultimately, who won the Race?" They are going to be flummoxed. Or maybe not...they might just say, "Dude, WE DID!!!" Because, we, the audience love our cheap thrills and there hasn't been anything glossy around for quite some time. So we will be compelled to flock the box-office. Oh well, so be it.

Thumbs up, by Manasi Paresh Kumar, Deccan Herald : ...But among the ladies, it is Katrina Kaif who delivers a knockout punch. She breaks her image of a delicate flower!... full review

Thumbs up, by Harshita Kohli, indya.com : ...Overall the film is not bad but a large amount of credit for that goes to the editor and to Allan Amin – the man behind all the action... full review

Thumbs up, Intermission, The Bookeazy Blog : ...Brilliant is not the word for the twists and turns(which by the way are plenty) in the plot which take the story ahead.... full review

Thumbs up, by Vijay, MovieWalah : ...more twists and turns than the curves on Katrina, Bipasha and Sameera combined together!... full review

Thumbs up, by Hanumant Bhansali, Radio Sargam : ...Shiraz Ahmed’s story and screenplay deserve a merit for his fine piece of work... full review

So-So, by Nikhil Kumar, Apun Ka Choice : ... crammed with unexpected twists and turns that after a while you naturally begin to expect the unexpected from the film.... full review

So-So, by Anand Vaishnav, Buzz18 : ...In spite of shock value, the narrative is not gripping enough and unnecessary comedy scenes just add to the length of the film.... full review

So-So, by Deep, Deep's Home : ...Now a day’s PC games have more logical scenes than the one they were showing.... full review

So-So, by Rajeev Masand, IBN Live : ...instead of the clever one-liners you'd expect in a smart thriller, you get cheesy quips that make you cringe with embarrassment... full review

So-So, by Amit R Agarwal, merinews : ...the best song of the movie “Pahli Nazar Mein…” is a perfect example of how to spoil a beautiful song with grossly unimaginative filming.... full review

Thumbs down, by Amodini, Amodini's Movie Reviews : ...All the 6 characters are paper-thin, not a shred of believability is left after Abbas-Mastan are done with their work.... full review

Thumbs down, by Khalid Mohamed, Hindustan Times : ...Anything goes, explodes, whams, splatters in the name of MASS entertainment.... full review

Thumbs down, by Sreeram Ramachandran, M TV : ...kind of jokes that would leave a second standard kid ostracized and without any friends had he tried narrating them to his fellow 7 year olds... full review

Thumbs down, by Anupama Chopra, NDTV : ...So, stars don’t walk into frame, they strut... full review

Thumbs down, by Phoenixnu, Passion for Cinema : ...Anil Kapoor…will he ever get out of that wannabe JHAKAAS look and feel.... full review

Thumbs down, by Raja Sen, Rediff : ...Akshaye Khanna has the film's main role, and while his smirk and his shrug manage a couple of lines alright, this really isn't a performance to talk about.... full review

Thumbs down, Urge to Fly : ...I'm disputing the categorization of Race as a thriller only because it failed to excite me, or provide any thrills... full review

Not Interested in Watching, by why am i so chicken fat dvd

Want to Watch, by Gina

Yay! Thumbs Up, by how to get facebook Likes for free

Ranveer Singh (Saif Ali Khan) is a shrewd businessman who runs a stud farm and bets on races. Rajeev Singh (Akshaye Khanna) is his alcoholic brother who is basically a good-for-nothing. As fate would have it, problems come their way, and they find a unique way to resolve them.

[...] Meetu likes the action sequences but is also frustrated with the merry-go-round plot twists. [...]

[...] like to sum up (this summing up of reactions) this post with a few lines from Meetu’s review: Don’t worry guys - its Bipasha, Katrina and Sameera - they won’t let you down if you [...]

Boy Johny Lever used to be the only redeeming factor of Abbas-Mastan flick..if he was also boring then the movies' a definite No-No for me..

Thanks for saving my money !!

Well Sudhir, there were people who absolutely lhuuuuved Johny Lever. It didn't work for me...

Hee. I found most of it pretty flawed too, and the components didn't quite add up. I guess I was somewhat reasonably entertained; I think I only looked at my watch twice during .... Except for having female characters who DO something and a few glimmers of fun from Saif and Akshaye, this was overall dull for me. What a waste of potential!

Now why do i think its going to be another boring movie with a star cast?

[..] I was warned by Meetu about Race; but I seem to be an incorrigible glutton for punishment and went to see it [..]

Oh well, damage done Sudhir! I hope better half enjoyed it at least :)

Well she loved it..and was cursing the movie analysis of PFCites as well :)