If only you couldn't have figured out whodunnit by mid-point, you'd have been horrified better

You are really trying to solve the puzzle along with the characters. There are enough pieces laid out for you. You want to piece them together but you struggle to fit it together. And then puuufff! You do it. Then your job is to just lay back and see it unfold. Your involvement has disappeared. Now, how far your puuufff moment is away from that of the film's big reveal moment determines if the movie did it well or not. Unfortunately, for Raaz Reboot, you figure it out some time around interval and there is long lag between that and when you're told.

Other than the “why” horror films barely have anything new, right? The “how” is merely a matter of details like:
- Where will blood-colored liquid spookily drip from? - What is going to pop out from the wash basin?
- When the lead lady looks up scared, what shape would the spirit have taken?
- When will the priest be called in?
- Which religion(s) will the priest belong to? Which religion will finally succeed?

And the “why” is interesting only until you've figured it out. Raaz Reboot checks the above list and does a bit more. However, there are a few things that it does or avoids that make the first half engaging. Like the pieces of the puzzle itself – the marital disharmony, the secret, the couple's other relationships. Also, the film doesn't leave its protagonists alone. These are smart people who go seek help or at least try to, instead of braving it by themselves. So, you don't have the usual horror film question, “why won't she just tell her best friend?” 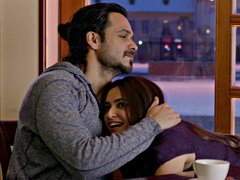 Yet, there are way too many gaping questions about motivations like, “Now why would one behave this way if one knew that?” I am not even talking about the supernatural mumbo-jumbo.

Fortunately, the performances are above what we have come to expect from films in this genre from this production house. Now, Kriti Kharbanda and Gaurav Arora have a lot of chemistry-free, flat moments. But, individually, they do well to scare and be scared. I enjoyed Emraan Hashmi's performance too. He keeps you guessing to the best of his capabilities. That he is let down by the writing department is another story.

I was engaged more than I expected to be. I had inadvertently tight muscles till the culprit was obvious. But then again, I scare easily. If you want to be spooked but not too seriously, you could just skim through this one when there's nothing else on TV.

Thumbs up, Bollywood Hungama : ...On the whole, RAAZ REBOOT offers an unconventional horror story that will leave you haunted and scared. If you are an enthusiast of supernatural thriller/horror movies, get ready to be shocked and surprised with this one. ... full review

So-So, by Rohit Bhatnagar, Deccan Chronicle : ...Though the film has a few scary scenes, it ends up being a clichéd love story instead of a horror flick. The music by Jeet Ganguly, Sangeet and Sidharthy Haldipur is melodious, especially the title track. However, the movie doesn’t really offer you a solid reason for watching it. ‘Raaz Reboot’ isn’t a must watch this week, catch it only if you are an ardent fan of the Raaz franchise. ... full review

So-So, by Jaiwantika Dutta Dhupkar, fullhyd.com : ...RR does have a ghost, but is probably not a horror movie. It's a mediocre, post-nuptial drama with a ghost thrown in as an afterthought. Watch this one at your own risk. ... full review

So-So, by Vishal Verma, Glamsham.com : ...As far as RAAZ REBOOT is concerned, it's just an extension of the money making franchise which at the most strictly manages to please the diehards. ... full review

So-So, by Renuka Vyavahare, Times of India : ...This overstretched drama is way too cliched and soppy to hold your interest but it does amuse you in its own unique ways. ... full review

Thumbs down, by Sreeju Sudhakaran, Bollywood Life : ...The biggest raaz about the film is why this is even called a Reboot, when there is nothing new Vikram Bhatt has to offer. Apart from an interesting twist, the rest of the film is just bland! Watch it at your own risk. ... full review

Thumbs down, by Sidhant Shori, Desi Martini : ...Raaz reboot has one thing going for it; It’s not boring. You may enjoy the movie, but it’ll be for all the wrong reasons. The plot is disjointed and makes no sense whatsoever. The less said about the acting (save for Emraan Hashmi, who was decent), the better. Raaz is a horror in no tangible way. It’s almost so bad it’s good. ... full review

Thumbs down, by Rahul Deo Bharadwaj , Desi Martini : ...One more point Vikram Bhatt seriously needs to get someone who can approve good music for him. Frankly I do not recall when was it that a Vikram Bhatt movie had one song that you could at least listen till it played. ... full review

Thumbs down, by Rachit Gupta, Filmfare : ...Raaz Reboot is amateurish and very forgettable. In fact, most of its horror sequences are so random that they evoke laughter instead of fear. That can never be a good proposition for a horror film. ... full review

Thumbs down, by Johnson Thomas, Free Press Journal : ...The climax is atrocious to say the least. The music plays an important role here too – but it’s not as good as the original’s sound track. The background score makes eerie original sounds but it fails to rouse either fear or fervour. The cinematography manages to capture the cold, dark and depressing atmosphere quite well, the furniture looks antiquated and the actors give shrill a whole new meaning. ... full review

Thumbs down, by Rohit Vats, Hindustan Times : ...Raaz Reboot is a tough watch for close to 140 minutes. Great songs, but not enough to pull it out of the spirit’s grip. ... full review

Thumbs down, by Tatsam Mukherjee, india today : ...Raaz Reboot might still go on to make money, like its predecessors in the franchise. But do we as the Indian audience need to assaulted with such banal, comical horror every single time the Bhatts have some money to make a film? Nope. So if you still go ahead and spend money on a movie like this, you DESERVE more movies like these. And thou shalt not complain about the poor state of horror movies in India. Thou absolutely shalt not.... full review

Thumbs down, Indicine : ...Conclusion: The movie which was supposed to kick-start the Raaz franchise is looking more and more like the death nail to the franchise. The spooky moments are few and far between, and even the ones which are there aren’t quite as impactful because the effects are stereotypical and the Vfx is downright insulting to the audience. They should have spent more time on rendering the Vfx. Ignoring all that, Raaz Reboot doesn’t work as a film either because the narrative is too slow and the pacing too uneven. ... full review

Thumbs down, by Surabhi Redkar, koimoi : ...Raaz Reboot is a classic fail at coming even little close to scaring you. I need to reboot my memory to have watched this! A 1.5/5 for this one! ... full review

Thumbs down, by Mayank Shekhar, MiD DAY : ...Besides a couple of ‘Raazes’, one loses count of how many such pictures Vikram Bhatt has filmed in the past — Intehaa, Aetbaar, 1920, Shapit, Haunted etc. etc. Sure, it’s predictable stuff. But that’s to do with the genre, which like mindless comedy, is fairly easy to judge or appreciate. ... full review

Thumbs down, by Jaidev Hemmady, Movie Talkies : ...If that was not all, the amateurish CGI effects are so laughable that there is no chance of being afraid of anything that the film throws at you. When I heard that the film has been set in Transylvania, I had hoped against hope for a story flirting with the legend of Dracula, but alas! It all boils down to old-fashioned revenge and predictable twists and turns. The music is totally forgettable and except for Hashmi's 'bad boy' charm, there is nothing really worth watching in the film. ... full review

Thumbs down, by Kunal Guha, Mumbai Mirror : ...In the climax, Shaina, who has had a spirit vacuumed off her, sits by a serene lake and notes how the ice covering it has melted. Over the course of this film, so have our brains. ... full review

Thumbs down, by Troy Ribeiro, NDTV : ...Overall, Raaz Reboot is mediocre fare and may appeal only to fans of the Raaz franchise. ... full review

Thumbs down, by Manisha Lakhe, Now Running.com : ...By the time the music has lulled you into thinking you have heard these tunes before, thankfully spirits have emerged from the possessed girl in a black smoke and crashed into the windows and it is daylight again (the ushers in the theater have opened the 'exit' doors for you). It's a relief from this terribly rehashed story. ... full review

Thumbs down, by Namrata Thakker, Rediff : ...In a nutshell, Raaz Reboot has the same old stuff that we have seen a zillions times. So unless you love watching horror films that make you laugh, stay away from this one! ... full review

Thumbs down, by IANS, Sify Movies : ...Overall, Raaz Reboot is mediocre fare and may appeal only to fans of the Raaz franchise. ... full review

Thumbs down, by IANS, Zee News : ...Overall, "Raaz Reboot" is mediocre fare and may appeal only to fans of the "Raaz" franchise. ... full review

I like all part of Raaz. This is also best trailer ...

jitendra has given this movie a Yay! Thumbs Up(45). jitendra has posted 1 comments and has rated 1 movies. See jitendra's page for more details.