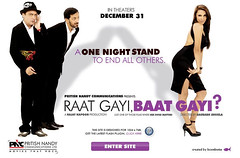 It happened one night. Or did it? A boy and a girl met at a party - only they are middle-aged. They are drunk, they are naughty. Is it inevitable for physics-chemistry-biology to play their role? If 'it' happened, would it be 'that' happened? If 'it' didn't happen, is it okay, even if the thought of doing the unmentionable occurred to both parties. Is it worse if one of them is married and the other is only attached without legalities coming in the way? All questions that might plague any drawing room conversation in urban suburbia. They are put forth subtly and with sensitivity. Also to maintain interest there is a nice build-up. But unfortunately it's towards an unworthy climax. So much so that everything thus far seems in vain.

But, you look back and you realize though they didn't leave an impact there were interesting characters spread through the film. Each of the friends in the group is going through a different phase in his/her life. An elderly couple has come to terms with life as is and has found their way to enjoy it. Another couple seem to have a wonderful understanding of each other, so much so that they seemed to be bored of each other. And hence get themselves into situations that can complicate life. It might seem that they do it unnecessarily but maybe that's their way of keeping life interesting. Another couple is going through the initial phase of incompatibility, getting upset, and lovey-dovey cajoling. The interactions in the group tell you that even the simplest of people have complicated emotions.

While the performances of most are as you'd expect - Rajat Kapoor, Ranvir Shorey. The one surprise is Dalip Tahil. Let alone talent, just seeing him do something different is refreshing. Thanks to whoever cast him, we get to see a non-caricatured Dalip. Also, one thing that I've always admired about Neha Dhupia is that though she does typical roles of a seductress, the films she chooses to do them in have something different about them. Here too she plays the mystery woman, pretty efficiently. Had it not been for the low budget-induced low-quality texture of the film, I think her performance would have been more effective.

Thumbs up, by Chanda Gohrani, AOL INDIA : ...‘RGBG’ is a classic example of a story with no depth but the screenplay makes it look great, thereby proving that it’s not the story but the way it is told that makes the difference.... full review

Thumbs up, by Bobby Sing, Bobby Talks Cinema.com : ...smart and intellectual kind of movie which more or less depends upon the entertaining verbal conversations between its characters. ... full review

Thumbs up, by Sarita Tanwar, MiD DAY : ...If you are in your mid-thirties or early forties and are still watching teen comedies (and cringing), here is an option. Raat Gayi Baat Gayi talks to you.... full review

Thumbs up, by Jahan Bakshi, Now Running.com : ...So while I'm not particularly hung over on this one, competent performances by the cast, however power this one through to make it eminently watchable.... full review

Thumbs up, by Sonia Chopra, Sify Movies : ...The script is simple, but what really endears you to the film is the characterisation. ... full review

So-So, by Nikhil Kumar, Apun Ka Choice : ...A wry comedy with its share of oddball characters not uncommon from the ones in previous films by the Rajat-Vinay-Neha gang, ‘Raat Gayi Baat Gayi’ gives you a slightly déjà vu feel of having been there and seen that.... full review

So-So, bigoye.com : ...Although slow and dragging at some parts, Saurabh Shukla’s take on modern urban society and changing moral values is close to reality.... full review

So-So, by Anand Vaishnav, Buzz18 : ...Shukla's mastery over acting and writing shows in the way he handles his actors and the witty lines he gives them. As a technician though, he isn't able to execute the written material with the same punch.... full review

So-So, by Martin D'Souza, Glamsham.com : ...Rajat as the Casanova husband dons another hat and comes up trumps. Iravati Harshe as the confused wife who seems to know the truth is excellent... full review

So-So, by Rajeev Masand, IBN Live : ...Not so much a raucous comedy, Raat Gayi Baat Gayi is in fact a slice-of-life 'relationship movie' in which characters yak solemnly and endlessly about fidelity and betrayal.... full review

So-So, by Gaurav Malani, indiatimes : ... The scene where a tarot card is being picked and predicted over the phone is hilarious.... full review

So-So, Indicine : ...The movie was an unsatisfying experience primarily because of four reasons. ... full review

So-So, by Subhash K Jha, Now Running.com : ...Shukla, who can be quite a funny-guy on demand, has made a quirky, sometimes crisp, sometimes placid, look-see at marriage and infidelity.... full review

So-So, by Crazyrals, Passion for Cinema : ...Especially funny, yet silly, is Vinay’s fight for righteousness when he knows he is wrong... full review

So-So, by K N Gupta, SmasHits.com : ...Director Saurabh Shukla succeeded through his large and intelligent cast and their witty dialogues to depict an awkward incident that happens though sometimes in today's real life. ... full review

So-So, by K K Rai, STARDUST : ...Rajat Kapoor, who plays the part of Rahul, looks the character perfectly. His mannerism and body language perfectly suits the character of a flirt husband.... full review

So-So, by Nikhat Kazmi, Times of India : ... Nevertheless, the film does augur for interesting viewing, providing an opportunity for a roll call of the entire current art house ensemble cast.... full review

So-So, by flyingrodent, Upper Stall : ...The music is minimal but not bad, couple of good tracks by the new family band led by Ankur Tewari do flow in... full review

Thumbs down, by Ramya C, fullhyd.com : ...The actors are all good, though Rajat Kapoor looks tired sometimes; the women look good, and Neha Dhupia, in clothes that apparently belong to the director's 3-year-old grandchild, looks hot;... full review

Thumbs down, by Anupama Chopra, NDTV : ...Characters strain to sound poignant even as they make incredibly inane conversation. ... full review

Thumbs down, by Ashok Nayak, Now Running.com : ...RGBG, no doubt has a very innovative approach to one night stands and marital infidelity but the script is not at its finest... full review

Thumbs down, by Hanumant Bhansali, Radio Sargam : ...Saurabh Shukla’s direction is not as great as his acting.... full review

At a party in a bungalow, a couple is seen flirting when they are alone in a room. They seem strangers, are they? Something seems morally wrong, is it?

Each frame is about whether or not one character in the film slept with another one. There is hardly any other talk. So, I'd say not to be watched by kids.

Really looking forward to this movie, specially after knowing how Neha loves to flirt ;)

BTW!! All you Bollywood fans out there check this out…We are looking for Bollywood’s next diva in a first ever online contest. check the amazing videos here.
http://www.desitara.com/talent/contest/Ticket+To+Bollywood

oops! Thanks for pointing the mistake out Datta.