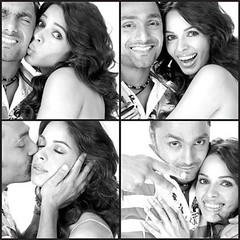 Pyar Ke Side Effects pleasantly presents the phases an average urban man-woman relationship goes through – hooking up, breaking up, and making up. The script does stick to its basic aim of narrating a light but neat story but the narration loses focus after the first hour. The hooking up phase is kept lively with humour and the making up part is short and thus sweet. However, the breaking up phase drags, the characters become very predictable and it is really sad to see them do the silliest things.

The characterization of the lead pair is pretty accurate, i.e. a man in Rahul Bose’s situation and mind-set would behave like Rahul does and so would a woman in Mallika Sherawat’s shoes. Rahul also speaks to us through the movie and has done a great job of switching between talking to his co-actors and us. Mallika does have a very girl-next-door-face, I can't see what the hype is all about? Her dialogue delivery and acting (if you can actually call it that!) is very plain. However, it is the rest of her that could get a few hearts thumping, oh now I see… However, if you are there to see some talent, its Rahul’s comic timing that pulls the movie through. Unexpectedly though, the two of them together look fantastic. For a change, the intimate scenes between the lead pair makes us feel that the couple is actually attracted to each other!!

The other actors are very ignorable; they are either too loud or too flat. However, it does not strike us immediately because the dialogues perfectly suit the characters in the first half of the movie. It is towards the intermission, that the dialogues start losing their charm and in fact become a tad redundant. The concept of Rahul acting and speaking to us intermittently is carried a bit too far and thus ends up being repetitive and non-entertaining by the end. The direction style is different, but unfortunately different is not necessarily always the best. Some really funny lines and analogies lose their effect because of the number of times they are mentioned. The dialogue-writer needs to understand, that we got it the first time! The supposedly touching scenes do not really have an impact. The music doesn’t do much for the ears, especially for people who are not into the night club culture. The choreography isn’t very exciting either.

What sort-of saves the movie is the fact that the story doesn’t waver and is very smooth right till the end. The costume designers and make-up people need special mention because the characters were not dressed like they were out to party 24x7. Thumbs up to the story, Rahul’s acting, and costumes. But a great opportunity was lost because it didn’t look like enough attention was paid to the other departments.

Thumbs up, by Subhash K Jha, Glamsham.com : ...The narrative is maneuvered by a vivacious impulse... full review

So-So, by Neha Kewal, Apun Ka Choice : ...On the whole, ‘Pyaar Ke Side Effects’ is not infectious. But it does promise 2:20 hrs of enjoyment and fun.... full review

So-So, by Prema K., Bollyvista.com : ...Mallika Sherawat is a surprise package. No oomph at all.... full review

So-So, by Ekanshu Khera, Planet Bollywood : ...One only wishes more attention was paid to the pace of the film.... full review

So-So, by Nikhat Kazmi, Times of India : ... But soon the narrative loses it’s zing and the commentary becomes predictable and didactic.... full review