A Muslim community bonds happily with a Hindu neighbourhood. Both live and die for each other. A Hindu boy enters the scene. This so-called, dashing hero bumps into a Muslim girl and immediately falls for her. He woos her tirelessly (as if he has nothing else to do). They sing, dance and eventually share passionate romance. And suddenly all hell breaks loose. We all know this story. Countless amount of Bollywood, romantic films (majorly of the 90s) have followed the path of success with a similar premise. Then, how can Pyaar Vali Love Story – a romantic story of the early 90s – be an exception to this overused, success-guaranteeing formula?

Think of SRK-standard romance dramas, Rohit Shetty-styled action flicks, mindless songs and dances, over-the-top dialogues - combine these and the end result is Pyaar Vali Love Story. From producers to director (who previously directed dull, but widely successful Duniyadari), cast to technicians, everything about the film looks really promising. I’ve nothing against another Hindu-Muslim love story. All that really matters is its portrayal. Apparently what you get is a serious let-down.

Set in the backdrop of 1992 Mumbai riots, Pyaar Vali Love Story recounts the romance of Aliya and Amar, and their struggle to stay together. Sai Tamhankar tries hard to appear as a Muslim girl, but in vain. In fact, every other Muslim character looks like they are trying too hard to look so, throughout the film. Right from the beginning, all they speak is the unconvincing mishmash of Hindi and Marathi words. Our filmmakers have continually failed to convincingly depict non-Marathi characters in Marathi films. This film is no different. It appears more and more unreal as the story progresses. Just by donning Muslim costumes or uttering Urdu words, you don’t seem Muslim. There are many other factors that come into play. This is the failure of the writers, casting directors, production designers, costume guys as well as make-up department. 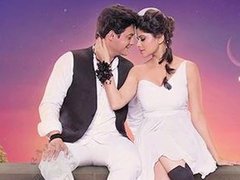 Sanjay Jadhav’s abilities are more questionable than anybody. The man in charge is himself to be blamed for going ahead with such an outlandish, lacklustre script. Had the plot been written thoughtfully, it could’ve still done wonders despite its inherent predictable nature.

The film’s lead actor, Swapnil Joshi is the biggest disappointment. I don’t understand why this talented actor is trying to be the Shah Rukh Khan of Marathi cinema? Instead of exploring his acting, he has made himself busy playing chocolate hero. He is getting repetitive and tedious with every film. Urmila Kanetkar’s Nandini is bold, yet annoying. Nevertheless, she is far more bearable in an otherwise mediocre film.

In the film, Aliya fondly calls Amar ‘stupid’. On a serious note, the word aptly suits the story. Insanely stupid to be more precise. This one is absolutely not worthy of your precious time and money.

Set in the early 1990s, Pyaar Vali Love Story narrates the romantic story of Aliya and Amar. Their life takes a new turn in the backdrop of 1992 Mumbai riots.