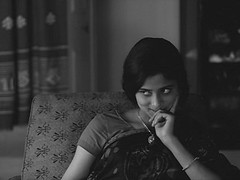 Pratidwandi (The Adversary) is one of Satyajit Ray’s finest works and does well to chronicle the struggle of an intellectual college drop-out to find a job in Calcutta in the 1970s, even as some of his close friends surrender those ideals, ‘stop thinking and start doing’. The influence of French New Wave is apparent in this film, as are the parallels drawn to the city’s struggle under its set Leftist rule. Watch it to get up-close to the frustrations of a Bengali struggler.

The commonly believed theory that adaptations of books don’t really turn out into good films, will come in for a reality check, if we dig deeper into the sheer amount of regional literature that has successfully been adapted for screen. I’ve salivated much over Satyajit Ray’s debut film Pather Panchali (adapted from Bibhutibhushan Bandyopadhyay’s novel).

I spent last week admiring another of Ray’s gems - Pratidwandi, this one based on a novel by Sunil Ganguli.

Part of Satyajit Ray’s Calcutta Trilogy - Seemabaddha (Company Limited) and Jana Aranya (The Middleman) being the other two that followed - this film is wonderful chronicle of Calcutta of the 1970s, through the eyes of an unemployed intellectual, Siddhartha (Dhritiman Chatterjee), who is a college drop-out and struggling to find a job. The film beautifully captures his frustrations, insecurities, the ideals he clings to, even as people around him seem to slowly find a footing as ‘doers, not thinkers’.

Ray also shows a grasp over the changing gender equation of those times, where it was observed that qualified (and let’s say attractive) women would find a job quite easily than men. Siddhartha’s sister, Sutapa (Krishna Bose) represents that shift, and is shown not only to be earning a modest salary, but also is slated for a fat pay-hike, wants to pursue modelling and has enrolled for ballet classes. Siddhartha’s amazement at this gender shift - “Didi, you’ve changed a lot” - is well documented.

Ray’s cinematic technique is one of the highlights of this film. The influence of French New Wave cinema is evident thanks to the frequent jump-cuts, stylish visual metaphors and impulsive dream sequences. All of them not add some chutzpah to the storytelling, but also put together a diverse assortment of thoughts inside Siddhartha’s brain. I especially liked the way his mind is transported to a certain Biology class, when he sees a woman crossing the street.

The character of Siddhartha is essentially the soul of the film and his insecurities are such that viewers can easily relate to. His predicament of finding a job is shown to be a rather painful process. The interview screening scenes are tributes to Ermanno Olmi’s gem The Job (1961), and right from the nervous interviewee biting his fingernails, to the lack of seating arrangements, the screenplay does justice to depict the anxiety of the intellectual Bengali struggler in the 1970s. A highlight is Siddhartha’s job interview scene - his answers set the tone for what is to follow in the course of the film.

I loved the way Ray has used close-ups in the film. Siddhartha’s calm plea for silence when he feels he’s being lectured at, his desire to shoot his enemy at sight, his transformation into a revolutionary in a second, his scorn for the rich and wealthy, and his disgust for foreigners high on dope, are acute observations that define his nature. These are little moments, but they add great value to character development.

Siddhartha’s own search for a worthy job runs parallel to his search for a bird, from his childhood memories. The film does well to tie the two searches together, till the end.

Although set in the Calcutta of the 1960s, Pratidwandi continues to be relevant considering the city’s current state of affairs. Employment is still a major issue. I can tell you from personal experience, that the quiet and composed Bengali ‘intellectual’ that Siddhartha personifies in the film, still is a topic of playful mockery and often runs the risk of sounding too frank and candid about his loyalties and preferences, when he appears for job interviews.

Pratidwandi is certainly one of Ray’s best works. I’m not sure if it’s a DVD which you’ll revisit again and again, unless for academic purposes. Nevertheless, it’s a fine story about ideals being compromised under pressure from reality. Watch it not just for Satyajit Ray, but also to get an easy understanding of the mind of a struggler, stuck in a Leftist state where opportunities are few, but to embrace them, something has to give - soul, ideals or temper.

Yay! Thumbs Up, by acropoliseamit84_gmailcom : as a movie maker, a movie where ypu can learn a lot.

as a movie maker, a movie where ypu can learn a lot.