While you are in awe with how they managed to make a 2-year old single-handedly hold our interest through the film, Pihu is still a 90-minute long Public Service Announcement for making houses child proof.

You know the times you chide yourself for being paranoid because you are thinking of all the what-ifs that could happen to detroy your life as it stands for you today. Simple things like leaving the gas on when you leave your house or your house being burgled while you were away. What if I told you all your worries are well-founded because such things happen in real life? Pihu exposes the character Pihu (Pihu Myra Vishwakarma) to each and every thing that could be dangerous for a toddler in an upper middle-class house making the film a documentary on child safety. You can’t help but notice that even as you spend an hour and a half in awe of how well they had the little child perform. And you have to remind yourself that the marketing strategy used was just not right.

The beauty is even without any of the things done well, the very idea of making a film that banks completely on two little shoulders is commendable in itself.

Despite being a thriller that brings the crawls under you skin because you don’t really want to watch what you are watching – a 2-year old is in constant danger, for goodness sake! – Pihu strikes you as a really well-made film. Right from the creative and effective opening title sequence to the way the tension builds up, right till the manner in which the climax is handled, Pihu has some brilliant directorial decisions. For instance, through the ninety minutes Pihu is hardly ever shown talking, the times you hear her voice hardly ever overlap with the times you see her on screen. It is cleverly edited and the editing has contributed to make it seem real. The popping balloons or other sounds such as the ticking clock, dripping water, humming geyser, and hissing iron are other smart ways in which the audience is kept on its toes adding to the thrill.

These decisions are surely enough to give a pass to a couple of weird scenes like the one that is from the point of view of a chapati 1 in a microwave. The scenes in which the child who belongs to obviously messy parents is so intent upon cleaning up strike as awkward too, but who knows cleanliness might not be a nurture thing. ¯_(ツ)_/¯

And of course, all the credit of having a 2-year old perform just the way they wanted has to go to the director. I was very aware through the film of how they must have gotten Pihu, the child actor, to do this or that. Now, whether a child – actor or not – should have to cry or be scared or see herself being around a corpse for 90 minutes when she grows older is a humanitarian question I will never be able wrap my head around.

It is also well-written just for its depiction of a two-year old’s behaviour such as a child’s capacity to entertain oneself, or how she gets used to a situation or sound and ignores it, or how a child pushes the envelop to grab attention, or the things they learn just from observation, or their disregard for obvious danger and yet they know not to cross a line, or how self-important they are, or how they won’t do what you want them to do and do exactly that one thing you don’t want them to. 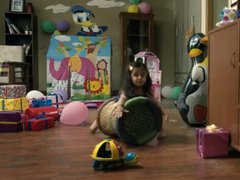 The writing is nuanced from other points of view too. I especially like how without actually telling anything, the film showed us how a remorseful man, aloving father could also possibly be a wife-beater. In fact, it reaches out to the audiences emotions – I noticed myself squirm when a child listened in on an adult conversation even though I knew it is unlikely the child grasped its meaning.

The beauty is even without any of the things done well, the very idea of making a film that banks completely on two little shoulders is commendable in itself. For that alone, Pihu can be a one time watch. And anyway, if we have to watch a drama of a human being trapped in a house better Pihu than Trapped. On the other hand, encouraging movies that borderline abuse child rights seems just wrong.

And you have to remind yourself that the marketing strategy used was just not right.

Thumbs up, by Madhuri V, Filmi Beat : ...Pihu deserves to be watched purely for Myra Vishwakarma's applaud-worthy performance that matches the brilliance of a seasoned actor. Could we have some more of this little kid, please? Read more at: https://www.filmibeat.com/bollywood/reviews/2018/pihu-movie-review-and-rating-myra-vishwakarma-279350.html... full review

Thumbs up, by Umesh Punwani, koimoi : ...All said and done, Pihu will disturb you in many ways but at the same time will somewhere create a sense of responsibility. Yes, a lot was shown in the trailer but that may be because makers wanted to pull you to the theaters to watch the film? Watch it for its novelty factor and a very good performance by Pihu Myra Vishwakarma.... full review

Thumbs up, by Nandini Ramnath, Scroll.in : ...Myra’s lack of artifice and seemingly unrehearsed actions – she has been given a credit in the screenplay – lends her situation the required poignancy. Pihu’s inability to string together complete sentences and tendency to get easily distracted keeps the movie on a trot for much of its 93-minute running time. The heart-stopping moments leave their mark even when their outcome is known, and it’s a relief when the endurance test, both for Pihu and audiences, comes to a halt. This has been a year for comedy at the movies, but Vinod Kapri has delivered a bona fide suspense thriller that doubles up as a parenting lesson. Effective, yes, but also unsettling? Always.... full review

Thumbs up, by Subhash K Jha, Sify Movies : ...Yogesh Jaini's camera lets little Pihu do as she likes. The camera is a stoic bystander in this tale of a domestic idyll gone horribly wrong. The background score (Abhishek Rey) remains remarkably liberated from over-punctuation, coming on with a frugality that spotlights the vulnerability of the protagonist.... full review

So-So, by Anna MM Vertticad, FirstPost : ...Kapri deserves applause for the manner in which he has directed her without needlessly trying to underline her cuteness. At no point does she appear to be acting. And Ms Vishwakarma is such a darling that it is impossible not to be invested in Pihu from the moment the camera first zeroes in on her. I found myself occasionally smiling at her antics, in awe of her inventiveness, charmed by her apparently spontaneous reactions to her dilemmas and confusions, admiring Kapri's ability to capture all this, and clenching my fists out of concern for her welfare, so paralysed with fear for her that I could not look away from the screen till the very last second of the film. Now excuse me while I get my blood pressure examined by my doc.... full review

So-So, by Johnson Thomas, Free Press Journal : ...This sort of scare-mongering might have been more believable if Kapri had made the screenplay more inventive – with the adult characters doing more to redeem themselves, and relied less on the two-year-old’s largely implausible spirit of adventure. Even so, there are a large bouquet of heart-stopping moments woven into the narrative, to give the thrill seeker a fair amount of joy!... full review

So-So, by Suhani Singh, india today : ...As the minutes tick Kapri's urban horror show becomes familiar. When the focus turns to unseen adult voices, the script's weaknesses are apparent. Like Trapped, Pihu also attempts to show how easy it is to get lost in a crowded city but the situations here aren't as compelling. But your eyes won't move from the adorable Pihu whose parents need to be schooled on parenting and apartment safety.... full review

So-So, by Kunal Guha, Mumbai Mirror : ...Pihu hopes to give you a taste of how it would be if your minor was left at home alone without adult supervision for an entire day. But given the low voltage jolts in this one, your chances of suddenly dropping dead in a screen near you are less likely.... full review

So-So, by Rohit Vats, News18.com : ...Pihu grips you by the neck and doesn’t let your bat an eyelid. However, it could have helped a whole lot if it had a tighter second half.... full review

So-So, by Sukanya Verma, Rediff : ...It may not be a flawless work of film-making but it has something valid to say about lousy parents.... full review

So-So, by Pallabi day purkayastha, Times of India : ...This unusual thriller has all the elements you'd expect from a film that can attain cult status. In all fairness, the story does throw up a few nail-biting moments, too. But the inconsistent writing and direction by Vinod Kapri robs the movie of its desired impact. With a little more attention to detail and conviction, this one could have been a terrific experience.... full review

Thumbs down, by Anupama chopra, Film Companion : ...These attempts to up the emotional stakes fall flat because they are repetitive and obvious. And it feels like each time Vinod is confused about what to do, he has a character call on the cell phone. Pihu doesn’t have a lot of dialogue and some of it is very awkward – at one point, Pihu’s angry father says to her mother on the phone – You females are the worst thing in any man’s life!... full review

Thumbs down, by Raja Sen, Hindustan Times : ...This is Baby’s Day Out without humour, and Trapped with a pint-sized Rajkummar Rao. It is a wannabe-horror version of Home Alone that makes no sense as a film — unless the producers are actually planning to launch a new line of baby-monitors. Here the child constantly tries to clean things, sweep things, serve her mother, as if conditioned for chores like a little mini-maid. Infants deserve better. Remember that in Bringing Up Baby, the best film to ever have a Baby in the title, the baby was a tiger.... full review

Thumbs down, by Manisha Lakhe, Now Running.com : ...What could happen if a two year old is at home with her mother? Nothing, unless the mom ODs on sleeping pills and then everything turns into an almost disaster for the child. An open balcony, a fridge, kitchen with knives, appliances, electrical sockets and more entice the child to certain death. Unfortunately instead of the story, the headache inducing camera angles which can be best described as toddler cam offers unintentional horror. This simply exploits the kind feelings people have towards... full review

Thumbs down, by Namrata Joshi, The Hindu : ...Kapri wants to do too much — make an edge of the seat thriller, comment on modern day marriages and nuclear families and the heightened presence of technology in our lives. He does justice to nothing.... full review

Great review! So true. What an uncomfortable movie... in many aspects. I have a 1 year old daughter and thought I could watch it but couldn't make it past the first 15 mins. hah! Noope.

Sandy has given this movie a So-So. Sandy has posted 1 comments and has rated 1 movies. See Sandy's page for more details.