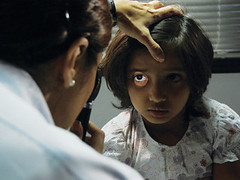 RGV dons new avatar. He’s now moved on to comedies. Ok, not 100% comedies because there are 2 strong serious scenes which put a plug on the most natural sounding laughter track playing in the audience

NOT A REVIEW - Just getting all set to be scared and to question my beliefs...

I have not been a huge fan of horror movies. I can't handle the creeps given by a spooky background score, along with a camera following the character, to imply someone's following the said character. The tension gets too much. Over time though, I have grown some nerves and have come to handle gore, and remind myself that the characters are not going to jump out of the screen. Nevertheless, what the director Ram Gopal Varma says about Phoonk in his interview with Baradwaj Rangan, comes as a relief -

The interesting part for me is that it’s beyond a horror film, beyond the “scary” genre. It is very scary, because of the backdrop itself, but the more interesting part – which I think is novel in such a film – is that I’m hoping it will create a debate among both believers and non-believers.

Wow! The motivation is really intriguing. Any movie that bases its plot on a theological, philosophical or psychological debate is not only commendable in the current realm of Hindi cinema, but also can be extremely fascinating in absolute terms. The official site goes on to say -

"Phoonk" is the story of a confirmed atheist whose belief systems are shaken up when his loved ones are subjected to unspeakable horrors by forces whose very existence his rational mind refuses to accept. It is also the story of a fanatical devotee who is forced to turn her back on God in the face of traumatic experiences.

And on his blog -

In "Phoonk" I attempted to use the above aspects of human psychology to accentuate fear. I went to the extent of attempting to make people feel not safe even with idols of Gods around.

My beliefs lie somewhere in between. So, it will be very interesting to see how I react to the movie, and whether I'm able to identify with either of them.

Meanwhile, can't stop laughing at this one on RGV's blog

Comment: I think watching Aag will be scarier than Phoonk. RGV's Ans: Let’s make a deal. If you shut up about Aag, I swear on your mother that I won’t make another Aag.

So, Ram Gopal Varma wanted to scare and make us question our beliefs. Well neither happened. What did happen though was discovery of RGV, the deliverer of a 1000 laughs. Ok, we are fair around here - about 700 hundred of those cackles came in the first half. The rest were interspersed between a couple very strong scenes post-interval.

Just in case you haven’t guessed yet, there’s nothing remotely scary about Phoonk. Unless of course, ogling crows, out-of-focus soft toys and wooden artifacts getting predictably into the limelight give you jitters. Then there’s the heavily made-up Ashwini Kalsekar who has a fetish for charcoaled eyes. Unfortunately, even the 45 degree tilt in her head doesn’t manage to evoke the fear factor. The spooky background music might have succeeded in some kind of horror, had it been used a little less than the entire 120 minute run-time.

The entire duration is also a mechanical collage of one event following the other. The individual scenes too are a collection of random shots cut and pasted together. Had there been even an average amount of flow, maybe the plot and sub-plots thereof would have been coherent enough to touch my belief system.

Yeah too many ifs and buts. But it was possible. Because, being a non-superstitious person, I had completely surrendered myself to a movie about black magic. Without such submission there was no hope of enjoying this one. But, that didn’t work either.

Baby Ahsaas’ act though, is really moving. She has very clearly exhausted herself in exhibiting what her character went through, and done really well too. My heart went out as much to her character as to the child artiste herself. On humanitarian grounds, is it really fair to have a 10-11 year old child go through the enactment of such torture? It’s the same question I had when I saw The Sixth Sense.

It’s truly not the question of whether or not one believes in the premise of black magic. It’s how believably it’s put forth. Such an issue should have ideally made me think of how I’d react if something like this happened in my family. But, as audience I’m kept at such a distance from the procedures that it’s almost as if the makers don’t want to get me involved. Employing the standard techniques used for the horror genre neither terrified me nor made me think about the topic at hand.

Ps. Yay! I actually managed this one without mentioning Aag. Damn it! No…failed yet again…

A family finds itself the target of a black magic practitioner.

Phoonk - Review &raquo; without giving the movie a

RGV dons new avatar. He’s now moved on to comedies. Ok, not 100% comedies because there are 2 strong serious scenes which put a plug on the most natural sounding laughter track playing in the audience...

Yep,Mayur, no luck whatsoever.
g, I didn't mention most of the things that you talked about, because I really didn't enjoy them.
Maker, cool!
ROFL, mimi
srinivas, I really didn't like the technical work either.
Well, Vijay, I know sometimes we do laugh to cover our fear, but I was really laughing at the movie, nothing scared me at all.