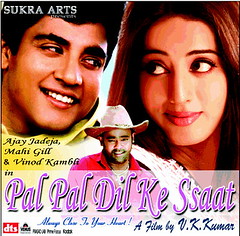 To be fair, maybe there are four voices and not just two. The dubbing in this film made me realize what an important role it plays in our experience. Not that there are too many great lines to remember this film by, but even if there were it would have been difficult to enjoy them because you are trying to figure out which language the actors were originally speaking in. By the end, I concluded that they lost the script during dubbing and entirely different dialogues were used instead of the original lines said while shooting. Sure, every time dubbing is off-synch it's distracting, but here it is so off that it was difficult to even figure out whether the actors were emoting or just saying the lines.

Such is the impact of this film that if you see this one before Dev D or Gulaal, it will effect your enjoyment of Mahie Gill's brilliant performances in them. If a fine actor's act is questionable, do I really need to talk about the acting skills of questionable cricketers? Another change in career is on the way for both Vinod Kambli and Ajay Jadeja, hopefully. Actually, Vinod Kambli's character has no specific function in the film!

There is an off-chance that the film was desperately trying to spoof not-so-well-thought-out Hindi films. Which could explain a child artist playing a producer, his adamant demand for an "item number", the disgruntled writer who will tell his story to anyone who is willing to lend an ear, the random fights, songs, continuity jumps, shoddy editing, etc. But I have a feeling this is more my brain working overtime rather than the scriptwriter giving his script an iota of thought.

Each scene accentuates the bewilderment, "How could they not see how stupid it is!?" At various points in the film, the body language of the actors is such that you wonder whether they were briefed on the emotion required at all. They just seem to be doing their own thing like a 5-year old would get naughty in a school concert rehearsal. This is highlighted in the songs. There seems to be no instructions at all. The choreography seems to be reserved for the action sequences where you can see the actors trying to remember the next step.

This is certainly one of those films that you can't really complain about. Because with every complaint the voice in the head either goes, "What were you expecting!?" or, "Why bother?"