An unusual experience. The first half, when nothing happens is engaging because of the arresting Himalayas+cinematography. The second half, when the story moves at breakneck speed, is boring.

I’ve come to realise that the only newness that can be added to the “boy meets girl” formulaic story, is the setting. Outside of this setting, there is little-to-zero scope of making things drastically different. Earlier it used to be families who would come in the way of their union, now it is ex-boyfriend. Pal Pal Dil Ke Paas does brilliantly on the setting—the Himalayas and adventure sport. Unfortunately, the mountains disappear in the second half and the many attempts, at infusing life into a done-to-death theme, aren’t fruitful.

Post-interval then the film becomes a showreel for Karan Deol.

Beyond the intrinsic beauty of the mountains, the crew has gone beyond excellent cinematography. They have recceed out many untouched spots and shot them with finesse. And then, while the additional layer of adventure sports can seem gimmicky or a forced attempt to be different, it is done really well. Over and above the camera work, the sound design and the confidence with which Karan Deol goes through the adventure sequences, make the scenes believable.

In the non-adventure bits though Karan Deol barely has any variation in his dialogue delivery—if it can even be called that. Even if he is calm and ever-so-cool, he would emote. His sava kilo ki aankhen1 of course, try their best to emote. And it wouldn’t be breaking news that he has inherited his dad’s dancing genes, would it? Sahher Bambba, on the other hand, looked like she could do meatier roles.

Anyway, much of the good that the Himalayas and their picturization do is more than undone by the tardiness of the second half. The complications added by politicians and the ex-lovers dramatics are resolved rather too hastily. In fact, all the developments in the over-extended second half are wrapped up in the last 5-7 minutes. Post-interval then the film becomes a showreel for Karan Deol. He romances, he packs punches, and so on.

Interestingly though, despite being a star son’s vehicle, the film gives enough room the lead lady’s story. This is the most I must have seen a lead lady’s character be at her job in a recent Hindi film. Now it is a different matter that she still needs her “man” to edge her on in her hobby and actually completely forgets her hobby when the man shows up. 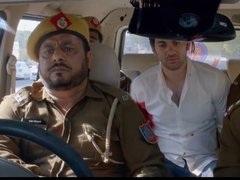 In general though, I was pleasantly surprised that a film launched by the family for the next generation even bothered to have a story. So, it was a bonus to have enjoyed half the film, and we will take the little joys when they come by.

So-So, by Bobby Sing, Bobby Talks Cinema.com : ...Summing up, it’s not the characteristic of a true fan to keep praising a weak or poor project, claiming it to be a great effort made hiding the brutal truth. A true fan of The Deols will let them know the reality so that the mistakes can be duly rectified in the coming future. And the reality is that PAL PAL DIL KE PAAS is a very poor attempt that is neither going to help Karan nor Sunny in their respective careers. It however might help Saher to a limited extent for her much better portrayal.... full review

So-So, by Subhash K Jha, Bolly Spice : ...But where-oh-where is the heart in this heartbreakingly bare plot? There is so much that Sunny Deol could have done to ensure a smooth debut for his son. Instead he ensnares the film in clichés, and finally leaves us with an over-long film that is gasping for breath after having run itself frantically into a corner.... full review

So-So, by Urmimala Banerjee, Bollywood Life : ...Pal Pal Dil Ke Paas is perfect for those craving for somewhat masala love stories with a bit of everything. The newcomers do their best but are let down by a half-baked story.... full review

So-So, by Analita Seth, Filmfare : ...Just one question before rounding up: Did the makers see the film before releasing it? Did they realise that more than half the film has no lip sync? It's so badly dubbed. Isn't that like basic stuff? What was the editor doing? Poor guy must have dozed off seeing the fare on screen. But what really gets to you is the abrupt ending. There are no explanations, no closure. You don't know what happened to the love birds? Did the MLA and his son get their just desserts. No nothing. Nada. Maybe it was a blessing in disguise.... full review

So-So, by Madhuri V, Filmi Beat : ...Watching Karan Deol-Sahher Bambba's 'Pal Pal Dil Ke Paas' is like trekking a mountain. It comes with its own highs and lows. While the film is appealing to the eyes, it falls short of being a memorable love trip because of the inconsistent plot.... full review

So-So, by Monika Rawal Kukreja, Hindustan Times : ...Pal Pal Dil Ke Paas is definitely one of your run-of-the-mill love stories, but it makes you smile, cry, laugh and brings a sense of freshness.... full review

So-So, by Gaurang Chauhan, Times Now : ...Overall, Pal Pal Dil Ke Paas is a visually stunning film with some good tunes but the movie somehow misses the mark due to its overlong length and a mediocre screenplay. Sahher Bambba impresses.... full review

So-So, by Ronak Kotecha, Times of India : ...It’s evident that director Sunny Deol wanted to make a pure, simple love story. However, with a meatier story and better etched out characters, this one could’ve soared.... full review

Thumbs down, Bollywood Hungama : ...On the whole, PAL PAL DIL KE PAAS has an outdated storyline, with just the mountain scenes and Sunny Deol’s direction saving the day to an extent. As a result, the film will have a very tough time at the box office.... full review

Thumbs down, by Rahul Desai, Film Companion : ...This is a nice piece of character-building; it even inadvertently explains his curious facial inertia. And the next morning, they pet a snow leopard.... full review

Thumbs down, by Johnson Thomas, Free Press Journal : ...Saher is predetermined to out the camp’s many failings and this leaves the gates open for some fireworks on the romantic front. But the narrative fails to take off to the histrionic heights it was contrived for. Karan is rather insipid, callow and unassured. Other than the stunning camerawork by Himman Dhameja and Raghu Dharuman, there’s really nothing much to look forward to here!... full review

Thumbs down, by Shubhra Gupta, indian express : ...Early on in the film, a character says: ‘stop, please stop’. You wish someone had listened.... full review

Thumbs down, by Umesh Punwani, koimoi : ...All said and done, I’ll choose rather not spending any ‘pal’ on this film. Watch a travel show if you really are into scenic locations. Because once you watch this film, it’ll scar you for life.... full review

Thumbs down, by Mayank Shekhar, MiD DAY : ...He's a sweet, quiet li'l boy; looks a lot like his father from certain camera-angles as well. He's giving it his best. So is the audience, one hopes. Hey, and don't feel sorry for the audience, okay. They're still getting some good education on eye-liners, and other one-liners, if nothing else. Feel slightly sorry for the kid. I'm sure he'll survive (this film, and otherwise). And there's always good stuff in Manali to see him through.... full review

Thumbs down, by Kunal Guha, Mumbai Mirror : ...When the film’s hero, an adventure sports guide, points to a gushing rapid and proudly announces, "Yeh clients ka favourite can-yawning spot hain," it almost feels like he’s touched a necessary nerve with the audience. After all, it’s ingeniously intuitive to pick up on drowsy levels across the screen.... full review

Thumbs down, by Saibal Chatterjee, NDTV : ...Pal Pal Dil Ke Paas lacks the freshness that one would expect from a film with a new romantic pair. The reason is obvious: the plot is as old, but not as sturdy, as the hills.... full review

Thumbs down, by Sukanya Verma, Rediff : ...Despite tacky styling and unflattering makeup, Sahher Bambba -- bearing an uncanny resemblance to an early-day Tanushree Dutta -- cuts a plucky and vivacious picture. Karan Deol is not much of an actor. He seems like a good kid though, as Indian parents love to say, 'acha bacha'. But emotions simply do not flow out of him. At times, he looks and sounds like a helpless lamb until his comfort in adventure sports and occasional Sunny-style screaming says he is capable of intensity, one that would need a better director than his dad to tap.... full review

Thumbs down, by Namrata Joshi, The Hindu : ...Unlike the other release of the week, The Zoya Factor, it’s the young heroine who walks away with the film. She seems more comfortable in the presence of the camera. Just as it happened in Betaab, It’s like Sunny’s debut with Amrita Singh almost 35 years ago. History does repeat itself.... full review