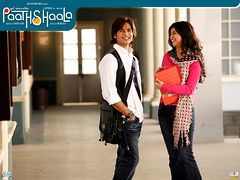 There seems to be absolutely no limit to exaggeration. I understand the greed for money and bureaucracy is rampant in the most private of corporations, including schools. But, to showcase the entire corporate and publicity sector as the meanest, most heartless people is a bit too much. Our rotting education system needs desperate attention, but spare me the lop-sided one, please.

Boy, do we have a superlatively inept schooling system or not? I should know. Educated myself in degrees I never had any hope of being interested in. The brilliance of the system (teachers, parents, government, and the kids) is that I didn't even realize it! It didn't even occur to me that I could have a creative streak? A complete 180 degree overhaul is a must, in everyone's attitude, including the students themselves. A powerful medium called cinema many a time takes the responsibility of showing us our flaws. Paathshaala is rather regressive, in this age, when more and more schools are trying their best to get out of the rut. Unfortunately, the film does such an awful job, that you want to hold a mirror for them. So, let's give it a shot.

Getting the credit-where-it’s-due part done with - At any time, dealing with a non-standard topic to make a Hindi film is a huge risk, so that is something I really appreciate. Also, whether I like it or not, a point of view is presented on a contemporary topic. Also, it'd have been so easy for the writer/director to have plugged in romance, the ensuing songs and maybe even a related complication or two. But the refrain is evident. Also there are some sweet moments every once in a while.

You'd think someone who's smart enough to make that decision will also use logic, at least partially, in the rest of the story. But apparently that's too much to expect from an FTII product (I wouldn't have said that, if he hadn't tagged it with his name in the titles!). So, you pick a pertinent issue and then go ahead and pick the most extraneous factor to focus on. I mean, "schools becoming businesses"! I could've borne the issue - you know, audience has no say in what topic writers should choose in the first place, right? But, there are just SO many things wrong with the examples and sub-plots chosen.

First of all, how can 100% of the people involved in reality shows and publicists not be so inhuman? You want to stereotype directors of TV shows, ok. Granted. But assistant directors, photographers, agents…everyone is living without a heart? And then you have some more heartless people in the management of this school.

If these things are not agonizing enough, you have other inexplicable silences and characters blind following other characters without any rhyme or reason. So many tiny sub-plots seemed like they were there to squeeze in a point which might or might not flow with the rest of the screenplay. For example, the Hindi and Marathi teachers don't like the fact that Rahul (Shahid Kapoor) was an English teacher. Not only do we not know why they carry such an attitude, but it conveniently changes in the very next sequence!?! And such short stories are in abundance. And let's not even get to the laughable climax to the main story.

In this ambience, Nana Patekar, Ayesha Takia and Shahid Kapoor do the best they can with this lame script and inane lines. Even at their worst, each three of them could have chosen a better script than this. Oh well…

Schooling is not so superfluous. The argument that school facilities to be updated in moderation is half-baked. Monsters don't rule television shows. And the evils of money-making is just way too "old-school".

By the way, what's so wrong about a school being profitable? Also, how does charging more fees make a school evil, if they are providing the facilities? And what is so wrong with having good infrastructure? Isn't access to latest possible technology a necessity rather than luxuries? It's not like the intention was to build a school for the poor, if you think teaching has to be philanthropic. No clue why teachers shouldn't be paid competitive salaries. And no clue where that money will come from, if it's not from hike in fees. Another profession that nobility is demanded of is doctors. Why should a person who has spent 27-28 years of his life educating himself not earn for himself?!

Thumbs up, by Subhash K Jha, Now Running.com : ...While Basha Lal's cinematography is free of poetic flourishes, the "Ae Khuda" track just sweeps you off your feet... full review

So-So, by Nikhat Kazmi, Times of India : ... The film does slog somewhat, specially in the second half and tends to lose momentum due to a loose script and an unimaginative screenplay.... full review

Thumbs down, by Noyon Jyoti Parasara, AOL INDIA : ...the director makes a satire out of the media too, shifting focus from his original aim.... full review

Thumbs down, by Aparajita Ghosh, Apun Ka Choice : ...The problem with Paathshaala is that it tries to have a say about too many things in too little time. ... full review

Thumbs down, by Roshni Mulchandani, Bolly Spice : ...Ayesha Takia is practically wasted and what's the deal with her taking on the dual role of matron and nutritionist?... full review

Thumbs down, by Taran Adarsh, Bollywood Hungama : ...It has a lot to say, but the predicament is, what translates on celluloid is not razor-sharp.... full review

Thumbs down, by Bollyfan, Cinemaa Online : ...I want to strangle someone – the person who created the concept of reality shows. Not because they’re boring, predictable and a waste of the viewer’s time, but because they’re the reason for the biggest waste of film stock in recent times. ... full review

Thumbs down, by Deepa Garimella, fullhyd.com : ...While the clean-scrubbed waist-jacket-toting Shahid is unconvincing as a teacher, his attempts to bring in cinematic weight to the proceedings fly in the face of his measly role.... full review

Thumbs down, by Martin D'Souza, Glamsham.com : ... its time for the entire production unit to go back to school. ... full review

Thumbs down, by Khushbu, Gomolo.in : ...a lovely concept but the screenplay and the execution of the film has bungled up that concept big time! ... full review

Thumbs down, by Rajeev Masand, IBN Live : ...originated from an earnest idea, but one that's developed into a dimwitted, harebrained film. ... full review

Thumbs down, by Shweta Parande, IBN Live : ...all this is random and does not sync the way it should in a film... full review

Thumbs down, by Kaveree Bamzai, india today : ...Why was this film ever made? What was Shahid Kapoor thinking? That he could be another Aamir Khan? ... full review

Thumbs down, by Shubhra Gupta, indian express : ...The camera lingers on the stream running down his leg, and you know the sort of film `Paathshaala’ is going to be : loud, obvious, minus any nuance. ... full review

Thumbs down, by Sanjukta Sharma, Live Mint : ...There is absolutely nothing that is subtle in this campus film.... full review

Thumbs down, by Tushar Joshi, MiD DAY : ...crumbles under its own weight... full review

Thumbs down, Movie Talkies : ...Ayesha goes through the film smiling, while Shahid tries his best to play the crusader teacher with full conviction. ... full review

Thumbs down, by Minty Tejpal, Mumbai Mirror : ...the direction is embarrassing at times, with long dialogue being repeated ad nauseam, while many scenes appear to have neither beginning nor end nor any context.... full review

Thumbs down, by Anupama Chopra, NDTV : ...Paathshala is staggeringly inept. The script by Hanif Sheikh has no discernable arc... full review

Thumbs down, by Sampurn, real bollywoood : ...Director Milind Ukey who gave us the very lovable animated film Hanuman has got a good topical subject on hand but falters big time in the script written by producer Ahmed Khan himself.... full review

Thumbs down, by Preeti Arora, Rediff : ...No school can send children for a reality show audition without explicit consent from the parents. The crew behind reality shows is loud-mouthed and offensive. ... full review

Thumbs down, by Shilpa Jamkhandikar, Reuters : ...The teachers in this school aren’t any better — they also sing, dance, wear inappropriate clothes and generally do everything but the things you are expected to do in a school.... full review

Thumbs down, by Sonia Chopra, Sify Movies : ...It’s over dramatised to the point of ridiculousness. And these manipulative tricks are shameful to say the least. ... full review

Thumbs down, by Janhvi Patel, StarBoxOffice : ...Saurabh Shukla is sufficiently greedy and despicable; inspiring hatred for himself ... full review

Thumbs down, by K K Rai, STARDUST : ...his role seems to have been somewhat underwritten, quite unlike of bollywood heroes, and this makes him laidback in his approach... full review

Thumbs down, by Friday Freak, The Friday Freak : ...The students are the pick from the recent child actors coterie...the same thing that they thrash in this movie, you call it irony, I call it miscasting.... full review

Thumbs down, The Telegraph : ...More like one of those sleepy public service videos on DD about how education has become a business... full review

Thumbs down, by The ThirdMan, Upper Stall : ...Paathsaala takes cardboard characterizations and stereotypes of black and white to a new high... full review

Thumbs down, by Mayank Shekhar, Upper Stall : ...Bread-butter films of every generation have produced a common enemy the audiences can rally against week after week. It makes life for us (and screenwriters) relatively easy. ... full review

Want to Watch, by ceiling fans

Want to Watch, by Resistance Calculator

Nice take on the subject that the movie is about. Of course, this takes us to the age old debate about whether these nobel professions should be paid for or should they just live on the graciousness of the society. Who doesn't know those age old stories where witches used to cure a person for free, provided they used to provide the jadi booti, and who doesn't know the scenario where entertainers used to entertain kings and the kings would award them, not pay them, and who doesn't know the scenario where a teacher sage would teach princes and get nothing except Gurudakshina in return?

However, these aspects are quite inane in this age and world, and yes, as the movie shows, not everyone is so senseless in the media, but some of them are, and its your badluck if you encounter them and only them.

While I watched the climax, I was kind of oonfused as to who won and who lost, and how? On to Phoonk 2!

@Roy I think we are giving the topic much more thought than the entire crew did in during the entire film's making! The whole point was baseless. How could a school be as profitable as any other venture that the property owner could get into? Anyway...

Well, when they can pour crores into a movie behind that topic and come up with a dud, we can use some of our Internet to mull about what they did wrong. :D

I think Shahid Kapur is going on SRK's way. 1st Jab we met which was bit similar to DDLJ and now Pathshala which is i think similar to Mahobattein!

Phew. 0.4 out of 5 is the worst ever rating. Glad did not book tickets in advance to this. Even Deshdrohi probably would have got a better rating!

Thanks Meetu for taking this bold risk of watching this movie and hence saving many lives like mine.

@Friday Freak sure we can!

@Kalyan at your service! All for the human good :P