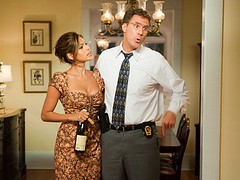 A laugh riot, The Other Guys is one of the funniest comedies to come out of Hollywood in 2010. Nominated for Best Comedy at the 2010 Golden Globes, it features some sparkling comic timing and dialogue between the two misfit, loser cops played by Will Ferrell and Mark Wahlberg. Looking for flaws in this film is a meaningless exercise - it’s similar to finding logic and reasoning in a Sajid Khan film. The screenplay still throws up enough laughs, so I’d suggest you watch this film with friends, on a relaxed weekend.

Mark Wahlberg is suddenly becoming the Akshay Kumar of Hollywood. The man with a rather straight face, is mouthing absurd, yet funny lines (“I’m a peacock! You’ve gotta let me fly!”) The same way that Akki would do in a Priyadarshan film.

Wahlberg’s traits work nicely when paired with Will Ferrell, quintessentially funny man, in The Other Guys, a film about two detectives in New York’s police department who do nothing more than mundane paperwork on existing cases, rather than be a part of adrenaline pumping car chases to nail down criminals like real investigators would.

Although Hoitz (Wahlberg) wants to go out and shoot some guns like real cops do, he struggles to inspire his geeky desk partner Gamble (Ferrell) to rise to the occasion and together, become the city’s heroes.

The humour essentially lies in their mismatch and the pairing of the two actors is funny. There is some crackling dialogue, most of which had me in splits thanks to both actors complimenting each other well. Hoitz leaves no stone unturned to let Gamble know how much he hates him, but the total nerd that Gamble is, he doesn’t mind.

Captain Gene Mauch (Michael Keaton), who plays boss to both characters is equally funny as the senior cop with a bisexual son, and who has a weekend passion of running a supermarket which sells luxury toiletries.

The film is a wonderful product placement for the Toyota Prius, the car that the lead actors use for most of their assignments. I loved the way the car’s features were embedded with Gamble’s character and mannerisms.

The writing and performances have enough to provoke laughter and these comic scenes are well-connected to ensure that the film is not just a series of gags one after the other.

There’s something about staring at Will Ferrell’s face that produces a tingling in my funny bone. He’s one of the better slapstick actors, but one who doesn’t have to try too hard to show off his comic timing.

The film is an action comedy, against the backdrop of the embezzlement of funds. There’s action - lots of it, most of which is pretty well executed. But the screenplay is patchy, a bit formulaic and I’m not sure if I can blame the writers entirely - action comedies as a genre continue to be like this. The non-stop bullying from Hoitz and Gamble’s colleagues seems forced. Moreover, I couldn’t fathom why Hoitz would want the calculator loving Gamble to join him in his investigative pursuits. How did the two become partners in the first place? A bit of history into how they met and how they became resigned to boring desk jobs, would have added some colour to the story. The sub-plot of Hoitz’s failed romance and his ability to do the ballet really well, doesn’t add up to the film’s overall proceedings in any way.

The extras on the DVD are a bit of a lip-service. There are some deleted scenes - meaningless, most of them. However, the behind-the-scenes footage of the stunts is interesting, as are the interviews with the director and the actors.

The Other Guys has got several flaws, in addition to everything that comes with a formulaic script. But it’s a funny film alright.

So-So, by Nard4Reynard : I'm amazed with the moral message. Although overall this movie quite boring.

So-So, by sinoj : Movie pretending to be a laugh riot, but actually silly and irritating. But watch, you can.

The Other Guys - Cast, crew, links

Must watch? I think you must qualify it as the most irritating must watch movie. Movie has some interesting premises, but the dialogues were so deliberate, quite silly and stuck out that though one identified with the characters, it was nauseating.

sinoj has given this movie a So-So(Movie pretending to be a laugh riot, but actually silly and irritating. But watch, you can.). sinoj has posted 1 comments and has rated 1 movies. See sinoj's page for more details.